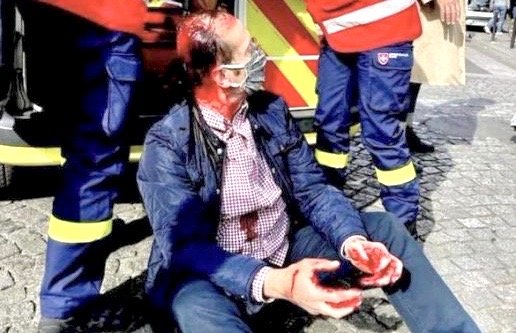 A man bloodied by attackers on Saturday, May 29 in Paris seeks help.Facebook

May 31, 2021 (LifeSiteNews) — A Catholic procession held Saturday in Paris to commemorate the killing in hatred of the faith of 10 priests and seminarists during the socialist insurrection of the “Commune” in 1871 was violently attacked by a group of communist activists and “antifas.”

One hundred fifty years after the brutal killing of 50 hostages in the popular 20th arrondissement of Paris, the “Massacre of the rue Haxo,” old resentment is still alive and the anticlerical French extreme left appears to be anxious to kindle past anger.

The extremists’ attack forced the procession to disband. Two middle-aged men who had joined the procession fell when the demonstrators started throwing garbage cans, bottles and metal fences at those who were praying and singing. One received bad scalp wounds and had to be evacuated by ambulance while covered with blood.

Some 300 people had responded to announcements in the Archdiocese of Paris and five parishes in the northeastern quadrant of the French capital — including Notre-Dame des Otages, which grew out of a chapel built in the 1930s by a Jesuit — to commemorate the martyrdom of the 10 men of God on May 26, 1871.

The procession was to cover four kilometers, following the footsteps of the 50 hostages who were taken prisoner by the Parisian insurrection against the new Republican government of Napoleon III, nephew of Napoleon Bonaparte, that had its seat in Versailles after the fall on the battlefield of Sedan in the Franco-Prussian war in 1870.

The first National Assembly of the Third Republic was constituted by a majority of monarchists under the leadership of Adolphe Thiers. Its aims were peace and reconstruction after liberal Paris had been under siege for four months and suffered much. The working class of Paris wanted war and revenge but also more power, libertarian rules with equality between men and women, the recognition of divorce, free love and children born out of wedlock.

The “Federals,” as the insurrection’s members were known, had inflamed opinion against the Catholic Church and its representatives for many weeks, and they rejected the Concordat that Napoleon’s government had signed with Pope Pius VII in 1801 after the French Revolution. The French “Commune” wanted the separation of church and state (that would be formalized some 35 years later in 1905).

This revolutionary and deeply anticlerical force was opposed by the so-called “army of Versailles.” It was constituted by the Republican forces, who were also not particularly favorable to the Catholic Church, and civil war took over the streets of Paris during the “Semaine sanglante,” or “Bloody Week,” from May 21 to May 28, with barricades, bloodshed and severe repression that led to the defeat of the “Commune.”

The 10 religious hostages who were killed in the rue Haxo were some of the many victims of the anticlericalism of the “Commune:” the cause for their beatification is now in Rome and their martyrdom could be officially recognized by 2022.

Catholics who walked, prayed and chanted in the streets of Paris on Saturday certainly didn’t expect to be attacked by those who consider themselves as the inheritors of the insurrection of 1870. They were peacefully proceeding through the Boulevard de Ménilmontant, still in some ways a popular part of town, when they suddenly found themselves at the center of a group of about 30 activists hurling insults and heavy objects at them.

One Catholic live-tweeted during the attack: “We are also praying for those who are presently insulting the Catholic Church and who look as if they came straight out of a Gremlins movie.” That was only the beginning, and appears to have come from local bars and terraces where people were enjoying the spring weather.

Amused at first, he continued, “I’m not filming because my friends and I prefer to remain in a state of recollection, but I assure you it’s worthwhile experiencing this to understand what that left wing is capable of …  A woman is screaming insults, another individual is threatening us with gas chambers and another says he’ll burn down our churches.”

Others were shouting: “Everybody hates the people from Versailles. Death to the ‘fachos’” (the “fascists”). Versailles, in the wealthy western suburbs of Paris, is known in France for its unusually large proportion of numerous families and practicing Catholics.

Hooded youths then attacked the procession with “large projectiles,” leading most of the participants to leave for safety’s sake, and a handful of friends continued their march informally. The police were there, the same person said on Twitter, “but clearly undermanned.” A few reinforcements came and chased the agressions with teargas.

Some are now asking why a demonstration of “Commune” sympathizers was authorized by the Prefecture of Police of Paris on the itinerary of the religious procession, albeit a bit earlier in the afternoon, and why only one policeman had been assigned to the security of the Catholic event, at the head of the procession.

The “antifas” proved especially violent: they wrenched banners from the participants in the procession, trampled a flag of the “Souvenir français,” a veteran organization, and even threw heavy metal barriers at the peaceful march in which many women and children were also taking part. It was at this point that one man was wounded, and many sought refuge in the church of the Holy Cross not far away. “We stayed there and waited, praying, until the police exfiltrated us,” one witness recalled.

There will be an official complaint against the assailants. However, there was little official indignation over the event. President Emmanuel Macron, who was on an official visit to South Africa, did not mention the attack, leading many to say that this would have been different if a Muslim event had been physically and verbally assaulted in the same way.

Interior Minister Gerald Darmanin published a tweet saying that “freedom of worship” should ensure that religious events take place in peace: “Thoughts for the Catholics in France.” But besides the fact that the procession had not been properly protected despite an official counter-manifestation, these mere words neither identified the aggressors nor promised that any repression would take place.

Emmanuelle Ménard, a courageous independent deputy at the National Assembly, had asked the government on Monday:

“The violent actions of a part of the extreme left have been increasing for several years and have become almost systematic against all people who do not think like them. During this procession, several sources mention the near absence of security forces to protect the route, which would have prevented this violence. Mrs. Emmanuelle Ménard therefore asks the Minister of the Interior what measures had previously been put in place to secure the procession, what action was taken by the Paris Police Prefecture from the beginning of the attacks to protect the participants and what measures and means he intends to take to respond effectively and concretely to these repeated acts of violence by these extreme left-wing activists, which are completely intolerable in our democracy.”

Archbishop Michel Aupetit condemned the aggression in an op-ed in Le Figaro.

His auxiliary bishop, Denis Jachiet, who co-organized the procession, also complained, remarking that “the objective was purely religious. There was no political claim in our initiative.”

“On the purpose of the procession, Bishop Denis Jachiet, auxiliary bishop of Paris, declared to Le Figaro: ‘The objective was purely religious, there was no political claim in our initiative.’

“Bishop Jachiet obviously does not seem to understand that it is the hatred of the Catholic religion, of its spiritual and moral values, which has always been sufficient to motivate the aggressions of the atheist extreme left.

“It does not need Catholics to adopt a political positioning in order to hate them.

“The hatred of ‘religion, opium of the people’ is still in the DNA of Marxist-Leninists and revolutionaries in general, Jacobins, Young Turks, Nazis and Communists. But all of these certainly carried out their exterminations of Christians in dozens of countries under the pretext of the harmfulness of the Christian's policies.

“It is therefore useless to try to exonerate oneself from such an accusation. The mere fact of praying for the martyrs of yesterday’s or today’s revolutions constitutes for the communists and other ultra-left groups a provocation that requires a response of liberticidal violence.

“One can always understand this in the light of the fable of the Wolf and the Lamb.

“The communist and leftist aggressors of the Menilmontant procession have once again demonstrated the need for a political order that protects the public freedom of worship.”