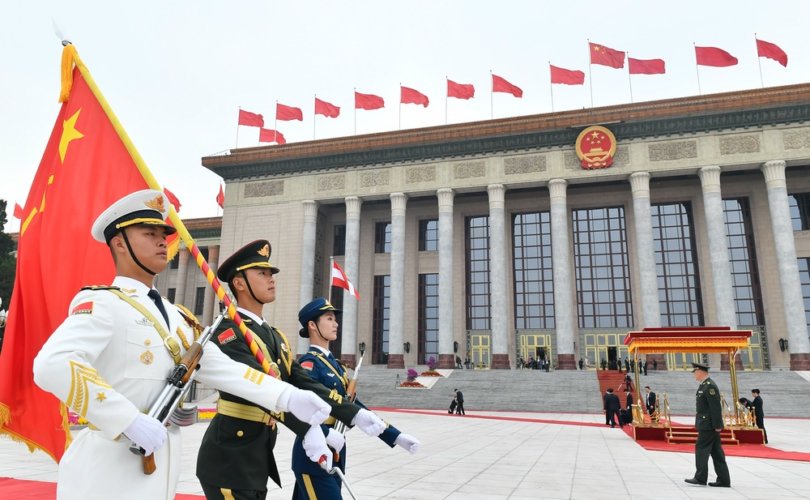 BEIJING, China, February 20, 2020 (LifeSiteNews) ― The confusion around the Vatican’s concordat with China and its state-founded version of the Catholic Church has been compounded by the failure of the so-called Chinese Patriotic Catholic Association (CPCA) to transmit the Gospel of Life.

According to expert Steven Mosher, the Chinese Patriotic Catholic Association is in lockstep with the pro-abortion, pro-contraception Chinese Communist government when it comes to life issues.

“The CPCA cannot deviate from the Party's position, since it is controlled by the Party,” Mosher told LifeSiteNews yesterday.

“Moreover, the CPCA has affirmed that national laws supercede Church, or canon, law,” he added.

“And the Party's position is that contraception, abortion and euthanasia are moral.”

An American consultant to the Vatican on China, Msgr. Anthony Figueiredo, now 55, admitted to the National Catholic Register early in 2018 that the government-appointed bishops of the CPCA support China’s totalitarian two-child policy.

“I spoke with some of these bishops and some of the officials at the bishops’ conference on issues such as abortion, the two-child family policy; and certainly in those areas, and I won’t hide this, they do back the government on those areas, because I think they feel they need to,” Figueiredo said.

“They need to because they’re part of [the Patriotic Association], there’s a loyalty to the government,” he continued.

“I think that conversion, that opening, can only take place if there is a first step and there is dialogue that’s opened. Again, it’s very much I think within Pope Francis’ thinking: ‘We’re not going to wait until everything is absolutely perfect in order to say, well, we’re now going to approve these bishops.’”

According to the National Catholic Register, Figueiredo is a “full-time consultant to the Dicastery for Promoting Integral Human Development” who has traveled to China every year since 2008 on the Vatican’s behalf. A Kenya-born priest of the diocese of Newark, New Jersey, in October 2018 Figueiredo was arrested in England for drunk driving. He was formerly disgraced ex-Cardinal Theodore McCarrick’s personal secretary for nine months in 1994 – 1995 and continued to assist the former prelate from Rome for 19 years. McCarrick, too, had an interest in China, where he travelled frequently, ostensibly on Church business.

In his interview, Figueiredo’s sympathies lay with the state-appointed bishops of the now 63 year old CPCA who, he said, deeply desire full communion with Rome.

“I’ve always perceived in these bishops, whether it was Pope Benedict or Pope Francis now, a real desire to be in communion with the See of Rome,” he told the National Catholic Register.

However, it was not at all clear from Figueiredo’s interview that the CPCA bishops were prepared to achieve this communion by accepting Church teaching on contraception, abortion, and euthanasia.

Catholics, whether they adhere to the authentic “underground” Church or attend services held by the CPCA, are a small minority in China. Figueiredo suggested that Chinese Catholics who are “underground” and whose activities are approved by the government mix and mingle.

“… When we go to these meetings, whether it’s at the bishops’ conference or at the national seminary in Beijing, which is the main seminary, or we go to other places, for example, to churches in Beijing, to speak or to celebrate or whatever, it’s almost impossible to distinguish who are these Patriotic bishops and priests and faithful and who are the underground because I think there’s a lot more collaboration, or significantly more collaboration, than we know about or perceive,” Figueiredo said.

“I’ve been in meetings, I’ve given formation at the national seminary, such as ongoing formation to priests and religious sisters, where there’s just a mix of the Patriotic and underground there together. So I think there’s a lot more going on than we realize.”

David Mulroney, a former Canadian Ambassador to China, told LifeSiteNews yesterday that he believes some priests of the CPCA do try to follow Catholic teaching.

“It is very hard to determine the extent to which the Patriotic church remains faithful to Catholic teaching on issues like abortion, because it is allowed no voice in China and is in fact under growing pressure to transform itself into an anodyne and docile affiliate of the Party, “ he said.

“That said, my understanding is that, despite their separate and isolated status, many of the clergy are guided by documents like the Catechism, which they have translated and follow as faithfully as they can.”

According to the Cardinal Kung Foundation, which is dedicated to the authentic Catholic Church in China, the establishment of the CPCA in 1957 led to the confiscation of all the Catholic Church’s property. Later some of the confiscated churches and other buildings were given to the CPCA.

Not only have Catholics and other religious people themselves been persecuted and harrassed by the communist regime, married women who have found themselves pregnant with their second, or since China relaxed its one-child policy to allow for a second, third child have been forced to have abortions. Single women are expected, or forced, to abort any child they conceive.

Steve Mosher told LifeSiteNews, “When the one-child policy was in place ― it ended in 2016 ― enforcement depended upon fines, abortions, and sterilizations, not contraception.”

“It is still illegal for young women to get pregnant if they are not married, however, so they are basically the only remaining target of the family planning workers.”