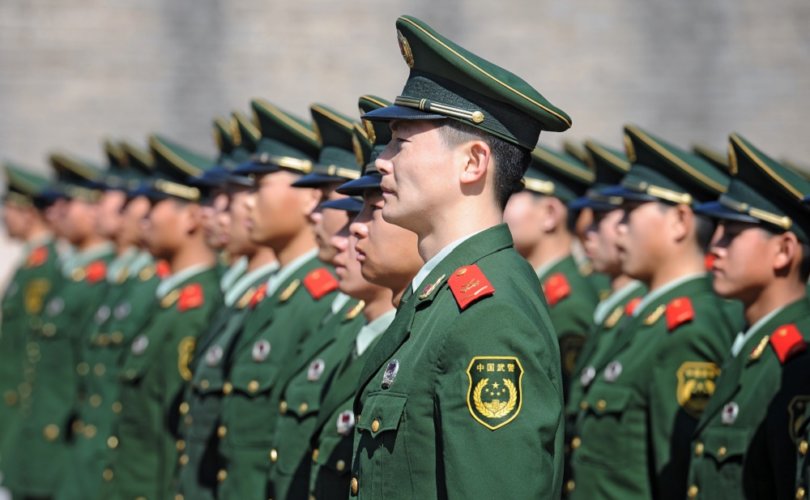 Fr. Huang Jintong, pastor of Saiqi Parish in the Mindong diocese, Fuijan province, was picked up by security forces on April 3 and taken to an undisclosed location, Asia News reported Monday.

A few hours later, police called Msgr. Vincenzo Guo Xijin, the unofficial and auxiliary bishop of Mindong, and told him to prepare clothes for his priest “because he won’t be able to come home for a month.”

Huang is one of 20 priests in the diocese who won’t sign a document agreeing to become a member of the schismatic independent “church.”

“In all likelihood he will have to endure political propaganda and brainwashing sessions to forcibly extract his membership,” Asia News reported.

Moreover, Huang’s parish of some 4,000 members was among at least five parishes of resistant priests the government closed in January, as the Mindong diocese remains a “pilot project” for implementing the Vatican’s 2018 disastrous and widely condemned secret deal with China.

Overseen by Cardinal Pietro Parolin, the Vatican-China agreement gives President Xi Jinping’s government a say in the appointment of bishops, among other concessions.

It also paves the way for unification of the state-sanctioned Chinese Patriotic Catholic Association (CPCA), and the underground Church, whose members remain united to the Holy See despite the risk of being killed, imprisoned, and otherwise persecuted for their faith.

Cardinal Joseph Zen of Hong Kong has condemned the Vatican-China accord as an “incredible betrayal,” and a U.S. congressional report released in January linked the secret deal to an “intense” spike in persecution of Christians not seen in China since the Cultural Revolution.

Asia News reported that since the agreement was signed, Xi’s regime began a campaign to eliminate the underground Catholic Church by forcing priests to sign a document attesting they will adhere to the state-run “church.”

By signing the document, they also agree to “refuse relations with foreigners, prohibit religious education to young people under the age of 18, [and] limit religious activities to within the narrow confines of churches.”

However, many priests regard signing a membership with the CPCA, which the regime appears now to be calling the “Independent Catholic Church,” as “denying their bond with the Pope and the universal Church and becoming state officials: in addition to displaying the Chinese flag on sacred buildings, one must collaborate with socialist society and support the Chinese Communist Party and its supreme leader Xi Jinping,” Asia News pointed out.

In 2018, Pope Francis asked then-bishop Guo, 61, to step down in favor of Bishop Vincenzo Zhan Silu, one of seven formerly excommunicated CPCA bishops whom the pope had readmitted to communion as part of the agreement.

While Guo agreed to step down, he never registered as a member of the CPCA, and he too has been subject to relentless harassment and persecution.

Asia News reported in January that Guo and an undisclosed number of priests were evicted from the curial building in Luojiang on the charge that it violated fire regulations and that he was sleeping on the doorstep.

However, it now reports that the regime relented on the eviction for “fear of bad publicity” and that Guo is permitted to live in the residence.

The authorities have cut off gas, water, and electricity, and the auxiliary bishop must carry water from an outdoor tap up to his fifth-floor room.

“When he goes down to the ground floor of the building, he does not forget to bless the CCTV cameras installed to monitor him,” Asia News reported.

“This way he blesses his controllers.”

The Diocese of Mindong had more than 90,000 Catholics, according to Asia News. “Of these, at least 80 thousand belonged to the unofficial Church, served by 57 priests, 200 nuns, 300 consecrated lay people and hundreds of lay catechists. The priests of the official community were 12,” it reported.

To sign the petition to join Cardinal Zen’s plea to “stop the murder of the Church in China,” go here.