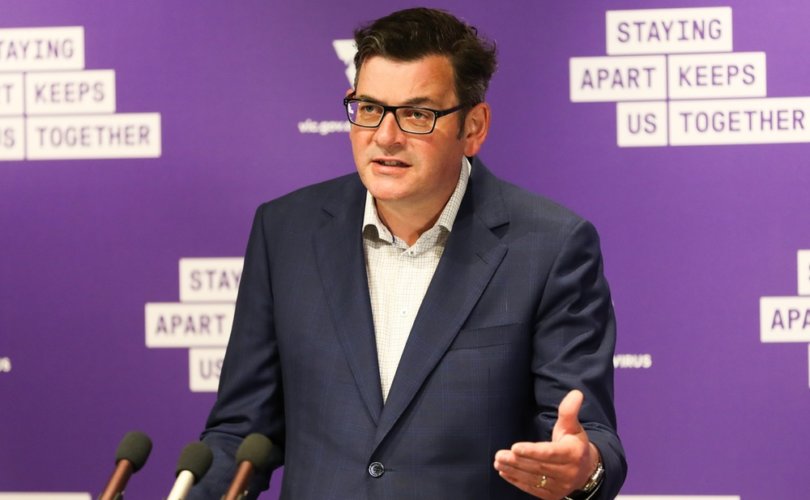 Six hundred casual contacts of the 26-year-old man, and 520 Australian Open tennis players, were asked to self-isolate and get tested, while all indoor gatherings in Melbourne have been reduced from 30 to 15.

The orders come just one day after the Victorian Labour Government launched a bid to extend its state of emergency powers until December 2021.

For that to happen a bill needs to pass through both houses of Parliament on March 15, when the current state of emergency expires.

If the bill passes, the powers will be extended in four-week blocks until December 15.

“The sorts of rules that the state of emergency underpins is the order for someone to isolate for 14 days, is the order that means hotel quarantine is mandatory, wearing face masks in certain setting[s],” Andrews said on February 2.

Andrews has received fierce criticism for his heavy-handed management of COVID-19, particularly during Melbourne’s second lockdown, which lasted from July to October of last year.

Banners and billboards reading “Sack Dan Andrews” and a satirical Twitter account of the same name have been the creative outlets of frustration for many Victorians who are fed up with the Premier’s abuse of power.

Known by detractors as “Dictator Dan,” Andrews, a baptized Catholic, is also notorious among the Australian pro-life community for ushering in an extreme abortion law back in 2008 when he was the Minister for Health.

Now a former employee of the Andrews Government is taking his criticism to the next level, submitting a complaint to the International Criminal Court (ICC) for damages caused to the Victorian people by Daniel Andrews and Australian Prime Minister Scott Morrison from extensive lockdowns.

Sanjeev Sabhlock was an economist in the state treasury, but resigned after 15 years of service after being asked to remove social media posts critical of Victoria’s lockdowns, one of which accused Chief Health Officer Brett Sutton of “massively exaggerating and misleading the entire public and politicians.”

In an interview with Australian economics YouTube channel, In the Interests of the People, Sabhlock said that if submissions to the ICC are rejected it usually happens swiftly, but after two months his submission is still being reviewed.