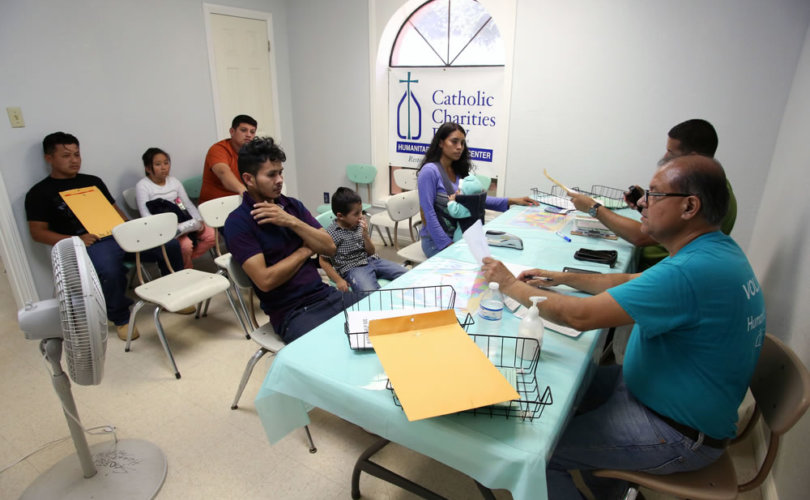 Mark Morgan, former commissioner for U.S. Customs and Border Patrol, attested in the video that Catholic Charities is one of multiple non-governmental organizations (NGOs) that are “actively facilitating the illegal movement of aliens into this country,” and that the U.S. government “is subsidizing what they’re doing on the backs of taxpayers — hundreds of millions of dollars.”

His claim was backed by the statements of at least a half-dozen commentators, including Heather Hobbs, spokesperson for John Birch Society. She said when she arrived at the U.S. southern border she “had various police officers, border agents, and many of them Catholic,” tell her to “stay away from Catholic Charities because they are encouraging the human trafficking and drug epidemic that we’re seeing.”

Investigative reporter Ben Bergquam was shown explaining to podcast host Stew Peters that criminal “cartels control the entire border,” and that “everyone that comes across that border has to pay them.”

“The human trafficking now is making them more money than the drugs make them,” he added.

Tom Horman, former director of U.S. Immigration and Customs Enforcement, shared some of the horrors that are part and parcel of cartel-managed illegal immigration: “People say why do you get so angry, why do you get so emotional? Because I’ve seen so much death on this border. I talked to a 12-year-old, she had over 22 samples of DNA in her.”

“These cartels are ruthless. Thirty percent of women get raped. Think about that,” Horman said.

Video clips showed journalist Owen Shroyer commenting on what he said were streams of illegal immigrants walking into Catholic Charities in the Rio Grande Valley. He also watched the transport of unidentified people from the Catholic Charities facility to a local airport.

Shroyer several times witnessed a woman who had a “Santa Muerte” tattoo on her calf transport people to the airport, once with babies. She reportedly said they were her kids, until the camera was rolling, upon which she insisted they weren’t her kids, and handed them off to other women with her.

The video compilation featured footage of conservative political commentator Michelle Malkin, who said she is Catholic herself, explaining that “what’s at stake” for Catholic bishops, who support Catholic Charities, including financially, “is billions of dollars of tax subsidies.”

“I pinpoint the U.S. Conference of Catholic Bishops as one of the largest profiteers in all of this … because the refugee resettlement racket, for example, has poured billions of dollars into the coffers of the Catholic bishops and many of their sub organizations,” Malkin said.

To support her claim, the video featured a screenshot of information posted by Tracking Accountability in Government Grants System (TAGGS) showing that “Catholic organizations received more than $200 million in federal grants for ‘refugee resettlement’ in 2020 and 2021.”

Judicial Watch announced last week a lawsuit, filed together with CatholicVote Civic Action, to procure, via the Freedom of Information Act (FOIA), records of communication between the U.S. Department of Homeland Security (DHS) and the U.S. Department of Health and Human Services (HHS) “with Catholic organizations near the Texas border that were aiding illegal immigrants.”

Their FOIA requests include a request for “communications between the U.S. Customs and Border Patrol and the U.S. Conference of Catholic Bishops regarding Catholic Charities of the Rio Grande Valley (“CCRGV”).

Sister Norma Pimentel, executive director of CCRGV, reportedly acknowledged in a February 3 interview that “her charity is reimbursed with tax dollars to buy ‘very few’ plane and bus tickets for illegal immigrants to move throughout the United States.”