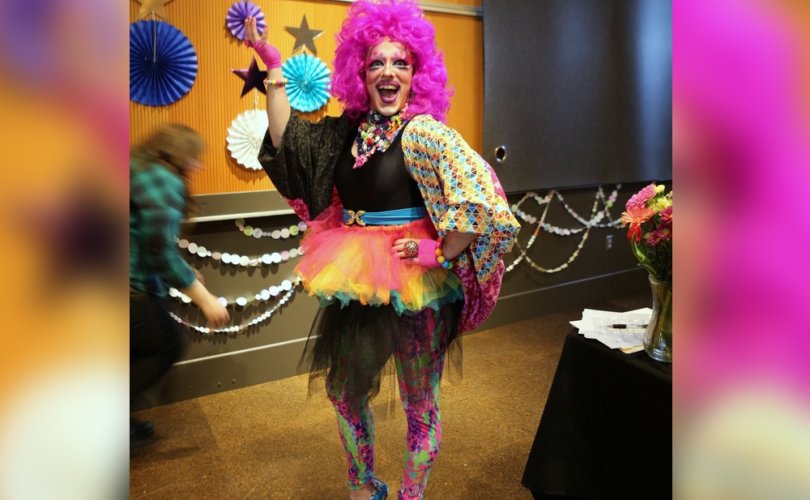 VANCOUVER, Washington, February 13, 2019 (LifeSiteNews) ― Neither snowy weather nor community concerns about an invited guest led to the cancellation a public library’s controversial LGBT children’s event over the weekend.

Local family policy activists, already dubious about the presentation of “gender fluidity” to children, were incensed to discover that the invited “drag queen” had been recorded performing a pornographic routine dressed as a children’s television character. On Saturday, a group of the activists came to the library to protest with signs, take photographs, and to watch the event itself.

One homemade sign read, “We love you, but not Drag Queen Story Hour.”

“Please think before you parent,” read another.

The activists reported that the majority of children who were brought to the event were aged three to seven. Many had come from as far away as Oregon. One activist, able to see the event by appearing with her 14-year-old son, noted on a private social media page made available to LifeSiteNews that there were several children and adults who were “gender non-conforming.”

She also noted that library staff played the LGBT anthem “I'm Coming Out” just before the event began.

Fully dressed, sporting a bright pink wig, and resembling a clown, Clare Apparently read three books to the children: Teddy's Favorite Toy, about a boy whose favorite toy is a Barbie-like doll, Every Day Dress Up, about a girl who eschews princess costumes to dress as feminist heroines, and Worm Loves Worm, about two identical worms who both wish to be the groom when they marry.

The witness said this was followed by a dance party and crafts sessions in which the children made crowns and rainbow colored ribbons.

She said she was most distressed by these last activities. When she and her son left, she turned around to see the group as whole and thought the event looked like a victory party, in which the adults had won and the children were the spoils.

She said she found this very disturbing.

“Over 1k views now,” he wrote on his public Facebook page, including a link to his “Ms. Frizzle” performance. “And a great new insult: ‘dirty filthy sexual pedophile pervert!’”