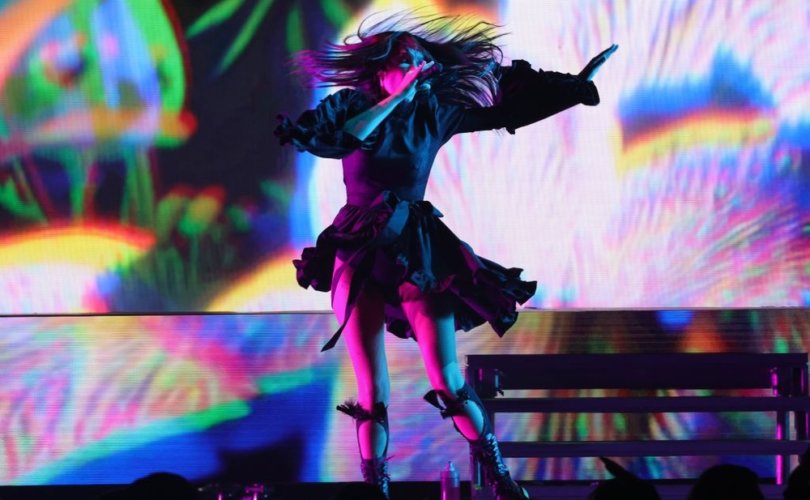 PHOENIX, Arizona (LifeSiteNews) — Arizona concert-goers reportedly walked out of the venue last weekend after pop singer Halsey launched into a pro-abortion tirade blasting the overturning of Roe v. Wade and insisting that her abortion “saved” her life, the Los Angeles Times reported.

During a concert on Sunday at the Ak-Chin Pavilion in Phoenix, the 27-year-old singer told fans her “heart breaks looking out into this audience, because there’s so many people … who deserve the right to health care” and the “right to choose themselves.”

“If you’re mad in this audience right now, and you’re sharing statistics on Instagram and infographics and saying … ‘That’s really f**ked up,’ what you should do instead is you should be sharing stories about how you’ve benefited from abortion somehow,” said Halsey, whose real name is Ashley Frangipane.

Halsey giving an obscene pro-abortion speech at her Arizona concert.

“What you should be doing is sharing stories about how you’ve benefited from abortion somehow”.

I’ll say it again…this is a wicked generation.pic.twitter.com/k3pDYVwOew

Halsey, the mother of a one-year-old child with boyfriend Alev Aydin, went on to tout her own prior abortion, which she claimed “saved” her life.

“Some of the people I’m looking at right now are going to need an abortion one day, and you deserve that,” she continued. “Whether it’s a life-threatening situation or it’s not, you deserve it. And here in Arizona, you guys gotta promise me that you’re gonna do that work so that the person to the left of you and to the right of you has that right for the rest of their lives.”

Halsey also led fans in a “my body my choice” chant.

Concluding her remarks, the singer went on the offense against audience-members who may not agree with her perspective.

“Perhaps noticing and addressing the concertgoers making their way toward exits,” the L.A. Times noted, Halsey told fans: “If you don’t like it, you can go home right now. I don’t care.”

The pop star added that “If you don’t like it, I don’t know why you came to a Halsey concert.”

It’s unclear how many people may have walked out of the venue amid the pro-abortion tirade.

One fan wrote in a January 26 tweet that it was “sickening” how many people “JUST WALKED OUT OF THE HALSEY CONCERT” after the singer began talking about abortion.

Halsey responded to the comment, joking that the “downside of doing outdoor venues” is that there was “no door to hit them on the way out.”

THE AMOUNT OF PEOPLE WHO JUST WALKED OUT OF THE HALSEY CONCERT AFTER NIGHTMARE WHEN SHE SPOKE ABOUT ABORTION WAS SICKENING. FIGHT FOR WHAT IS RIGHT. #AbortionRightsAreHumanRights #MYBODYMYCHOICE #halsey @halsey

Fox News reported that one Twitter user who claimed to have been at the concert said not all people who left were offended by Halsey’s rant.

“I waited the whole show for her to preform [sic] that (song) and give her speech and left after because I have a five hour drive home and wanted to beat traffic leaving the venue,” the user wrote, according to Fox. “Not everyone left because of what she said. It was my favorite part of the show lol.”

However, the outlet quoted another Twitter user who said fans don’t attend concerts to “get lectured on political or social issues … ”

“People attend concerts to enjoy the performers’ music, not unexpectedly get lectured on political or social issues that clash with their beliefs,” the person wrote, according to Fox. “Just because other patrons disagree with you, this doesn’t make them bad people … This mindset is ultimately going to destroy us.”

Meanwhile, Halsey wasn’t the only pop star to decry the fact that legal protections will now be provided to the unborn.

Others unhappy about the decision included Olivia Rodrigo, who once gave a pro-COVID shot speech at the White House, along with Megan Thee Stallion, Phoebe Bridgers, Billie Eilish, and Green Day’s Billie Joe Armstrong, the outlet reported.