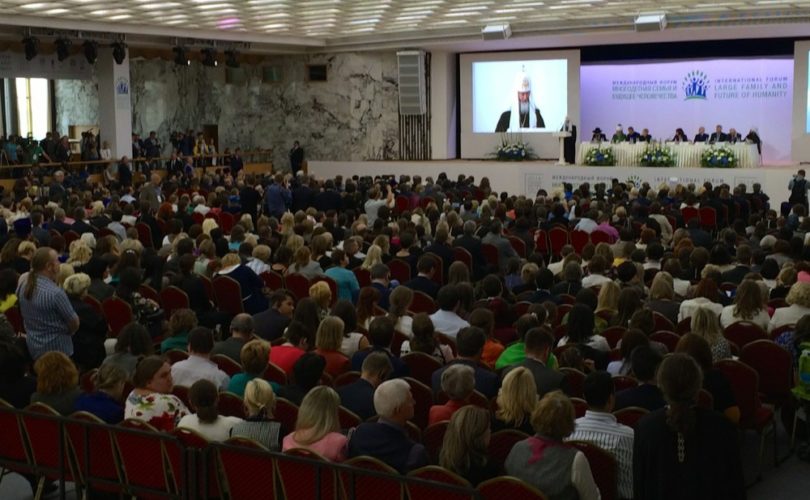 Pro-family leaders gather in Moscow September 10, 2014 at the International Forum 'Large family and the future of humanity'.John-Henry Westen / LifeSiteNews

MOSCOW — Imagine a land where life, family, faith, and culture are promoted by the official government. Where large families are treated, not as a blight on the planet, but indeed as the ‘future of humanity.’

Such is the case at the International Forum ‘Large family and the future of humanity’ conference, taking place this week in the Russian capital of Moscow.

The opening of the forum, with over 1,000 delegates from all over the world including over 200 from the West, took place this morning in the State Kremlin Palace with a Festival of Large Families.

Put on by the St. Andrew the First-Called and the St. Basil the Great Foundations, the conference is sanctioned and supported by the federal government and many of the presenters are being housed at the exclusive President Hotel that is reserved for official state business.

The forum program’s opening statement is a three-page declaration of life, family, and faith that would be the envy of any organization promoting life and family and is outstanding for its courage and forthrightness.

“Our world is going through an epoch of instability and social crisis closely inter-related with the global transformations in all key spheres of human development and civilization,” it begins.

“The significant magnitude of the current global instability is caused by the ‘sensate culture’ and a modern day dimension in world history, the destruction of moral standards such as Goodness, Truth, and Beauty and destruction of faith in a Created natural order that distinguishes good from evil.”

The speaker’s list reads as a Who’s Who of the pro-life and family movements around the world but also of the Russian federal government and Orthodox Church leadership, including an opening address by Patriarch of Moscow and All Russia Kirill himself.

The Vice-Speaker of the State Duma, the Minister of Culture, and the Chair of the Committee on Science, Education, and Culture are among the government representatives presenting.

The international character of the forum is easily seen by the presenters from every corner of the globe including Nigeria, the Philippines, Greece, Italy, Hungary, Canada, France, the United States, China, Ireland, Great Britain, Iran, Belgium, Spain, Norway, Argentina, and many more.

This first day of the forum will conclude with awards to Russian journalists who have promoted the family – the traditional family open to life, and to faith.