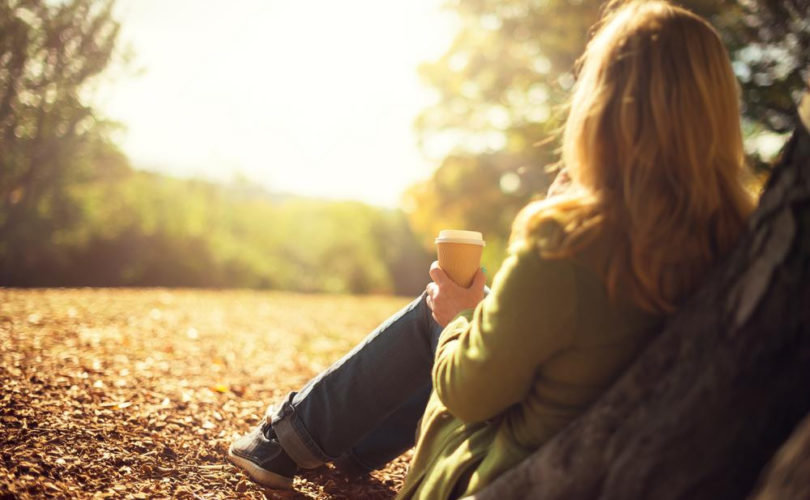 (Catholicsistas.com) – One of the most controversial teachings of Catholicism is its teaching on homosexuality. According to the Catechism of the Catholic Church:

Basing itself on Sacred Scripture, which presents homosexual acts as acts of grave depravity, tradition has always declared that “homosexual acts are intrinsically disordered.” They are contrary to the natural law. They close the sexual act to the gift of life. They do not proceed from a genuine affective and sexual complementarity. Under no circumstances can they be approved. (2357)

For most of us, this teaching is challenging, especially if someone we love is gay or lesbian. But what if you are the Catholic struggling with these desires? Is it possible to be faithful to the Church’s teachings and still be happy?

I am a 37-year-old Catholic woman who has been happily married for nearly 15 years. We have five children that I homeschool. I also struggle daily with same-sex attraction.

Most gays and lesbians will tell you they “knew” they were homosexual from a young age. I didn’t. I had the usual crushes on boys growing up and like most heterosexual women, envisoned myself getting married and having children with a great man.

Then I met Nora. Nora lived in my freshman dorm and we had several classes together, so we began spending a lot of time together. My boyfriend encouraged the friendship because it gave me a buddy when he was working. Nora and I had many of the same interests and were quickly “BFFs.”

One day a few months later, however, a startling thought crossed my mind: “I’m in love with Nora.” It frightened me badly to have that thought. I cried for hours, trying to figure a way out of the conundrum of being in love with a woman. It was all there, just as it had been with men: the emotional and yes, even the physical attraction.

I avoided Nora, but she insisted on knowing what was wrong. I finally told her how I felt, almost hoping she’d recoil in horror. Instead, she confessed she felt the same about me. And no, neither of us had ever been attracted to a woman before.

I know some of you may be thinking, “What do you mean, you just ‘woke up’ one day and fell in love with a woman? Can that really happen??” Not really. There were many factors in both our pasts that made us vulnerable to same-sex attraction. Nora had been repeatedly molested by a male cousin as a child. I was abandoned by my birth mother and grew up being physically abused by my mentally-ill adoptive mother. For Nora, I was safe. For me, Nora offered the nurturing bond with a female I’d never had. Neither of us had had any guidance about sexuality other than “don’t get pregnant.” Nor did we have any faith in God, which made it easier to ignore our consciences when tempted to become involved.

That summer, we began what turned out to be a three-year affair. Nora and I chose to be roommates for my remaining two years of college. Bizarrely enough, we periodically dated men while together. In the days before same-sex “marriage” and Cat Cora’s embryo exchanges, neither of us could imagine giving up our dream of a “real” family. I realize now that despite our attraction to one another, God’s call to union through marriage was still written on our hearts. We cared deeply for one another, but we still wanted the fairy tale wedding, the marriage, the children, the white picket fence. And in our mind, none of that was possible as a lesbian couple.

Perhaps that’s why we went to great pains to hide our relationship from friends and family. Though we couldn’t imagine life without one another, we couldn’t imagine a future together, either. We both felt an enormous sense of shame about our behavior, though most of our friends were liberal and would never have judged us. Half our friends were even gay or lesbian themselves. Yet we instinctively protected our images as heterosexual women.

A few months before graduation, I met a young man whose brilliant mind and sense of humor ended my relationship with Nora. Though I didn’t marry him, he nonetheless offered me the sense of normalcy I’d craved since becoming involved with a woman. Nora didn’t take it well and decided to come out as a lesbian to her family. She exposed our secret to anyone who would listen. Her family, which had warmly welcomed me into their home for three years, completely shunned me. In their eyes, I had corrupted their daughter and was a sexual deviant.

I never dated another woman after Nora, mostly because I never met another to whom I felt such a strong emotional attraction. The sexual attraction to women, however, never went away. I discovered that while I was still attracted to individual men, I was primarily attracted to women as a whole both sexually and emotionally.

Two years later, I met my husband, a man I felt all those things for and more. I went into marriage happy I’d finally achieved a “normal” life. Yet even then, same-sex attraction insidiously inserted itself. When I traveled out of town for work, I struggled not to go to lesbian bars. But I had promised fidelity and I had to honor that. I somehow knew if I cheated on my husband, I would be truly lost as a person. I thank God every day for helping me fight down those temptations.

Then we became Catholic. If our vows were sacred before, now they were sacramental. And while I was obedient to the Church, I did not fully understand its teachings on sexuality until I studied the “theology of the body” by John Paul II. Finally, I understood my body’s purpose and why marriage was so sacred. I understood why I’d never been satisfied with Nora and why I’d yearned to unite myself to a man and have a family.

But understanding my sexuality did not make the temptations go away. I could not just turn off the habit of being sexually aroused by women. For a while, I convinced myself that as long as I wasn’t actually engaging in homosexual acts, I wasn’t sinning (i.e., fantasy is okay). The more I understood authentic chastity, however, the flimsier this excluse became. Am I “pure of heart” when indulging in sinful fantasies during the most intimate act of my marriage? How is imagining another person during that time respectful to my beloved? I knew that real chastity required something more than simply following the letter of the law; it required a conversion of heart.

I am happy to say that the battle today is easier than in the early years of marriage. I remain faithful to God and my husband because I work hard to avoid near occasions of sin. For instance, I avoid deeply emotional friendships with women that eclipse the one with my husband. I don’t watch gay- and lesbian-themed movies. I also have trained my imagination to avoid impure fantasies. It can be tempting to fall into old thought patterns, especially if I’m tired. But if necessary, I’ll shut down physically and emotionally to avoid offending God. No fleeting sensual pleasure is worth offending Jesus, who suffered so much to save me.

It helps, too, to know that what I have with my husband trumps anything I could have had in a homosexual relationship. The most amazing quality of our union is God’s gift of cooperating with him in creating a unique person who possesses an immortal soul. It’s a transcendent, awesome spiritual privilege I would have missed as a lesbian.

Naturally, I have profound compassion for those who struggle as I do. But I don’t believe we must indulge same-sex attraction if we experience it. I’m really no different than a straight man who struggles not to objectify women. Or a straight woman who is tempted to fornicate. We’re all broken people, which is why we all need Christ.

I’m not capable of re-ordering my broken sexuality, but as I’ve witnessed in the past decade, it can be reordered with grace and trust in Jesus. It just takes time and a desire to be healed. Sanctification, after all, is a lifelong process. I take comfort in the fact that slowly but surely, God is healing the wounds in my soul from the sexual sins that marred it.

Does God love His children who struggle with same-sex attraction? Yes, of course. But He loves us too much to leave us that way.

Read an exclusive interview with Dawn Wilde, author of “Confessions of a recovering lesbian,” here.

This testimony originally appeared at Catholicsistas.com and is reprinted with permission of the author.