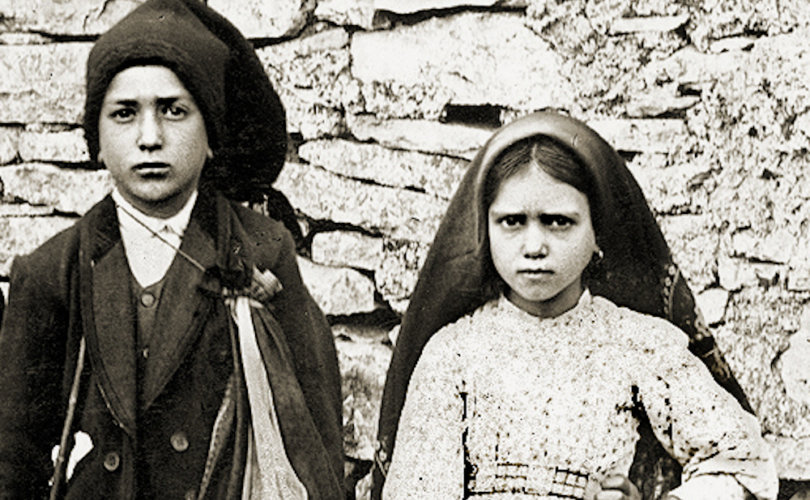 VATICAN CITY, April 20, 2017 (LifeSiteNews) – Pope Francis will canonize Blessed Jacinta Marto and Blessed Francisco Marto, the two siblings who witnessed the Virgin Mary’s appearances at Fatima, during his upcoming visit to the site of the apparitions on May 13.

The pope convened all of the resident cardinals of Rome on Thursday to officially establish the canonization date for more than three dozen new saints, according to Rome Reports, including two of the three child seers of Fatima.

Cardinal Angelo Amato, Prefect of the Congregation for the Causes of Saints, recounted some aspects of the Fatima siblings’ lives for the gathering.

“They attended little school, and they were practically illiterate,” he said. “They learned the catechism at home, along with their cousin Lucia.”

Pope Francis announced the date of the canonization in Latin, as prescribed by ecclesiastical tradition.

Pope Francis is scheduled to travel to the Fatima shrine in Portugal on May 12-13 for the centenary celebration of the 1917 apparitions of Our Lady.

The April 20 announcement took place in the course of an Ordinary Public Consistory, a meeting of the pope, cardinals and promoters of sainthood causes that formally concludes the sainthood process.

A year after the Fatima apparitions, both Marto siblings became ill during a European flu epidemic. Francisco died April 4, 1919, at age 10, and Jacinta died almost a year later on February 20, 1920, at age 9.

Francisco and Jacinta’s cousin, Lucia Santos, became a Carmelite nun and passed away in 2005 at age 97. The diocesan phase of her sainthood cause concluded in February and has advanced to the Vatican for study.

The pope also announced at Thursday’s consistory that he would canonize 34 others on October 15.

The 30 martyrs of Natal, Brazil, including Jesuit Father Andre Soveral; diocesan Father Ambrosio Francisco Ferro; and layman Mateus Moreira, along with 27 others murdered in 1645 by Dutch soldiers;

The child martyrs of Tlaxcala, the first martyrs of Mexico, named Cristóbal, Antonio and Juan, who died in 1527 and 1529;

The Spanish Piarist Faustino Miguez, who founded the Daughters of the Divine Shepherd Institute in 1855, a school for girls;