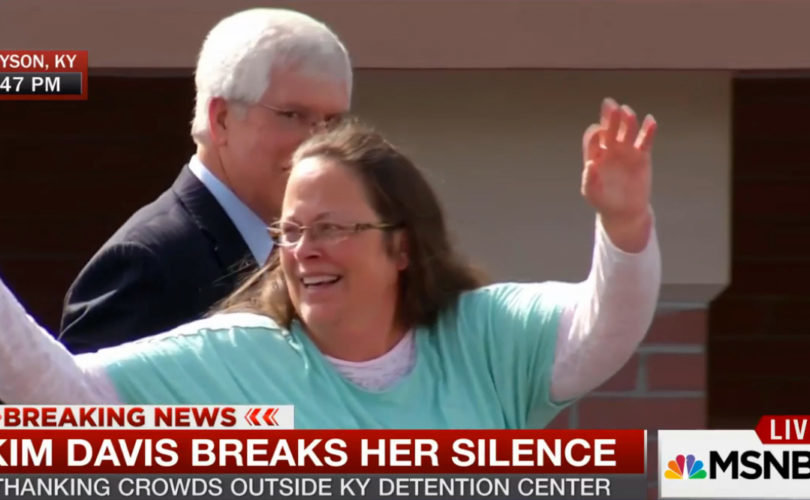 ROWAN COUNTY, Kentucky, September 11, 2015 (LifeSiteNews) – At least one of Rowan County, KY clerk Kim Davis's employees is vowing to defy her if she directs him to refuse marriage licenses to any couples after her return to work on Monday, further escalating the stakes in the high-profile religious liberty case.

Some of Davis's supporters said on Wednesday that any of her deputies who issue the documents without her permission should be fired, Reuters reported.

“Fire the cowardly clerks that are lawbreakers,” read a sign waved in the office by Davis supporter Ante Pavkovic, a North Carolina man who has been part of organizing support for Davis.

Pavkovic lobbied the clerks to uphold their oath of office, criticizing the judge who jailed Davis and the Supreme Court justices for the Obergefell v. Hodges decision legalizing homosexual “marriage” nationally.

“Do not join them in this any further, and if you can't do that, then you should just quit,” he said.

Pavkovic was asked by a deputy sheriff to leave the clerk's office.

Davis plans to return to her job on Monday after spending time with her family, according to her attorney's spokesman.

U.S. District Judge David Bunning ordered Davis released from jail Tuesday after finding her in contempt of court the week before for refusing to issue marriages licenses.

Davis declined to issue the licenses, whether to same-sex or opposite-sex couples, objecting on religious grounds to lending her name to the documents for same-sex “marriages.”

She is requesting an accommodation to have her name removed from the licenses.

Davis spent six days in jail and was released with a warning from Bunning not to “interfere” with her deputy clerks, who are issuing the licenses under threat of further legal sanctions.

Davis's lawyer, Liberty Counsel's Mat Staver, stated on Tuesday after her release that Davis's position had not changed, and she would not violate her conscience, prompting the question of whether she would be arrested again should she move to block the issuance of licenses.

Liberty Counsel Attorney Harry Mihet did not say on Wednesday whether Davis would fire the deputies or take any other action if they continued to issue licenses.

Davis loves her deputies, he said, and added that they were forced by judicial threats to issue the licenses, emphasizing that Davis was looking for a remedy that did not violate the law or the deputies' consciences.

Bunning got assurances from five of the six deputy clerks that they would comply with the court order and issue licenses to all legally eligible couples, the Reuters report said, with only Davis's son Nathan refusing.

Neither Davis's son nor two other Kentucky county clerks have been jailed for refusing to issue marriage licenses.

As of Wednesday, the first of seven same-sex couples to attain marriage licenses since last Friday returned to the Rowan County clerk's office to legally file the documents, with 10 licenses in all having been issued.

Mason's pledge to defy Davis could signal further controversy in the contentious case in light of Bunning's order for Davis not to interfere with the issuing of marriage licenses, something recognized by Nashia Fife, of the Rowan County Rights Coalition, which supports homosexual “marriage.”

“The ante has been upped at this point,” Fife said.