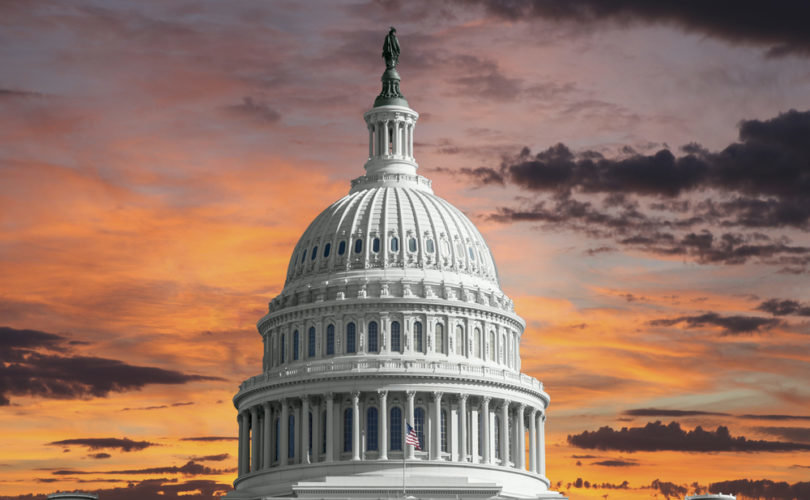 The House of Representatives narrowly approved the bill in a 228-206 vote Friday after a months-long delay due to infighting among Democrats. Biden is expected to sign the IIJA as early as next week.

Conservative lawmakers have slammed the so-called infrastructure bill for earmarking hundreds of billions of dollars for left-wing climate projects, including billions for electric school buses, as well as for “woke” additions, like “gender identity” language and race-based funding programs.

Now gender identity is infrastructure. Can’t wait to see what else is in this bill pic.twitter.com/OxDzIED2K3

One section of the bill declares “gender identity” and “sexual orientation” federally-protected classes, like race or disability, stating that:

The provision “would severely undermine religious freedom in America, and tacitly affirm the pernicious, false message that the sexual morality historically taught by Judaism, Christianity, and Islam is bigoted and akin to racism,” the Religious Freedom Institute warned. “Rural faith-based colleges and universities, small faith-based businesses, and religious hospitals and medical clinics, sometimes providing the only healthcare services for miles, could be forced to violate their religious conscience or be denied participation in the program.”

“With this legislation, the proverbial camel is in the tent,” American Family Association general counsel Abraham Hamilton noted. “The LGBT agenda will only be limited to the wildest imagination of the most liberal judge.”

Republicans were nevertheless crucial for the infrastructure bill’s passage. Thirteen GOP congressmen voted for the bill, getting it over the line despite defections from six hard-left Democrats of “the Squad,” which includes Reps. Ilhan Omar, Cori Bush, and Alexandria Ocasio-Cortez.

Those Republicans’ support for what Biden has already begun touting as one of his signature domestic policy achievements drew sharp backlash from fellow members of their party. “It was very surprising to me to see 13 Republicans basically bail Nancy Pelosi out,” Sen. Bill Hagerty of Tennessee commented. “She did not have the votes within her own party to do this. We had 13 Republicans that decided to step up and help her in this way.”

“I think what they did was put themselves on a path to early retirement,” he said.

"That 13 House Republicans provided the votes needed to pass this is absurd."

The Senate had passed the legislation in August, also with support from Republicans. Nineteen GOP senators, including Senate Minority Leader Sen. Mitch McConnell of Kentucky and four senators up for re-election next year, voted with all Democrats to pass the bill out of the upper chamber.

The IIJA is unlikely to boost the economy in any significant way, as both Republican backers and the Biden administration have claimed. Analysis from the University of Pennsylvania Penn Wharton Budget Model (PWBM) earlier this year reported that it would “have no significant effect on GDP or productivity.” At the same time, the Congressional Budget Office (CBO) has predicted that the bill will add more than $340 billion to the federal deficit over the next decade.

Passage of the infrastructure bill Friday was seen as a move to shore up Biden, whose poll numbers have plummeted to just 38 percent, according to a recent USA Today poll, amid record-level inflation, supply chain and border crises, and the universally-panned Afghanistan withdrawal this summer.

Friday’s vote also came on the heels of Democrats’ disastrous election losses last week. Republicans defied expectations Tuesday to win all statewide elections in Virginia, including the governor’s seat, and retake control of the Virginia House. The GOP had not won statewide in Virginia since 2009.

The historically strong showing for Republicans also included a near-victory against New Jersey Gov. Phil Murphy, the ousting of New Jersey’s top Democratic lawmaker, and a sweep of judicial elections in Pennsylvania. Republicans even made inroads in far-left bastions, winning the Seattle city attorney’s race and picking up seats in New York City.

The Democratic establishment has pinned blame for the losses in large part on the party’s radical progressive faction, which successfully lobbied Biden not to press for a standalone vote on the IIJA two weeks ago.

The passage of the infrastructure bill represents a major reversal for House progressives, who for months vowed not to support it without immediate passage of a larger, even more radical $1.75 trillion reconciliation package, the Build Back Better Act (BBB).

House Democrats’ progressive caucus additionally agreed last month to cut the second bill down from $3.5 trillion, ceding various left-wing priorities like paid family leave and free community college, though watchdogs have warned that the infrastructure and reconciliation bills may cost trillions more than their official price tags due to budget gimmicks.

Speaker of the House Nancy Pelosi scrapped a vote on the BBB initially planned for Friday after a group of five “moderate” Democrats said they would not get behind the bill until later this month, or before receiving a cost estimate from the Congressional Budget Office (CBO).

The House instead took a procedural vote to take the reconciliation bill up by the week of November 15. Biden has pledged to get it passed through the chamber by Thanksgiving.

Even if approved by the House, the BBB faces tough odds in the Senate, where at least two Democrats, Sens. Joe Manchin of West Virginia and Kyrsten Sinema of Arizona, have not said they will back the bill in its current form. Democrats need the support of their entire caucus to pass the bill in the evenly-divided Senate.