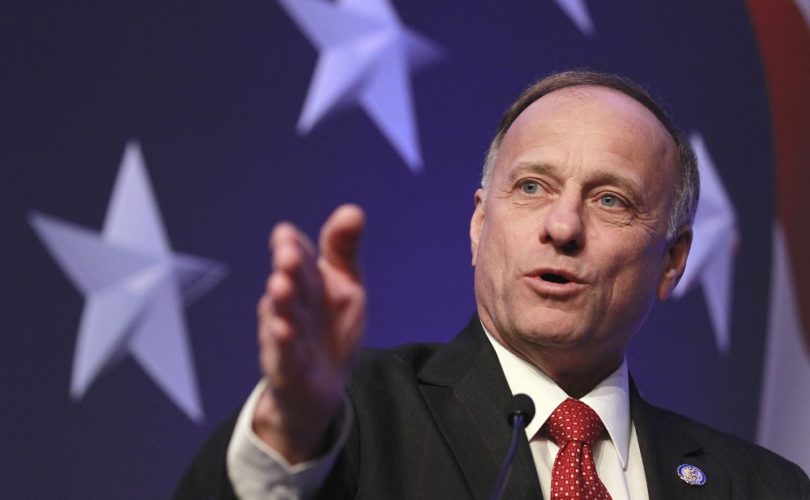 WASHINGTON, D.C., November 1, 2017 (LifeSiteNews) – A U.S. House committee is holding a hearing today on a bill to stop abortions on babies with detectable heartbeats.

Co-sponsored by 169 Representatives, it has more than enough support to pass the U.S. House if it's brought to the floor. Rep. Steve King, R-Iowa, introduced the bill, HR 490. It’s called the Heartbeat Protection Act of 2017.

Only one Democrat, Minnesota's Rep. Collin Peterson, is a co-sponsor.

The Heartbeat Protection Act is “the best news the pro-life community has never heard of,” Janet Porter of Faith 2 Action told LifeSiteNews. Porter is the bill’s architect. She will be present during today’s hearing by the House Judiciary Committee’s Subcommittee on the Constitution and Civil Justice.

“To deny the unborn child’s heartbeat is to deny science,” said Porter. “To ignore it is heartless.”

The hearts of humans in the womb begin to beat at 21 days. Parents usually hear their babies’ heartbeats around six or eight weeks.

“One of our most fundamental obligations as lawmakers is to protect human life,” said Rep. Bob Goodlatte, R-Virginia. “The proposed bill, the Heartbeat Protection Act, defends life from one of the earliest moments it can be detected — as soon as a doctor can find a child’s heartbeat. Each beating heart represents a unique human being with dignity and rights that deserves to be protected from the dangers of abortion.”

“Since Roe v. Wade was unconstitutionally decided in 1973, nearly 60 million innocent babies' lives have been ended by the abortion industry, all with a rubber stamp by the federal government,” said King.

King said he is committed to protecting “the lives of voiceless innocents” and welcomes “this opportunity to have my legislation given in-depth consideration by Congress and to bring attention to the importance of preserving each of these precious lives.”

Although if the bill becomes law there would still be a very small “window” of several weeks during which very young babies could be aborted, the Heartbeat Protection Act “will protect nearly every child from being aborted.”

America is one of seven countries that allows abortion on demand throughout all nine months of pregnancy.

“Once we protect babies whose heartbeats are detected, then we can go back and get the rest,” said Porter.

But for now, “it’s a compromise bill. It’s a scientific solution upon which America can agree.”

“We’ve never been to a funeral of somebody with a beating heart,” noted Porter. If a person is dying on the ground, “the first thing you do is check for a pulse.”

Porter called the support the bill has received from Congressmen “overwhelming” and predicted the U.S. House and U.S. Senate will vote on it.

“If we can’t do this now, then who are we fooling?” she asked. “Who are we kidding about being pro-life?”

“It’s time that we actually make good on those pro-life promises that we’ve been hearing about from all these leaders, all these representatives, all these senators, for literally decades,” she said.

“This gives them an opportunity” to prove that they actually want to stop more than a tiny fraction of abortions, said Porter. “It gives an opportunity to do more than regulate abortion. We’re actually gonna end (abortion) for every child whose heartbeat can be heard.”

History of the bill

Heartbeat bills have been introduced in a handful of states but have been opposed by pro-abortion politicians and judges.

Arkansas and North Dakota passed heartbeat bills, but courts blocked them were from being implemented. The Supreme Court refused to hear an appeal, allowing the decisions of the lower court to remain in place.

The heartbeat bill passed the Ohio legislature in 2016. Gov. John Kasich, who self-identifies as “pro-life,” vetoed it.

This veto lay bare some of the divisions in the pro-life movement over whether the best way to overturn Roe v. Wade is with a 20-week abortion ban on pain-capable babies or with a bill like Porter’s. Ohio pro-life groups publicly fought about this. Kasich thanked Ohio Right to Life for supporting him.

The Supreme Court should weigh in on the Heartbeat Bill because a baby’s heartbeat is a more “consistent and certain marker than viability,” said Porter, which is the “arbitrary standard that the Court currently uses.”

“Every way you look at this bill, it’s good” and has the potential to prove to the Supreme Court the humanity of the babies in the womb and that they shouldn’t be aborted, said Porter.

“The very thing the Supreme Court’s looking for to allow us to protect children is what we’ve got in” the Heartbeat Protection Act, said Porter. “It’s great for children whose beating hearts are beating like an SOS signal.”

Another strength of the bill is its lack of exceptions for babies conceived in rape and incest.

That was “by design,” Porter told LifeSiteNews.

“We don’t want to exclude them,” she said. Now, keep in mind, the bill doesn’t protect every child. It’s every child whose heartbeat can be detected.”

“You can still have an abortion for any reason – rape, incest, or any other reason – prior to a detectable heartbeat,” she continued. “But that heartbeat is heard earlier and earlier as technology gets better and better.”

That the U.S. House is even holding a hearing on the bill has caused abortion supporters to panic. It’s also made it difficult for them to explain why they support ending the heartbeats of babies in utero.

Pro-abortion groups have tried to focus their messaging on how many women don’t know they’re pregnant during the first few weeks of pregnancy. By the time they seek abortions, their babies’ hearts have begun to beat.

An October 27 email blast from the Center for American Progress put the word “heartbeat” in scare quotes, as if to suggest a fetal heartbeat is not really a heartbeat. The bill is “not based in scientific fact,” the left-wing group claimed, despite the wealth of evidence available in embryology textbooks and the experiences of countless new parents hearing heartbeats at their first or second OB/GYN appointment during pregnancy.

The abortion lobby is going “ballistic,” observed Porter. They are going to have to acknowledge that “this fellow human being in the womb has a detectable heartbeat.”

Pro-abortion activist Priscilla Smith is testifying on behalf of the Committee’s minority. Smith is a law lecturer at Yale University.

She is a Senior Fellow at Yale’s Program for the Study of Reproductive Justice. Smith worked for the Center for Reproductive Rights for 13 years and litigated for the pro-abortion side in Carhart v. Gonzales, the Supreme Court case over partial-birth abortion.

In 2008, Smith authored a paper titled in the Brooklyn Law Review titled Responsibility for Life: How Abortion Serves Women’s Interest in Motherhood. She testified before the House Judiciary Committee in 2015 in defense of Planned Parenthood, when it was being investigated in its infamous baby body parts harvesting scandal.

Cleveland State University Professor David F. Forte, a former consultor to the Pontifical Council for the Family and former scholar at the Heritage Foundation, will testify. So will Dr. Kathi Aultman, now a Fellow with the American College of Obstetricians and Gynecologists. Aultman is a former abortionist who is now pro-life.