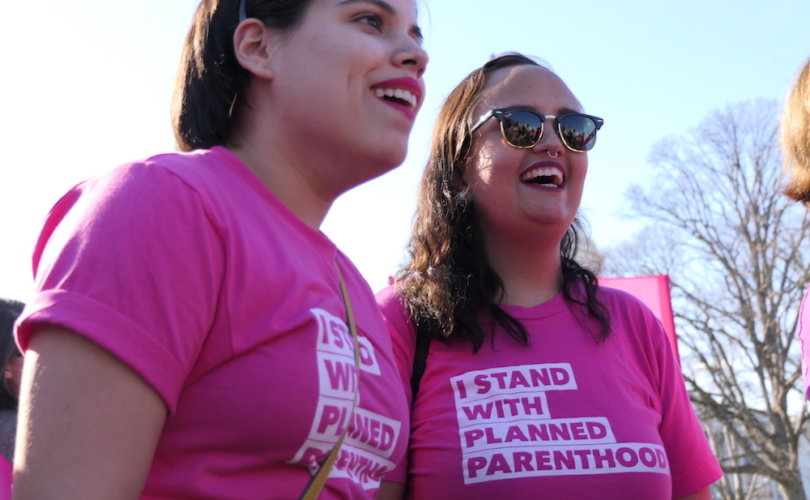 WASHINGTON, D.C., May 1, 2017 (LifeSiteNews) – Republicans and Democrats in Congress agreed on an omnibus budget deal that funds Planned Parenthood through September and will likely vote on it this week. By reaching a deal, they prevented a temporary government shutdown.

The bill increases funding for abstinence education programs but continues to gives far more money to some “comprehensive” sex-ed programs.

“It’s beyond frustrating that Congress is poised to pass a government funding bill that continues to fund Planned Parenthood, the nation’s largest abortion vendor and the subject of over a dozen criminal referrals from committees in both the House and Senate,” said Kristan Hawkins, president of Students for Life of America. “The Republican Party is the only party with an anti-abortion platform and whose candidates ran specifically on the promise to defund Planned Parenthood, yet, here we are, watching them pass a bill that funds Planned Parenthood even though they control the House, Senate, and White House.”

“With pro-life Republican majorities in both houses, it is incredibly disappointing that any Republican spending bill would contain continued funding for Planned Parenthood,” said Marjorie Dannenfelser, president of the Susan B. Anthony List. “This makes it imperative that Republicans also move quickly on a reconciliation bill that redirects the abortion giant’s funding to community health centers.”

A reconciliation bill is another type of budget bill that only requires a simple majority to pass the Senate. The omnibus bill needs 60 Senate votes to pass.

Dannenfelser noted that the majority of Americans support redirecting funds from Planned Parenthood to comprehensive health clinics that don't commit or promote abortion.

“Women would be better served by these comprehensive healthcare entities, which outnumber the abortion chain by more than 20 to 1 nationwide,” she said. “Planned Parenthood, which performs more than 320,000 abortions in a single year per their latest annual report, does not need or deserve taxpayer dollars.”

In February, the House voted to overturn a last-minute Obama regulation forcing states to fund Planned Parenthood through Title X “family planning” grants. The Senate also voted to overturn it with the help of Vice President Pence breaking a tie. Trump then signed it.

“That effort to undo Obama’s parting gift to the big abortion industry proves that the votes are there using reconciliation,” said Dannenfelser.

The omnibus agreement “is a good agreement for the American people and takes the threat of a government shutdown off the table,” said pro-abortion Senate Minority Leader Chuck Schumer, D-NY. “The bill ensures taxpayer dollars aren’t used to fund an ineffective border wall, excludes poison-pill riders, and increases investments in programs that the middle-class relies on, like medical research, education and infrastructure.”

Riders are additions to a bill.

During this fight, Democrats “fended off riders they view as anti-environmental and anti-abortion,” Politico reported. The liberal website Daily Kos labeled the omnibus bill “an amazing win for Democrats.”

The one victory for social conservatives in the budget is the $15 million it allocates for sexual risk avoidance education, a $5 million increase from last fiscal year.

This money will “exclusively implement education in sexual risk avoidance (defined as voluntarily refraining from non-marital sexual activity),” it specifies.

“We are pleased that Congress increased SRAE [sexual risk avoidance education] funding by 50 percent in the FY 2017 omnibus spending bill, especially since there was no similar increase for the Teen Pregnancy Prevention program, a teen-sex-promotion program initiated under President Obama,” Valerie Huber, the president and CEO of Ascend, told LifeSiteNews. “Congress is on the right side of research and science with today’s sex education funding recommendation.”

“The CDC considers teen sex to be a youth risk behavior, so it makes sense that we give teens the skills to avoid that risk,” said Huber. “We applaud … Tom Cole in the House and Roy Blunt in the Senate for their leadership to put the health of youth at the forefront in this too-contentious debate over sex education. We are encouraged and hopeful that this increased funding for SRA education will continue.”

Hawkins warned that unless Congress passes a healthcare bill or reconciliation bill defunding Planned Parenthood, “it will be a betrayal that the GOP will find extensively difficult to overcome when they go back to pro-lifers with the same promises in the next campaign.”