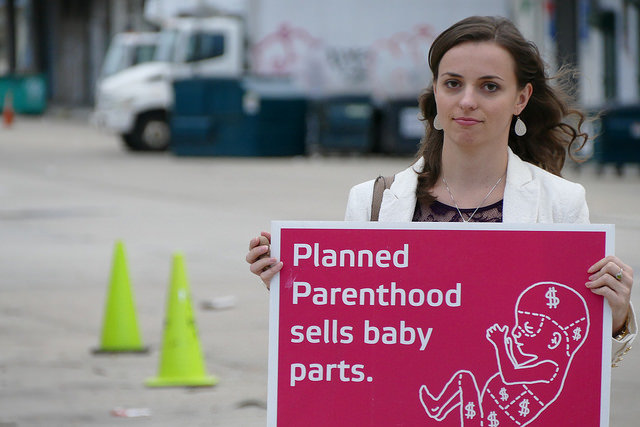 WASHINGTON, D.C., December 1, 2016 (LifeSiteNews) – The Select Investigative Panel on Infant Lives announced today that they have made nine criminal and regulatory referrals against Planned Parenthood, other abortion businesses, universities, and fetal tissue companies.

The House of Representatives is expected to vote today on whether the Select Panel will be funded through the rest of the year.

The Select Panel was created to investigate the fetal body parts trade in the wake of undercover videos from the Center for Medical Progress (CMP) showing Planned Parenthood profiting from aborted baby body parts.

“Rep. Marsha Blackburn has done an outstanding job chairing the Select Investigative Panel in the midst of vicious opposition from those involved with the Abortion Cartel,” said Troy Newman, President of Operation Rescue, who also served as a Founding Board Member for CMP. “The Select Panel’s investigation has been worth every dime of money it has spent pursuing the truth. It has caused the break-up of several illegal aborted baby tissue trafficking schemes and launched investigations around the country. We very much appreciate their work and continue to look forward to the final results of this investigation that is sure to provide even more criminal referrals for prosecution before its work concludes at the end of the year.”

“Law enforcement and elected representatives at all levels must now act quickly to bring Planned Parenthood to justice under the law and prevent any more taxpayer subsidies from flowing to Planned Parenthood’s barbaric criminal enterprise,” David Daleiden, CMP founder and project lead, wrote in reaction to the referrals.

Daleiden noted, “The Select Panel is the only official, comprehensive, nationwide investigation of Planned Parenthood’s harvesting and sale of aborted fetal organs, and their findings confirm the criminal activity at Planned Parenthood that CMP’s videos documented and show that the wrongdoing goes even deeper than anyone first suspected.”

The Select Panel's full list of criminal and regulatory referrals is below:

1. The University of New Mexico was found to have violated their state’s Anatomical Gift Act by receiving tissue from a late-term abortion facility, Southwestern Women’s Options in Albuquerque, NM. The matter was referred to the New Mexico Attorney General for further investigation and prosecution.

2. After conducting a forensic analysis of the limited financial data submitted by StemExpress, the Select Panel found that it was violating federal law by profiting from the sale of aborted baby remains. Referrals were sent to the El Dorado, CA District Attorney and the U.S. Department of Justice.

3. The Panel’s investigation revealed that StemExpress and “certain abortion clinics” were violating patient privacy rights under HIPAA for financial gain. A referral was made to the U.S. Department of Health and Human Services.

4. It was discovered that an abortion facility in Arkansas violated the law by selling aborted baby remains to StemExpress for profit. A referral was made to the Arkansas District Attorney.

5. The Panel uncovered evidence that a university in Ohio was violating state law by trafficking in aborted baby remains. An oral referral was made to the Ohio Attorney General.

6. DV Biologics, a tissue procurement company, was found to have been illegally trafficking aborted baby remains for profit and had failed to collect California sales taxes. The Orange County District Attorney has sued and the Select Panel made a supplemental referral.

7. It was discovered that Planned Parenthood of Gulf Coast broke the law when it sold aborted baby remains for profit to the University of Texas. The Select Panel referred the case to the Texas Attorney General.

8. Advanced Bioscience Resources was found to have profited from the sale of aborted baby remains to “various universities.” A referral was made to the Riverside, CA District Attorney.

9. The Panel’s investigation discovered that Presidential Women’s Center in West Palm Beach, Florida, violated the federal and state law though their relationship with StemExpress, which allowed it to illegally profit from the sale of aborted baby remains. The matter was referred to the Florida Attorney General.