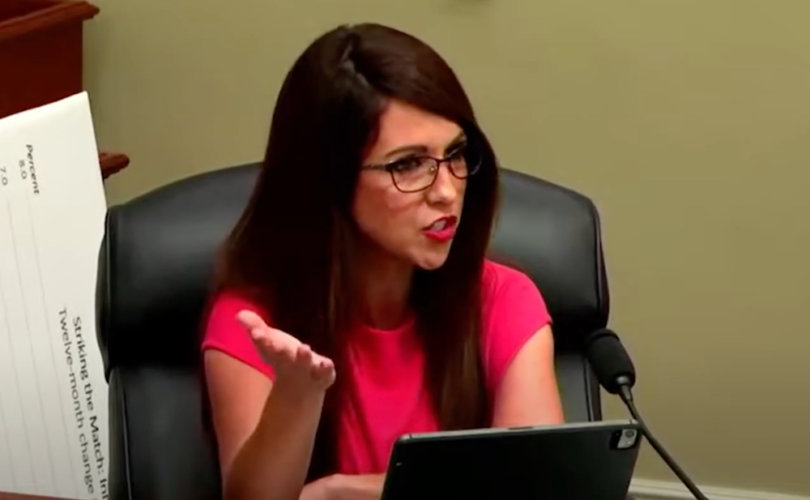 Colorado Congresswoman Lauren Boebert, who has reportedly signed the letter to the DHS and the FBIYouTube

WASHINGTON, D.C. (LifeSiteNews) – Congressional Republicans have renewed calls for further investigations into a pro-abortion group called Jane’s Revenge, which has taken credit for the firebombing of pro-life centers across the country, calling for the group to be classified as “domestic terrorists.”

Pro-abortion group Jane’s Revenge released a letter on June 14 that promised further violence and declared “open season” on pro-life centers. “From here forward, any anti-choice group who closes their doors, and stops operating will no longer be a target,” the pro-abortion group’s message stated. “But until you do, it’s open season, and we know where your operations are. The infrastructure of the enslavers will not survive.”

The Federal Bureau of Investigation (FBI) has begun investigating the attacks, according to the New York Post, after the spate of pro-abortion violence swept through the country.

“We are calling on the Department of Homeland Security and the Federal Bureau of Investigation to officially classify those committing crimes through Jane’s Revenge as domestic terrorists in response to their clear involvement in acts dangerous to human life,” the letter states.

These violent acts violate U.S. and State law, and the group itself has claimed intent to intimidate civilians and government officials. You must use the full extent of your powers under the law to fully prosecute these criminals and prevent further crime.

Congressman Mullin told The Daily Wire that such violence has “no place in our Republic” and criticized his colleagues across the aisle for continuing to remain silent on the attacks. It is now nearly two full months since Jane’s Revenge first carried out its attack against Wisconsin Family Action on Mother’s Day.

“It’s shameful the Left has proven so far unwilling to speak out against their own fringe narrative, especially if it means American lives are in danger,” Mullin told the Daily Wire. “It’s past time they quit with the complacency and investigate these members for exactly what they are: domestic terrorists. We are demanding immediate action to prevent this violence from occurring ever again.”

Speaker of the House Nancy Pelosi recently avoided condemning the violent attacks against pro-life centers when asked about it on June 17, instead doubling down on her support for abortion.

“Well, let me say this. A woman has a right to choose, to live up to her responsibility is up to her, her doctor, her husband, her significant other, and her God,” said Pelosi.

Pelosi is pressed on whether Democrat rhetoric is fueling attacks on crisis pregnancy centers.

She refuses to condemn attacks – and says “politicizing all of this is uniquely American.”

(That’s because the rest of the civilized world has more sensible abortion laws than ours.) pic.twitter.com/i0BCJnX4Zt

Leftists have also carried out potentially illegal protests, with the backing of the White House, outside of the homes of Supreme Court justices.

More recently, a California man tried to assassinate Supreme Court Justice Brett Kavanaugh on June 7, though law enforcement stopped him before he could carry out his attempt.