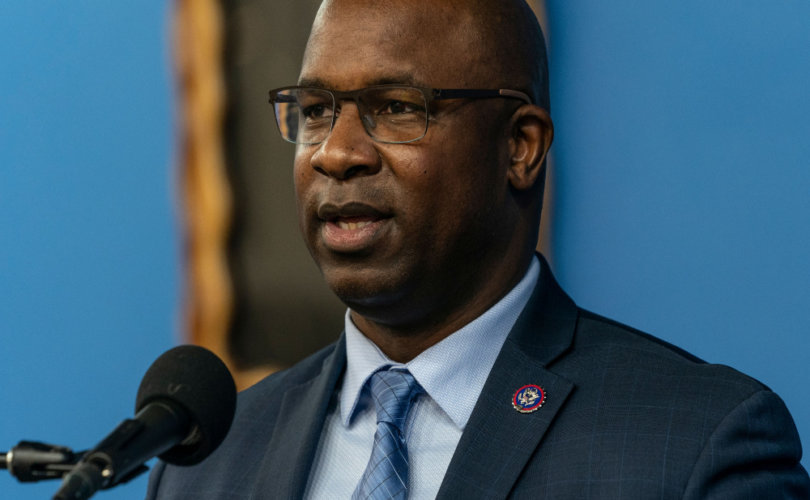 (LifeSiteNews) – A leftist congressman accused the U.S. Supreme Court of violating the constitution and called for an expansion of the Court in a series of tweets posted Tuesday.

“The Supreme Court is brazenly violating the Constitution, so it’s time to impeach those who have broken the law and expand the court,” Democrat U.S. Rep. Jamaal Bowman of New York tweeted.

In another tweet, Bowman said, “Instead of doing their job and upholding the Constitution and the rights of the people, SCOTUS decides cases based on their faith and their far-right extremism.”

“We all swore an oath of office when we became congresspeople, senators, justices, and presidents. It’s time we uphold our oaths of office by stopping the Supreme Court from participating in a judicial coup and attempting to expand their power,” another tweet read.

Tweeting about the overturn of Roe v. Wade, something that Bowman said marked a “dark day” in American history, Bowman said, “Nothing about overturning Roe v. Wade is pro-life when thousands will die due to lack of medical care.”

Leftists have been calling on President Joe Biden to take measures to ensure women access to abortions, such as allowing abortion camps on federal lands and expanding the Supreme Court. The White House has denied that it seeks to do either.

Last month, Press Secretary Karine Jean-Pierre said that allowing abortion camps on federal land in states that have outlawed abortion would have “dangerous ramifications” for abortion providers and for women seeking abortion. She also stated that Biden has no interest in expanding the Supreme Court.

The Supreme Court recently released a series of conservative rulings on several issues. It ruled against the Environmental Protection Agency’s (EPA) ability to regulate greenhouse gas emissions and in favor of a high school football coach who argued that he had a constitutional right to pray before games.

Last month, Bowman predicted that a Republican victory in the upcoming midterms would result in a civil war.

Speaking to MSNBC, Bowman stated that a Republican victory in the midterms would “embolden Republicans and the far-right and white nationalists across the country to begin to believe that it is their time to not just take power in the House but the Senate the White House and statehouses across the country.”

“And we’ve got to understand that this is a group that has been radicalized by the Great Replacement myth and many other things and have been pushing for violence and pushing for even civil war,” he continued. “So that is what’s at stake right now in terms of this election.”

Some have suggested that Bowman’s remarks indicated the Democrats were worried about defeat in November. Spencer Brown of Townhall reacted to Bowman’s remarks by tweeting “Rep. Jamaal Bowman — a member of The Squad — is now threatening that ‘civil war’ is ‘at stake’ if Republicans win control of Congress in the midterms. When this is Dems’ case to voters, it’s clear they have nothing to run on.”