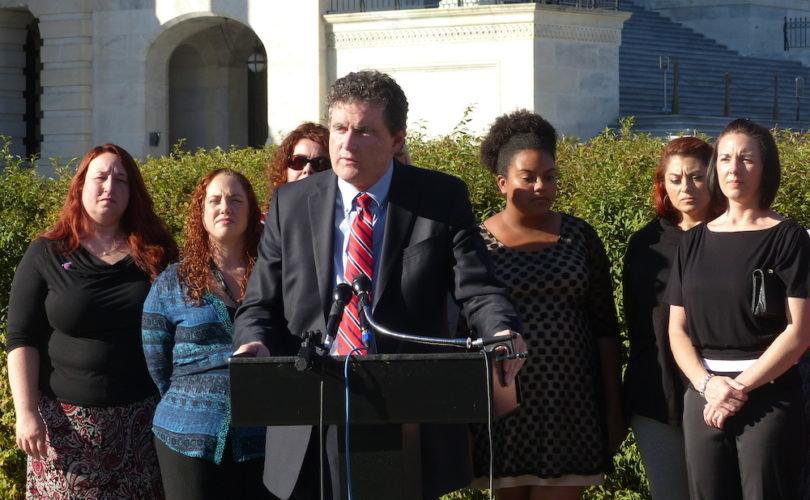 Essure has been blamed for the deaths of four women and harm – sometimes severe – to at least 5,000 others.

Speaking to LifeSiteNews moments after a press conference with women who have been harmed by Essure, Fitzpatrick said he wasn't concerned about the political ramifications of introducing an anti-contraception bill heading into a presidential election year.

“This is good for women, good for women's health, and we're protecting women,” he said. “This is a good bill. If I can have it brought to the floor of the House, it will be on the merits of the bill. It won't be on an agenda or anything.”

“I prefer the FDA to act on its own,” he continued. “I'm asking and will continue to ask the congressional committees to do their oversight. I believe the bill has merit, and on that basis, I'll ask that it be voted on.”

“The failures of Essure are well documented and wide-ranging,” Fitzpatrick told reporters at the press conference, flanked by a number of women who say they have been harmed by using Essure. “Yet, in the face of all these facts, this device remains on the market, certified with the FDA's stamp of approval. That's unacceptable to me and unacceptable to the tens of thousands of 'Essure sisters' who are living with this device's effects,” he said.

“If the FDA or manufacturer aren't willing to act in the best interest of these women, Congress must.”

Amanda Dykeman, administrator of the Essure Problems Facebook page, told LifeSiteNews after the press conference that the FDA needs to address the issues with Essure.

“We've seen things get recalled for 500 adverse event reports filed, and we have over 5,000. And I believe a recent number said around 8,000 or more. So we don't understand why the FDA isn't taking action.”

“This is a completely organic grassroots organization. We have women from all different backgrounds, religions, socioeconomic, everything,” said Amanda Rusmisell, who like Dykeman says she has been harmed by Essure. Rusmisell is the legislative liaison of the Essure Problems group.

“We're afraid” Fitzpatrick's bill might be held up because of politics, said Dykeman. However, “we want to stay as far away from that as possible.”

“It's not about politics for us. This is a device that was let on the market with flawed information, flawed studies, and it's harming women, period,” said Rusmisell.

The FDA approved Essure on November 4, 2002. Earlier this year, it expanded the list of descriptions about the device. In addition to listing its benefits, the FDA explained that there are serious long-term health dangers associated with Essure, among them ectopic pregnancies, unintended pregnancies resulting in severe complications and miscarriages, pelvic complications, pain, migration of the metal inserts through the fallopian tubes into the abdomen, puncture of the uterus, and many more, including death.