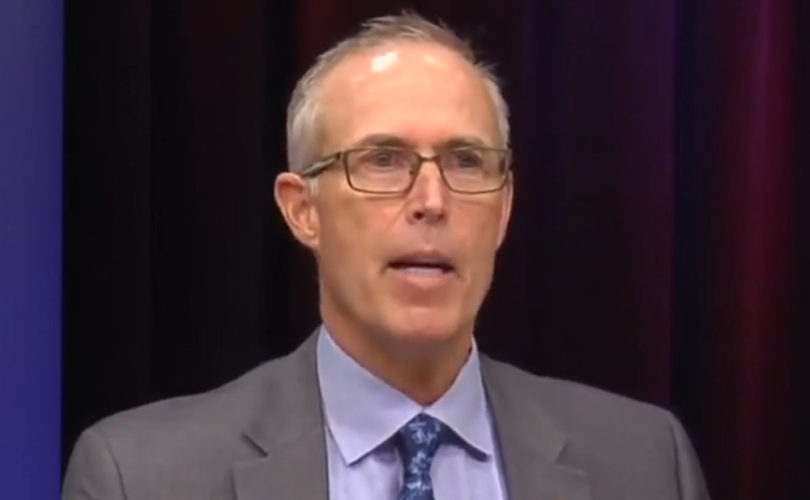 June 24, 2021 (LifeSiteNews) — A Democratic congressman from California suggested that the Catholic Church ought to lose its tax-exempt status if the U.S. Conference of Catholic Bishops (USCCB) decides to follow Church law and deny Communion to pro-abortion politicians like President Joe Biden.

In a June 18 tweet, Rep. Jared Huffman (D-CA) said, “If they’re going to politically weaponize religion by ‘rebuking’ Democrats who support women’s reproductive choice, then a ‘rebuke’ of their tax-exempt status may be in order.”

Huffman, who serves on a variety of caucuses — including the Lesbian, Gay, Bisexual, and Transgender (LGBT) Equality Caucus and the House Pro-Choice Caucus — raised eyebrows several weeks ago when he announced that attendees of this year’s first in-person townhall in his district would be required to show proof of vaccination while unvaccinated members would be relegated to attending online.

The congressman’s tweet threatening retaliation against the Catholic Church came in connection to a “Statement of Principles” put out on the same day by 60 “Catholic Democrats in Congress,” in response to the USCCB’s June 2021 meeting.

On June 18 the bishops announced that they had voted on a resolution to draft a document which will assess the “meaning of the Eucharist in the life of the Church.” The resolution passed with 168 in favor, 55 against, and 6 abstentions. The document is likely to be presented for discussion when the bishops reconvene in November.

The 60 self-proclaimed Catholic Democrat congressmen have expressed their dissatisfaction with the bishops, arguing that Communion should not be denied them despite holding views at odds with Church teaching.

The pro-abortion congressmen say they are “proud to be part of the living Catholic tradition” and claim they “work every day to advance respect for life and the dignity of every human being, adding that they are “committed to making real the basic principles that are at the heart of Catholic social teaching.”

The statement goes on to list a grab-bag of Democrat policy items which it calls “basic principles of Catholic social teaching” including addressing “racial and gender inequities.”

According to the statement, the signers support alternatives to abortion, “envision a world in which every child belongs to a loving family and agree with the Catholic Church about the value of human life,” but also believe in “the primacy of conscience.”

“In recognizing the Church's role in providing moral leadership, we acknowledge and accept the tension that comes with being in disagreement with the Church in some areas,” the statement reads.

The signers go on to argue that “[t]he Sacrament of Holy Communion is central to the life of practicing Catholics, and the weaponization of the Eucharist to Democratic lawmakers for their support of a woman’s safe and legal access to abortion is contradictory.”

The statement decries the fact that politicians are not denied Communion for supporting other policies which they claim are contrary to the Church teaching, including the death penalty and legislation aimed at stopping or reducing immigration.

Pope Francis had attempted to change the Church’s teaching on the death penalty by revising the Catechism of the Catholic Church in 2018. Prior to that, the Church has always held that the death penalty, as punishment for a crime of a certain magnitude, is in principle always permissible.

It is not clear why the Democrats argue that the Catholic Church support unregulated immigration, nor how questions of immigration compare to the killing of unborn children.

— Article continues below Petition —
PETITION: Support 2-year-old's right to remain on life support in UK
Show Petition Text
6477 have signed the petition.
Let's get to 7500!
Thank you for signing this petition!
Add your signature:
Show Petition Text

The congressmen go on to “solemnly urge” U.S. Catholic bishops not to “move forward and deny this most holy of all sacraments, the source and the summit of the whole work of the gospel over one issue.”

The “one issue” of abortion is a profound one for Catholics, because it is presupposed by all other rights.

As Pope Benedict XVI said in 2007 in an address in Vienna, “The fundamental human right, the presupposition of every other right, is the right to life itself. This is true of life from the moment of conception until its natural end. Abortion, consequently, cannot be a human right — it is the very opposite.”

According to Catholic teaching, politicians are morally bound to oppose any legislation which would legalize or promote the taking of an innocent human life.

A 2002 doctrinal note from the Congregation for the Doctrine of the Faith succinctly states that “those who are directly involved in lawmaking bodies have a grave and clear obligation to oppose any law that attacks human life. For them, as for every Catholic, it is impossible to promote such laws or to vote for them.”

Earlier this week Meghan McCain defended the Church’s stance on abortion, explaining, “All of these issues are life and death for Catholics, for devout Christians, and [President Biden is] going to have to ultimately talk to his Creator when the time comes as we all do, and reconcile his politics with his — with his personal faith.”

“I believe that he’s doing grave spiritual harm to himself and harm to this country,” McCain said.