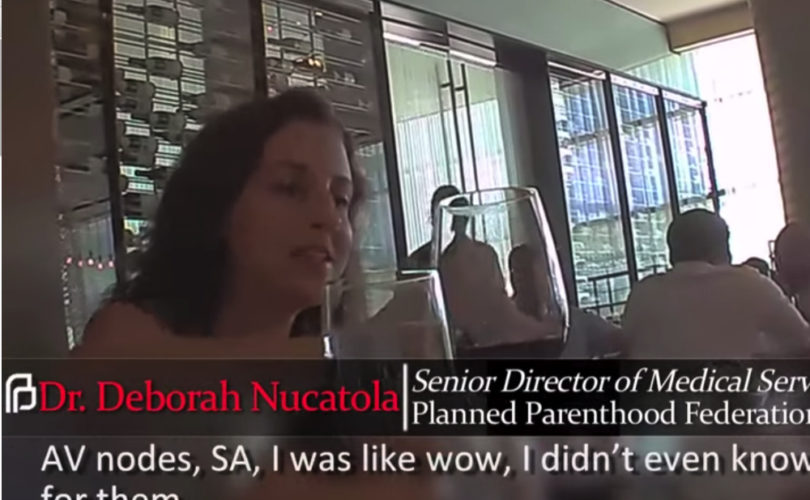 WASHINGTON, D.C., July 23, 2015 (LifeSiteNews) – Dr. Deborah Nucatola has become awfully shy since she became the first national Planned Parenthood figure featured in an exposé of its practice of harvesting, and allegedly profiting from the sale of, the organs of aborted children. Within hours of the video release by the Center for Medical Progress, she removed her social media accounts.

Now, she is considering dodging a call to testify before a Congressional committee investigating whether she admitted to breaking the law during her covertly recorded cameo with actors posing as agents of a human biologics company.

The House Energy and Commerce Committee called her to address the committee by month's end.

Roger K. Evans, Planned Parenthood's Senior Counsel for Law and Policy, responded by saying that asking her to speak to Congress “no later than July 31 … is short notice given the number of questions raised.”

He instead offered to substitute Dr. Raegan McDonald-Mosley in Nucatola's place.

Faced with the possibility that Planned Parenthood would refuse to send its star witness, at least one congressman has said he will take steps to ensure the abortion provider shows up.

Rep. Joe Pitts, R-PA, responded to Evans' letter by saying that the committee has called Dr. Nucatola to the witness stand before the end of the month, and she will comply or face the consequences.

“If they say no, we’ll subpoena her,” the pro-life Republican said.

The committee is focused on whether the process Dr. Nucatola – the doctor seen in the first video, eating salad and sipping wine – amounts to a violation of federal felony law forbidding the sale of human organs for “valuable consideration.”

The next footage may be a baby’s dissection, Planned Parenthood’s lawyer admits