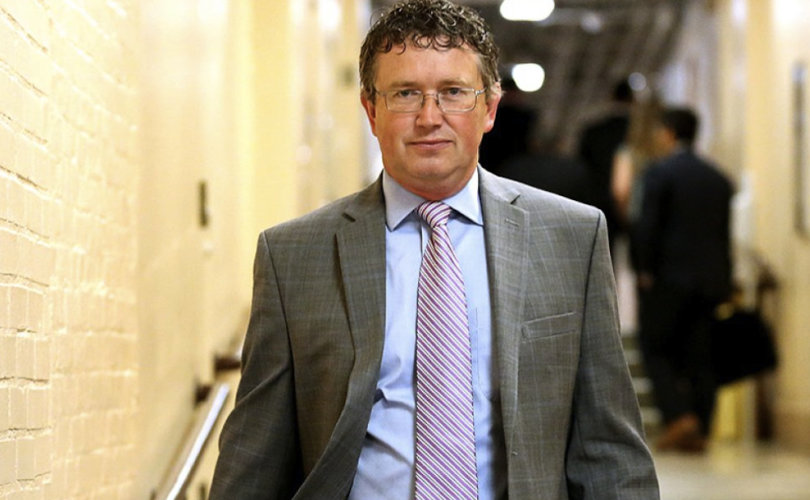 U.S. Rep. Thomas Massie is a Republican from Kentucky.

LOUISVILLE, Kentucky, January 22, 2019 (LifeSiteNews) – A Republican Congressman told LifeSiteNews that he believes leftist opponents of the March for Life may have devised a race-baiting narrative involving high school students to draw attention away from pro-lifers.

“I think the left was looking for a narrative to fill in the space so that the news wouldn’t report on the positive things that happened at the March.” Rep. Thomas Massie said Monday in an interview with LifeSite. “I felt that some elected official had to provide counter-narrative, and that’s what I did.”

Legacy and social media were ablaze after a video went viral over the weekend that showed a Native American man, Nathan Phillips, banging a drum while confronting smiling white teenager Nick Sandmann. An account of the incident that a student shared with a local TV station said Phillips and his group forced their way among the students, who at first thought it was a cultural display. After a while, the account said, the boys of Covington Catholic High School became confused.

“It was not until later that we discovered they would incriminate us as a publicity stunt,” the anonymous student wrote. “As a result, my friend faces expulsion for simply standing still and our entire school is being disparaged for a crime we did not commit.”

Student Nick Sandmann, who has become a focal point of a social media firestorm for supposed racism, issued a statement saying he and other students have faced death threats and other harassment. He denied that he harassed the activist Phillips.

Congressman Massie told LifeSiteNews that he visits Covington Catholic High School annually and has never known of any racist incidents there. “I think that young kids, today, are more tolerant than ever about divergent political views and different races,” he said. “ … The irony is that the students were targeted with racial slurs.”

Massie called on Americans to be more careful about rushing to judgments when viewing social media. He told LifeSiteNews that he, like many others, was concerned by initial reports that attributed racism to the Covington Catholic students, who are his constituents. However, after watching several videos of the Friday incident, Massie determined that the narrative did not square with what he knew about the students.

“This is a defining moment,” the Republican said, “And I hope people walk away with a lesson that in this day of social media and instant news, you shouldn’t make instant conclusions.”

Massie’s comment as in line with an initial tweet that he posted Sunday: “I was uncomfortable when I saw the video and description that first went viral, so I understand the initial reactions to the Covington Catholic video. I chose to wait for more facts before responding because the narrative did not match what I know to be the character of these students.”

Massie told LifeSiteNews that one of the students is now under police protection. Deploring threats of violence directed at the students and families, Massie pointed out that threats to schools and students are illegal. He said a Kentucky prosecutor has warned that he will pursue charges against any person threatening violence. Reportedly, an attorney is preparing to sue news outlets that erroneously reported on the incident

Massie noted that students from Covington Catholic High School have been attending the March for Life for decades at their own expense and are of commendable character.

“These are the kind of kids who do the right thing when the cameras are not on,” he said when noting that he meets with students at the school every year. This was why, he said, that he thought that something was wrong with the narrative that played out on social media. “When you are convicted in the court of public opinion, if you are later exonerated, the exoneration is always on the back page and never re-tweeted as much as the conviction.”

However, the Catholic Diocese of Covington condemned the students and threatened them with expulsion. The students’ critics included not only leftists but also fellow Catholics such as Princeton professor Robert George, who later retracted his statements.

This is the statement released earlier today by the Diocese of Covington and Covington Catholic High School: pic.twitter.com/BHkicFI3I0

Sandmann, who faced Phillips peaceably during the incident, issued a statement Sunday that clarified his point of view. It said in part:

“I am being called every name in the book, including a racist, and I will not stand for this mob-like character assassination of my family’s name,” he said. “My parents were not on the trip, and I strive to represent my family in a respectful way in all public settings.

“I have received physical and death threats via social media, as well as hateful insults. One person threatened to harm me at school, and one person claims to live in my neighborhood. My parents are receiving death and professional threats because of the social media mob that has formed over this issue.”

1. Catholic teens minding their own business on a class trip

Who's in the wrong?

This kid, who's life is currently being destroyed, actually gestures to his friend to show Nathan Phillips respect during his drumming! All of it happening of course with another activist is screaming to go back to Europe because all he can do is be white? #CovingtonCatholic pic.twitter.com/OaK6MX5m2S