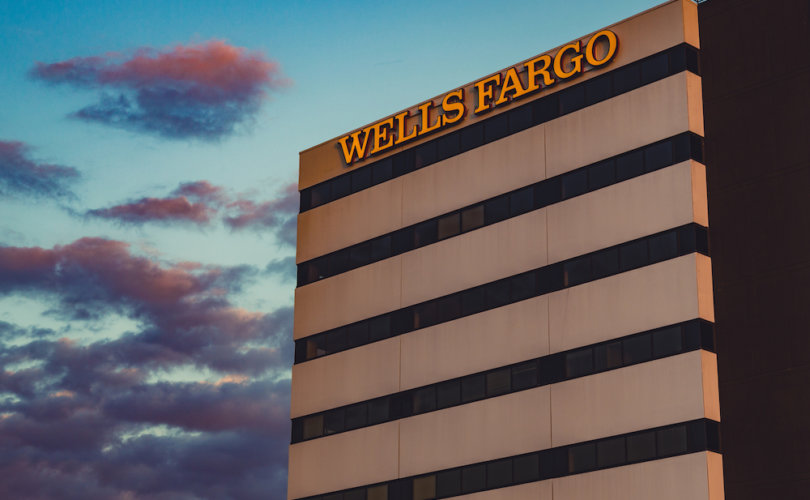 Earlier this month Wells Fargo closed the account of Christian conservative speaker and former Republican senatorial candidate Lauren Witzke, while she was traveling out of state, leaving her without access to her own financial resources.

The former 2020 candidate for the U.S. Senate in Delaware and talk show host on Christian broadcast network TruNews wrote on Telegram, “Had I not been surrounded by friends in Florida, I would be completely stranded.”

When Witzke called the bank to enquire about the closure, she was told it was a “business decision” and that the bank reserves “the right to close [her] account at any time.”

In sharing the news on Twitter June 15, D’Abrosca said this was done with “no explanation,” and suggested it clearly had something to do with his very public political views.

In a letter penned to federal banking officials in the Treasury Department, Gosar indicated that Witzke had contacted him, alleging these closings were done “for discriminatory purposes in violation of federal banking laws.” Furthermore, he stipulated that Witzke was told by branch employees upon her initial inquiry that the decision to implement the closure was for “political reasons” and also “‘business reasons’ pertaining to Ms. Witzke’s Christian beliefs and Christian advocacy.”

HUGE: @DrPaulGosar calls for an investigation into Wells Fargo for religiously persecuting their clients!

Christians are a protected class and we will NOT be discriminated against.

Thank you Congressman Gosar for standing up for Christians against Wells Fargo. pic.twitter.com/yvgv1U9Rjf

“I am asking your office to open an investigation into this matter. It is my understanding that regulated banks cannot discriminate against customers because of the customer’s religious beliefs,” Gosar wrote.

For support of his argument, the former dentist turned politician went on to cite the Equal Credit Opportunity Act, the Civil Rights Act of 1964, and the Fair Housing Act, all of which prohibit a bank or others from discriminating on the basis religion including the “protected class” of Christianity.

“By closing her account due to her membership in a protected class, Wells Fargo may have engaged in discriminatory lending practices and public accommodation,” wrote Gosar.

He goes on to note the Wells Fargo termination of D’Abrosca’s account on the same day, and this second “Christian advocate” was given an identical reason for the closure: “It was a business decision.”

With an apparent mocking of this rationale given, the America First Caucus congressman wrote, “It is tautological to describe a business reason to terminate a customer account as a ‘business reason.’” Such a description simply means “in essence ‘because,’” providing no actual reason at all.

— Article continues below Petition —
PETITION: No to government and corporate penalties for refusing COVID-19 vaccine
Show Petition Text
103112 have signed the petition.
Let's get to 125000!
Thank you for signing this petition!
Add your signature:
Show Petition Text

“In light of the commonality of their strong Christian advocacy and public statements in support of Christian values, well-documented, and when compared to the opaque ‘justification’ of ‘business reasons’ it would appear a prima facia case of religious discrimination could have occurred,” he explained.

About two weeks ago, a spokesman for Wells Fargo staunchly denied any political impetus behind the closure of Witzke’s account.

“Wells Fargo does not consider political views or affiliations in making account decisions,” a spokesperson for Wells Fargo told LifeSite via email, adding that accounts “may be closed for a number of reasons based on individual facts and circumstances.”

After explaining that they “cannot discuss customer accounts because they involve confidential customer information,” the spokesman defended the decision to close the conservative pundit’s account, claiming that the company has “reviewed this situation, gave ample notice of our decision and it was handled appropriately.”

In response to his recent cancelation by the firm, D’Abrosca told the National File, “Clearly there’s been some kind of conspiracy within Wells Fargo to ban prominent right wingers from using their banking services. This is yet another reminder that major monopolies in both banking and tech are not operating within a purely free market capitalistic system. They must be broken up, and their CEOs and executive level employees and board members jailed until we can figure out how to stop discrimination from ‘private’ companies against the political right.”

In response to the removal of D’Abrosca’s savings from their books, Wells Fargo issued the same statement as they did with Witzke, denying a political motivation and emphasizing that “ample notice of our [Wells Fargo’s] decision” was made.

John Zmirak, author and senior editor at The Stream, commented on the increase of private businesses targeting individuals who espouse conservative views and reject the political pressures of the so-called woke Left.

“Companies like that deserve massive boycotts, street pickets at all their locations, and ultimately to get regulated out of existence by Republicans wherever possible,” Zmirak wrote in a blog Thursday.

“There’s no neutral ‘free market’ anymore. The left has made it a blasted No Man’s Land, and we must fight to win, insisting on nothing less than unconditional surrender. Don’t spare corporate America till it looks like post-war Japan.”