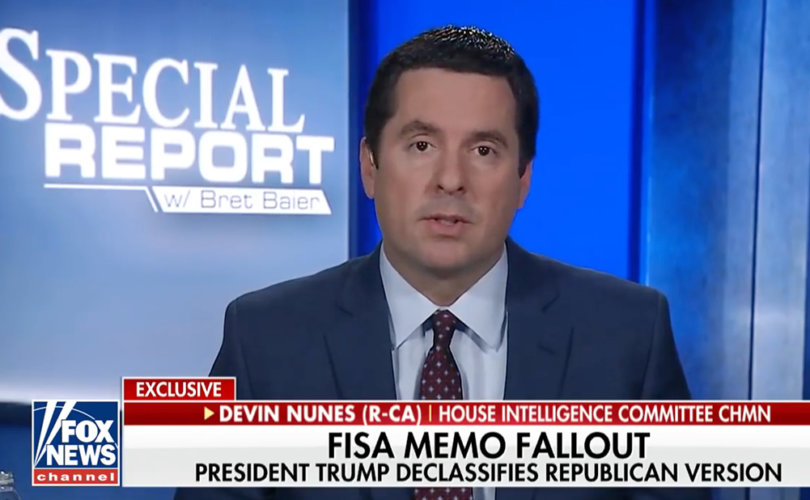 September 3, 2019 (LifeSiteNews) — A Republican lawmaker who has taken Twitter to court over “shadow-banning” him and other conservatives sat down with Breitbart over the weekend to discuss his case, the broader stakes of tech giants’ political bias, and what remedies are available to conservatives heading into the 2020 election.

Last summer, Rep. Devin Nunes (R-Calif.) was one of several prominent Republicans whose Twitter accounts had disappeared from the drop-down menu that normally populates when typing in a name, without comparable figures such as Democrat National Committee Chair Tom Perez or any of the 78-member Progressive Caucus being affected. Twitter soon corrected the problem and denied that it engaged in shadow-banning (the practice of restricting a user’s visibility without notifying him).

In March, Nunes filed a complaint in Virginia state court accusing Twitter of attempting to undermine his work as then-chairman (now ranking member) of the House Intelligence Committee. He seeks damages for shadow-banning “calculated to interfere with and influence the federal election and interfere with Nunes’ ongoing investigation as a member of the House Permanent Select Committee on Intelligence” and for “knowingly hosting and monetizing content that is clearly abusive, hateful and defamatory.” The suit also seeks an order compelling Twitter to produce the identities of various users he claims harassed and defamed him.

“Well, in general, I have a real concern overall about what I call the ‘tech oligarchs,’” Nunes told Breitbart News Sunday this weekend. “But Twitter has been the worst, especially to me. So if you look at what they’ve done, specifically to me, is they enforce their rules selectively. So I’m arguing they’ve operated their property negligibly. They’ve been negligent with the operation of their property, and they’re actually content developers.

“They have had it their way for a long time by having this ability to get out from lawsuits because Congress has actually carved out a special provision in law for them because they were supposed to be an open square — an open public square; they’re the Internet,” he explained, referring to Section 230 of the Communications Decency Act, which many conservatives have identified as a key factor in the problem. “So they’re not treated like someone like, say, some other kind of product would be treated like a car, for example, or a kitchen appliance. They’ve had this special carveout for 20 years.”

“They now are regulating the content, and they’re deciding how to regulate the content — and it’s clearly biased against conservatives,” Nunes continued. “So we are looking at them for operating their property in a negligent way, and then we’re suing others for defamation. Look, this is not the way I want to go about it, especially for someone like me. I don’t like going to have to use the court system, but it’s really the system of last resort.”

The congressman said the “easiest way that this can all be solved” would be if internet platforms and services simply withdrew from content development and returned to the old status quo of being more hands-off “open squares.” But “this is just not going to happen,” he lamented, and “I’ve run out of patience.”

Nunes noted that “nothing can be done” legislatively before 2021 at the earliest because Nancy Pelosi “controls the House, and she is going to ensure that nothing happens to these companies as we sit right now.” That leaves lawsuits like his as the best response for the time being, he argued. (Conservative pundit Dennis Prager is also suing YouTube for restricting his PragerU videos under false pretenses.)

“I’m in the best position to do it because I’m one of the ones who’s been most slandered,” Nune said. “So hopefully, the courts will step in, right? If I can win one of these cases, it will really set these guys back. If the Covington school kids can win a case, that would set them back. So I think between defamation laws and treating these tech companies what they are, which is property, this is going to be the fastest and only way to solve it before 2020.”

Facebook, Twitter, Google/YouTube, and Pinterest all suffer from ongoing bias and censorship scandals. Dr. Robert Epstein, a research psychologist with the American Institute for Behavioral Research and Technology, estimates that Google’s search results swung as many as 2.6 million votes to Hillary Clinton in 2016 (potentially accounting for the Democrat nominee’s popular-vote margin of just under 2.9 million). Epstein also testified that he has identified “nine different blacklists Google maintains to suppress information worldwide.”

Last week, Judge John Marshall asked Twitter for more information pertaining to two of the anti-Nunes accounts in question, the Fresno Bee reports. Marshall has yet to decide on Twitter’s request to dismiss the case on jurisdictional grounds.