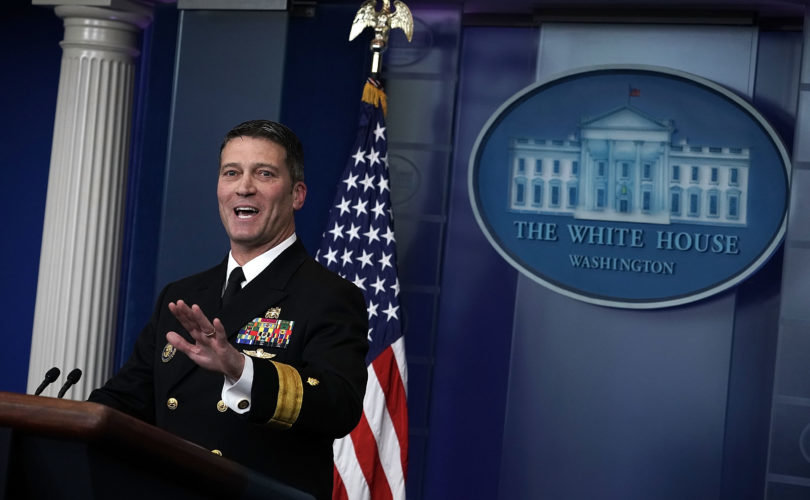 ORLANDO, Florida, June 18, 2021, (LifeSiteNews) — In a short speech at the Faith and Freedom Coalition’s Road to Majority Conference in Orlando, Florida, Texas congressman and former White House physician Dr. Ronny Jackson took the stage to encourage conservatives to get out in large numbers, recognize the importance of down-ballot elections, and not be afraid to speak up about their values.

Texas Congressman Dr. Ronny Jackson, who served as the White House physician for presidents George Bush, Barack Obama, and Donald Trump told the audience that being Trump’s personal physician was “just the best job I ever had,” and said he regretted not being able to serve in that capacity with Trump for a second term.

The former Navy Rear Admiral warned Road to Majority Conference attendees that, under the current administration, “we are headed to a socialist, Marxist existence in this country. They are tearing down everything this country represents. They want to burn it to the ground and rebuild it. And they’re doing it at warp speed.”

Jackson said he is often approached by people asking what they can do to fight back against the radical agenda of leftist politicians. He said he hesitates to tell people to show up in big numbers and to vote, because that was what was done in 2020 and the election was still lost. However, he said it is important to keep fighting.

Dr. Jackson recently made headlines after he and 13 GOP colleagues penned a letter calling on President Biden to submit to a cognitive test to prove his mental fitness for office.

“Unfortunately, your mental decline and forgetfulness have become more apparent over the past 18 months,” the letter reads. “We encourage you to follow the example set by President Trump by undergoing a cognitive test as soon as possible and immediately making the results available for the American people.”

“Given the precedent set and Biden’s clear mental impairment, I believe it is past time he undergo a cognitive test,” Jackson said in a statement.

At the Road to Majority Conference today, Jackson said “the people who voted for Biden have buyer’s remorse,” and suggested that broadcasting the current administration’s myriad problems and failures may help to gain traction among those dissatisfied with Biden’s performance.

But the congressman said that federal offices and elections aren’t the only ones worth noticing.

“In addition to getting out in big numbers, the one thing I can tell you is going to make a big difference in this county: you’ve got to pay attention to all these down-ballot issues too. School boards, and mayors and judges,” Jackson said.

“For a long time the Democrats have been working to overthrow this country,” Jackson argued. “Look what they’ve done to our educational system. They have spent decades brainwashing our children.”

Jackson, who has been married for 28 years with 3 grown children currently in public service, went on to observe that while it has long been understood that radical ideologies are promoted on university campuses, currently the indoctrination begins in elementary schools and even pre-schools.

Jackson encouraged conservatives to be upfront about their views, discussing them with their friends, neighbors, and relatives. According to Jackson, generating public outcry about radical ideology has the power to block destructive bills from getting passed.

He said that efforts by radical politicians like members of the so-called “squad” (including Ilhan Omar, Ayanna Pressley, and Alexandria Ocasio-Cortez) to pass abhorrent legislation has been checked by public dissent generated by conservatives spreading the word.

“They have the most radical, unbelievable, disgusting policies that you could imagine,” Jackson said, adding that extreme policies are often couched in bills given “some cute name” to conceal the true nature of the proposal

“We’ve proven that we can make a difference,” Jackson said, “by just getting out and talking about the garbage that’s going on.”

Jackson concluded by thanking the participants in the conference, calling them “true patriots” who are “out there on the frontlines trying to take the country back.”