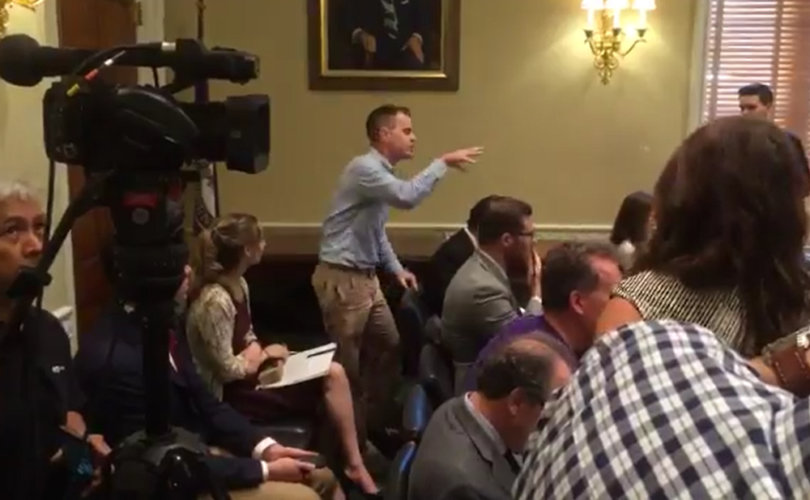 This type of resolution neither creates a law nor is enforceable. It is a way for members of Congress to express an opinion. The Republican-controlled Congress could have blocked Washington, D.C.'s assisted suicide law after it was enacted but failed to do so.

Rep. Brad Wenstrup, R-Ohio, introduced the resolution, which warns that physician-assisted suicide “puts everyone, including those most vulnerable, at risk of deadly harm and undermines the integrity of the healthcare system.”

A coalition of disability and patients’ rights groups joined Wenstrup in introducing the resolution. A pro-assisted suicide protester interrupted Wenstrup as he introduced the bill, accusing him of not telling the truth. His comments can be heard in the distance on the Patients Rights Action Fund's video of the press conference.

After the resolution’s press conference during a question and answer session, a woman with ovarian cancer detailed the pain and many hospital visits caused by her disease, saying she wants the option to kill herself.

The woman accused the coalition of “spreading misinformation,” not speaking for D.C. residents, and seeking to “impose your will and your beliefs on me.”

One of the disability rights activists, who uses a wheelchair, responded.

“When you take away choice from people that are helpless and defenseless and you impose policies to make (assisted suicide) legal then you basically sign everybody here’s death certificates. That’s what you don’t see,” she said.

In tears, she went on, “You don’t know how many people have told us to our faces, ‘you guys should be dead,’ and how hard we have fought just to be treated like human beings … and not some thing in a chair. That’s what it’s about.”

The exchange begins 30 minutes into the video of the press conference.

The Patients Rights Action Fund, Physicians for Compassionate Care, National Council on Independent Living, ADAPT, Not Dead Yet, and the Disability Rights Education and Defense Fund praised Wenstrup and his colleagues for speaking out against assisted suicide.

“Many do not realize that people battling terminal illness, people with disabilities and others are inadvertently targeted by the legalization of assisted suicide,” said JJ Hanson, a terminal cancer patient who is the President of the Patients Rights Action Fund. “I am grateful to Congressmen Correa, Vargas, Wenstrup and all of the other co-sponsors for introducing a Sense of Congress resolution. This bill brings attention to this important issue and takes a big step toward protecting me and so many others.”

In 2015, the Patients Rights Action Fund released a video of Hanson with his wife and young son explaining how in 2014, he was only given a few months to live when he was diagnosed with the deadliest form of brain cancer. He's still alive today.

“Empowering doctors to assist patients in killing themselves has led to an inevitable erosion of trust in the motives of doctors, healthcare institutions, and insurers,” said William F. Toffler, national director of Physicians for Compassionate Care Education Fund. “This has been detrimental to patients, degraded the quality of medical care, and compromised the integrity of medical profession wherever assisted suicide has been legalized. The solution to suffering is not to end the life of the sufferer; rather society's focus at the end of life should be to alleviate suffering by improving access to hospice and palliative care whenever it is needed.”

The resolution notes that the U.S. Supreme Court has ruled twice, in Washington v. Glucksberg and Vacco v. Quill, that there is no constitutional right to assisted suicide. The Court ruled “that the Government has a legitimate interest in prohibiting assisted suicide, and that such prohibitions rationally relate to ‘protecting the vulnerable from coercion’ and ‘protecting disabled and terminally ill people from prejudice, negative and inaccurate stereotypes, and ‘societal indifference.’”

Laws legalizing assisted suicide have been passed in five states and the District of Columbia.

A Montana court ruling allows doctors who are prosecuted to use the patient’s request to die as a potentially viable defense in court. Twenty-three other states have rejected bills attempting to legalize assisted suicide since the beginning of 2017. More than 30 states have rejected over 200 attempts at legalization since 1994.

“Our society places a high value on physical appearance and ability, and stigmatizes significant disability. It's no surprise that those of us who grew up able-bodied and then became disabled might initially see disability as a huge loss of one’s former dreams and physical abilities,” said Kelly Buckland of the National Council on Assisted Living.

“When someone is first hit with this, they may feel they’d be better off dead. As one struggles to get basic needs met, some people feel worn down,” she continued.

Buckland explained that had assisted suicide been legal in the past, “even if it were supposedly only for those with ‘terminal’ conditions, I might not be here today.”

“I’m grateful that assisted suicide was not legal back then, and I'm committed to keeping it that way,” she continued. “This is an important reason why the National Council on Independent Living opposes assisted suicide laws. NCIL is a leader in the disability rights movement, our political struggle for equal rights. And, among other things, equal rights include equal suicide prevention.”

“The National Alliance Against Assisted Suicide shares this mission in general and collectively supports this specific legislation and no other at this time,” the Alliance stated in a press release.