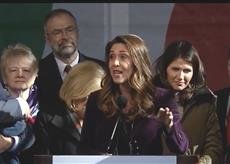 WASHINGTON, D.C., January 19, 2018 (LifeSiteNews) — Among the March for Life Rally speakers this year was a Republican Congresswoman whose daughter’s story is a testament to life, hope and divine intervention.

Rep. Jaime Herrera Beutler of Washington introduced her daughter Abigail, 4; son Ethan, a toddler; and husband Dan from the podium as she began her speech. Her children’s interjections throughout — lovingly managed by their mother — punctuated an already poignant testimony and offered a tender snapshot of real life.

Ethan persistently vied vocally for his mother’s attention as she recounted their experience, never mind she was in the process of addressing hundreds of thousands of March for Life pilgrims. And at one point Abigail asked why she would have been crying as she described the couple’s reaction to the girl’s devastating adverse prenatal diagnosis.

“I’m telling them,” her mother explained, to laughs from the crowd.

“Unborn babies are almost magical,” Herrera Beutler began, “they’re literally swimming in stem cells, they’re in their perfect incubator, they’re responsive to the breakthrough medical treatment that we had convinced our doctor to try.”

Not long after Herrera Beutler began her second term in Congress, she and Dan went for her 20-week ultrasound as excited first-time parents.

“We were told that our unborn baby as zero percent chance of survival,” Herrera Beutler said, “zero.”

The baby had no kidneys, Herrera Beutler continued. It was a condition called bilateral renal agenesis.

“And as a result our baby would either miscarry or she would be born unable to breathe because her lungs would be unable to develop,” the congresswoman recalled. “She would literally suffocate upon arrival. And there was nothing anyone could do about it.”

“Talk about hopeless,” she said.

The couple’s doctor told them women usually head across the street for an abortion when receiving this diagnosis.

At a second consultation, they were given the option to induce early, meaning immediately, with the same end result as abortion.

The sooner you start over, the sooner you’re going be better emotionally, Herrera Beutler and her husband were told.

“What if God would do a miracle?” she asked. “What if a doctor was willing to try something new? What if we could get saline infusions in utero to mimic amniotic fluid to the baby could develop even without kidneys? What if … ”

“We would never have known if we hadn’t tried,” she told the crowd.

“And through divine intervention,” Herrera Beutler continued while choking up, “and some very courageous doctors who were willing to take risk we now get to experience our daughter Abigail.”

“Who is a healthy, happy, big four-year-old sister,” added Herrera Beutler, “who says that someday she’s going to be the boss of Mommy’s work.”

The crowd cheered this.

“Look out Speaker Ryan,” Herrera Beutler joked in the direction of the Wisconsin Republican who had addressed the rally earlier

Their daughter was a medical miracle, Herrera Beutler has said. The experimental treatment worked, and Abigail was born without kidneys, becoming the known first child to breathe on her own without both kidneys. Dan Beutler would later give his daughter one of his kidneys.

Herrera Beutler told the March for Life audience that because others have heard their story, now other children with the condition would have a chance.

“I was told there was no chance of survival, but they were wrong,” she stated. “And they weren’t bad people, they had just never seen a baby with this condition survive.”

“But that’s the point,” she emphasized. “What if they’re wrong about others too?”

Herrera Beutler posed additional questions for the pro-life crowd to ponder about preserving life for children with adverse diagnosis’ in the womb, netting additional cheers for those as well.

“What if together we can break new ground and find new treatments that will benefit more than just our own families?” she asked. “What if the baby won’t have that significant condition or medial deficiency? Or even if she does, what if every baby was given at least a shot to reach their true potential?”

“Who would we be as a nation?” Herrera Beutler went on. “What richness would we get to see, instead of the equivalent of two generations missing – because of that choice?

She asked whether the person meant to find a cure for cancer or end poverty could have been aborted, and also what could have happened if time and money would have been poured into finding cures in the womb for serious medical conditions and defects?

“What if that money was used to end the baby’s disease and not the baby’s life?” Herrera Beutler asked to more cheers.

What if instead of spending millions of dollars every year on abortion, that money was invested into caring for the babies who are born with significant health condition or disability, she asked.

She then pointed out how everyone knows someone with serious illness or disability who has enriched their lives immeasurably and that it’s difficult to imagine a world where they were never born.

“We should embrace full diversity,” Herrera Beutler implored the crowd, “which includes physical and mental abilities, all different ones – different abilities.”

“What if we celebrated disability instead of letting fear make it our mortal enemy?” she added.

She concluded by stating there is hope – for every expectant mother who has been given a devastating diagnosis, for every woman who feels fear, or anger or anxiety because she doesn’t know how she can afford to care for that child.

“For every woman who feels hopeless” Herrera Beutler told the crowd, “Jesus loves you.”“And for every baby that’s been given up on by the status quo,” she added, “Jesus still does miracles.”

Her reminders of Christ’s love for every one of His children yielded exuberant cheers.

“After all, I believe it’s the only way our society every truly is going to reach ours.”