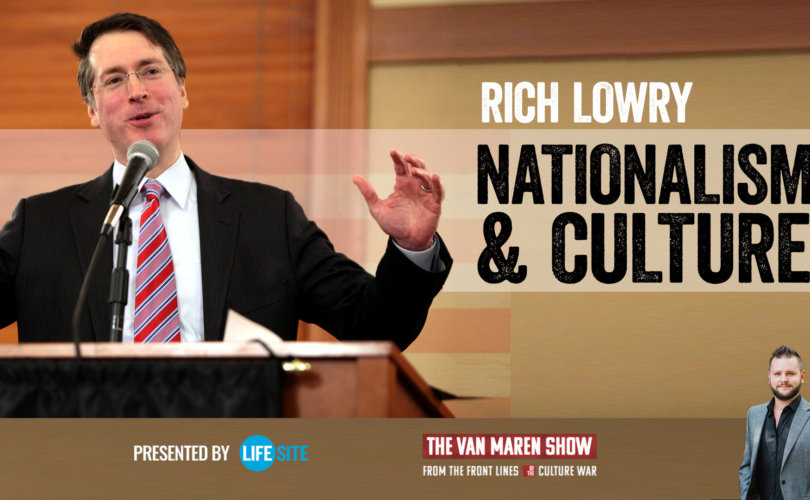 December 11, 2019 (LifeSiteNews) – In today’s episode of The Van Maren Show, Jonathon Van Maren speaks with National Review editor Rich Lowry about his latest book, The Case for Nationalism: How It Made Us Powerful, United, and Free. Lowry has authored other books, including the New York Times bestseller Lincoln Unbound and Legacy: Paying the Price for the Clinton Years.

Van Maren and Lowry speak about the latter’s book, where America is headed, “the age of Trump,” and the rise of division in our political climate.

Lowry begins by drawing a distinction between patriotism and nationalism. Patriotism is the love of “patria” or fatherland. Nationalism is the doctrine that a distinct people united by a common culture, a common history, and very often a common language should govern a distinct territory.

Lowry points to Ancient Israel and Joan of Arc as examples of early nationalism, but makes a distinction between these examples and modern nationalism. Modern nationalism began in the 19th century. “It's a movement led by people who believe in popular sovereignty, equal rights, and are rising up in opposition to empires or to monarchs.”

It is important not to conflate nationalism and Nazism, Lowry reminds listeners. It was the democratic nationalists, Churchill, de Gaulle, and FDR who opposed Hitler’s Nazism.

Lowry credits the reemergence of the term nationalism to Trump’s use of it. He argues that Trump’s calls for nationalism have spurred people to reevaluate the meaning and use of the term, even though it has always been “a thread of the conservatism” in America.

Lowry then dives into his “case for nationalism,” the focus of his book. Lowry points out that to have a true, long-lasting democracy, a sense of unification and nationalism is necessary. “If you have a truly unified nation where all people feel a sense of common feeling of belonging, then you have that trust that makes democracy and a market economy possible.”

He points to the Middle East and Africa where there is no sense of nationalism, just a sense of belonging to a tribe or sect. This leads to discord between sects, unrest, and eventually civil wars and coups.

Lowry also points out that nationalism doesn’t directly tie to a set of beliefs, such a conservativism or liberalism or libertarianism, but “the kind of lowest common denominator as of is willing to put our people first.”

Defending the culture, Lowry highlights, is a key factor for establishing a nationalism. Without a cohesive and strong culture, nationalism cannot exist because there is no unifying force. Language, Lowry argues, is a key factor in establishing and maintaining a strong culture. Lowry points to the division in Catalonia in Spain, and in French-speaking Quebec. He emphasizes the need for the primacy of English in order to maintain the culture.

Van Maren and Lowry also point out the recent attacks on Thanksgiving as an attack on our culture.

“The cultural core of our nation is under pressure more than ever before,” Lowry tells reader.

Lowry argues that we must acknowledge our history, not shy away from or hide the mistakes of the past. He sees the current anti-America movements that see America as “rotten to its core” as extremely detrimental to the fabric of our nation.

Lowry and Van Maren turn their attention to the current division in the cultural and political climate and the impact this will have on nationalism, as well as how we can recover from this division. They also discuss the 2020 campaign, who Lowry thinks will gain the Democratic nomination, and what America would look like if Trump – or a Democrat – wins in 2020.