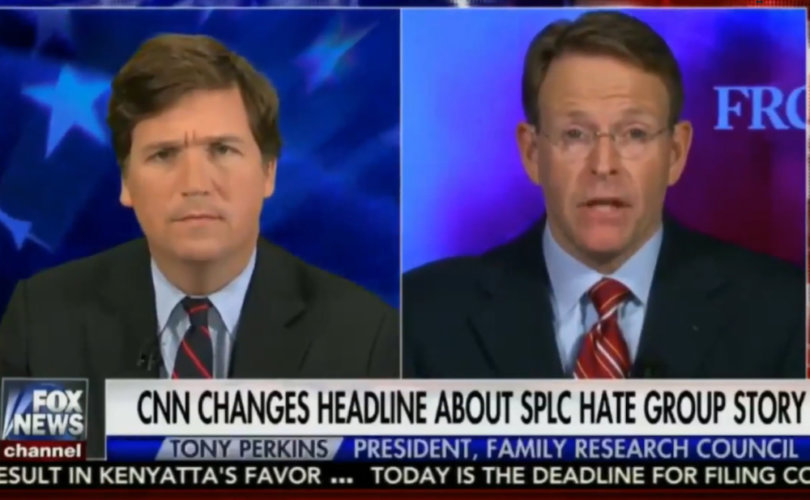 September 7, 2017 (LifeSiteNews) — A coalition of 47 conservatives has written a letter appealing to the media to stop citing the Southern Poverty Law Center (SPLC) as an authority on “hate,” calling it “an attack dog of the political left” that slanders traditional conservatives as “extremists.”

In the wake of the race protests and riots in Charlottesville, Virginia, CNN and other media and blogs have cited the SPLC’s “hate map” as a guide to locate “hate groups” and “extremists” across the United States. Many of the map’s entries, such as the Aryan Nation and the Ku Klux Klan, are actually extremist fringe groups espousing racism and anti-Semitism.

However, the highly partisan SPLC mixes in these disreputable outfits (most with very small followings) with dozens of mainstream conservative groups like Family Research Council that oppose the LGBTQ agenda, as well as organizations that oppose unrestrained immigration and radical Islam and sharia law.

The coalition letter, organized by the Media Research Center (MRC) and its president, Brent Bozell, states:

“The SPLC is an attack dog of the political left. Having evolved from laudable origins battling the Klan in the 1970s, the SPLC has realized the profitability of defamation, churning out fundraising letters, and publishing “hit pieces” on conservatives to promote its agenda and pad its substantial endowment (of $319 million). Anyone who opposes them, including many Protestants, Catholics, Jews, Muslims, and traditional conservatives is slandered and slapped with the “extremist” label or even worse, their “hate group” designation.”

The letter notes that the Montgomery, Alabama-based SPLC “even added [HUD Secretary] Dr. Ben Carson to its ‘extremist’ list because of his biblical views (and only took him off the list after public outcry).”

It continues: “To associate public interest law firms and think tanks with neo-Nazis and the KKK is unconscionable, and represents the height of irresponsible journalism. All reputable news organizations should immediately stop using the SPLC’s descriptions of individuals and organizations based on its obvious political prejudices.”

The letter, which can be viewed in full here, states that if the media continue to treat the SPLC and its ever-expanding “hate map” seriously, there could be more murderous leftist assaults like the one five years ago against Family Research Council, or the recent leftist assassination attempt against Republican Congressmen.

The lives of FRC staffers — and some visitors at the FRC building — were spared through the heroic actions of FRC building manager Leo Johnson, who wrestled Corkins to the ground, getting shot himself in the process. Corkins’ backpack was filled with Chick-fil-A sandwiches, which he had intended to stuff in the mouths of his murder victims. He was irate at FRC’s (and Chick-fil-A CEO Dan Cathy’s) stance against homosexuality-based “marriage.”

Then a volunteer for a D.C.-area homosexual-transgender group, Corkins is now serving a 25-year sentence for domestic terrorism. Curiously, the notorious Corkins does not have his own listing in left-leaning Wikipedia, which many students use for research.

Despite the near mass-murder, the left-wing “Poverty Center” — which is under fire for transferring hundreds of millions of dollars to offshore accounts in the Cayman Islands — continues to list FRC as a “hate group,” along with dozens of other conservative groups that collectively have many millions of followers.

Popular Fox News talk show host Tucker Carlson, interviewing FRC President Tony Perkins yesterday, said, “To call someone a 'hate group' is to lump them in, in the popular mind … with … Nazis and crazy people, violent people — truly scary people. … It's just so dishonest. It's like treating [the left-wing group] Media Matters like a legitimate media analysis group, which the press also did until they were called on it repeatedly.”

Speaking of the SPLC, Carlson said, “They're totally fraudulent. And it's not even a close call. … They're completely over the top. You spend 10 minutes on their website and it's clear: this is not a group concerned about 'hate.' This is a fundraising organization with a very specific political agenda smearing people in order to raise money. …

“No … honest journalist would ever use them as a source. It's shocking, actually,” he added. Watch the Tucker Carlson interview here.

In the interview, Perkins called the SPLC a “fear-mongering organization. They've raised over $350 million, which they're sitting on, most of it in offshore accounts. It is irresponsible for the media to use them as a source.”