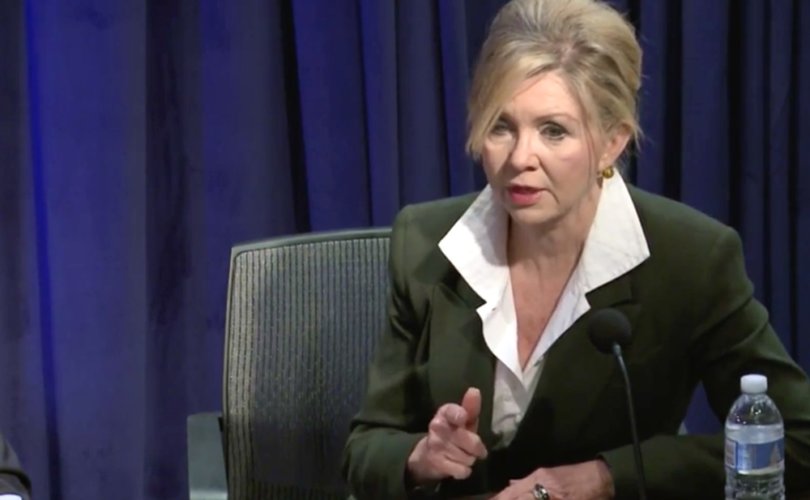 WASHINGTON DC, April 18, 2018 (LifeSiteNews) – A big question facing lawmakers and public policy experts today is, “Does the internet require government regulation, and if so, how much?”

A panel of experts gathered at the Family Research Council’s (FRC) Washington headquarters on Tuesday to grapple with those questions. The panel included Rep. Marsha Blackburn (R-Tenn.), Craig Parshall, and Brent Skorup. They paid particular attention to the fading online presence of conservatives and Christians.

“The entire digital ecosystem is now in the hands of a few very powerful tech companies that have declared themselves arbiters of truth,” pointed out moderator Sarah Perry, “and after losses in the 2016 elections, find themselves with an ideological bone to pick.”

Mark Zuckerberg's testimony “may be finished on Capitol Hill, but Facebook's new algorithm disproportionately impacts conservatives,” declared a statement from FRC.  “Google and YouTube are using the SPLC as a ‘trusted flagger’ for offensive content. The internet leans further left each day.”

Answers from conservative experts about regulating the internet do not align neatly and are sometimes surprising.  While greater regulation has instant appeal to those who feel slighted––if not oppressed––by the content gatekeepers of Silicon Valley’s Online Tech Giants, in the end increased regulation might not be in the best interest of Christians and conservatives.

“Be careful what you wish for,” warned panelist Brent Skorup, Senior Research Fellow in the Technology Policy Program at the Mercatus Center at George Mason University. He added, “because it might not turn out the way you had hoped.”

Opening the door to regulation would be a mistake

For conservatives, said Skorup, there is an inherent tension between “their free market orthodox beliefs” and their desire to deal with “media bias” and “Silicon Valley’s political bias.”

“Zuckerberg was before Congress last week and conceded Silicon Valley is a very left wing place, and it trickles down into its moderation of its platforms,” noted Skorup, adding, “They are well within their rights to decide who can speak on those private platforms.

“I say this because Conservatives seem to be opening the door to regulation of social media because of this real and perceived bias and I think that would be a mistake.”

“That would be inviting the fox into the hen house,” said Skorup.  “If you look at history, where there has been regulation of media––where the government has been involved in meda––it has not been a pretty story.  You live and die at the whims of bureaucrats,” who will not be kind to conservatives.

Skorup pointed out that a couple generations ago, liberals in government “weaponized” the very pleasant, benign-sounding Fairness Doctrine “to bankrupt broadcasters and to drive conservatives and religious out of broadcasting for a generation.”

Congresswoman: To protect innovation, we need to proceed slowly, carefully

Rep. Marsha Blackburn (R-Tennessee), said that if Congress were to intervene by imposing increased regulation on the tech giants, “The intervention would have to be done very carefully.”

“Of course, the big tech companies––Facebook, Amazon, Apple, Netflix, Google––are going to say at this point, ‘Give us some regulation’ because it will keep competition and innovation to a minimum.  It will make [life] easier for them.  They would love to have just one agency that they’re dealing with.”

Civil liberties attorney Craig Parshall spoke about “the slow tendency toward free speech suppression” as the new norm. He gave the example following example: “A college up in New Hampshire recently made the news when its faculty said, ‘Look, don’t talk to us about free speech.  It doesn’t apply to colleges.’”

The ‘new norm’ goes far beyond suppression of free speech, which is simply a symptom of a radical new secular mindset.  Silicon Valley’s “technologists have a different worldview” from conservatives and Christians.  This became evident nearly twenty years ago when at the turn of the 21st century, an editor for Wired Magazine declared, “Now that religion is dead, technology will be the new hope of mankind.”

“I don’t think regulation could change that,” said Parshall.  “I think we need to be evangelists for free speech, and why it is important.”

Parshall said this new mindset os going to be very difficult to deal with.  “We need to find a way to incentivize them … to allow equal space for equal viewpoints on their ubiquitous platforms.”

Parshall also cautioned that because of the complex nature of the issues presented by the internet, employing trust-busting laws like the Sherman Act would be “a blunt instrument and we need a scalpel.”

“I think it’s entirely appropriate for private groups to put pressure on these companies to deal in a fair and transparent way,” said Skorup.  “I think they do have problems.  I think that to some extent they realize it, and they will muddle through.  They will make mistakes.  This is new for everyone.  And it will take time, and I am hopeful and optimistic that in time there will be a good equilibrium.”