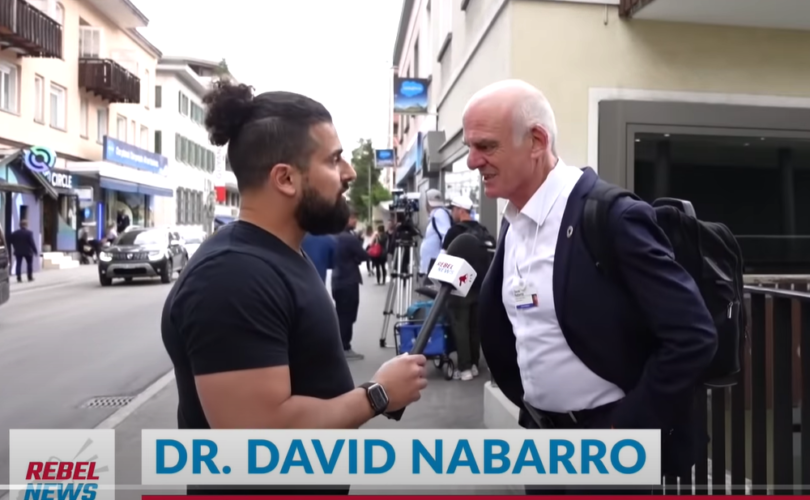 In the first video posted by Yemini on May 30, the reporter can be seen walking the streets of Davos with a microphone alongside Dr. David Nabarro, special envoy on COVID for the WHO.

In the video, Yemini brings up the fact that the WEF summit touched on the topic of “regaining trust” with the public and asks Nabarro, who was a guest at the WEF summit, if he thinks the lack of trust has anything to do with the actions of the WHO during the COVID-19 so-called pandemic.

“So, um, for me trust has been difficult to maintain with COVID,” replied Nabarro, who then asked Yemini who he was reporting for.

“Rebel News,” answered Yemini, who followed up by asking, “Why do you think it has been hard to maintain trust through COVID?”

Switching gears, Yemini, an Australian, put the pressure on Nabarro by asking him if he agreed with lockdowns, particularly the harsh lockdowns imposed in various jurisdictions of Australia.

“I do not like commenting on decisions of individual governments,” Nabarro said. “There’s no hard and fast rule, so I will not answer the question by agreeing with your statement [that Australia’s lockdowns were too harsh].”

Shortly thereafter, Nabarro stops walking and tells Yemini that his questions are “aggressive” and that the interview is being done “against my approval.”

“People are forced vaccinated, do you think that’s OK? That’s against their will. The WHO pushed the vaccine,” Yemini charged.

Nabarro replied, saying he has never called for forced vaccination, and sees “vaccine mandates” as “a last resort.”

“At what point should you ever force someone to have a vaccine? [Is there] any resort?” Yemini inquired.

Nabarro then says his personal opinion is that he would “never want anything mandated.”

“Why is that not the WHO official position?” asked Yemini, to which Nabarro said he is “not giving” the WHO “official position” and turns to the camera to tell the viewers directly that he is doing his best to answer the questions while being “ambushed.”

Nabarro ended the interview by saying that the reason people “blame the WHO” for harsh COVID measures and other COVID-era policies is because the “pandemic has been horrible” and people are looking for something or someone to put that blame on.

Nabarro then insisted that the WHO is merely trying to “offer the best advice it can to everybody.”

In the second video posted by Yemini, titled “Confronting Chief UN Clime Hypocrite,” the reporter takes a similar strategy as with Nabarro and approaches UN Climate Action Special Envoy Mark Carney on the streets of Davos.

“Look, I’m not doing a stand-up interview, OK?” Carney tells Yemini as he holds the microphone to the UN affiliate.

“I do lots of media,” Carney says, to which Yemini immediately shoots back, “Friendly media.”

Carney then attempts to tell Yemini that he does media with outlets with various viewpoints, to which Yemini asks if he can have a sitdown chat with the official to ask him “some actual, tough questions.”

“You can make a request for a meeting,” laughs Carney.

“So you can deny it.” Yemini retorts.

The video ends with Carney walking off as Yemini walks alongside him saying that “the whole world is looking at this now going, ‘you’re a pack of hypocrites,’ and you’re at the top of the chain there! What would you answer people? Just give me one answer to the people.”

As reported by LifeSiteNews, the World Economic Forum is a group of globalist billionaires, politicians, organizations, and corporate executives who meet in Davos, Switzerland on an annual basis to talk about their plans for the future of the planet and humanity.

The group has drawn immense controversy and skepticism during the COVID-era, particularly after publishing the details of their “Great Reset” agenda, which states that by the year 2030 that “you’ll own nothing and you’ll be happy.”

The Great Reset is a radical socialist plan designed by global elites that “seeks to ‘push the reset button’ on the global economy” and establish a radical New World Order that seems to closely emulate many aspects of the Chinese Social Credit System.

In fact, WEF chairman Klaus Schwab has consistently praised Chinese Communist leader Xi Jinping, claiming that the authoritarian leader who has been credibly accused of genocide has made “significant social and economic” strides under his leadership.

Summing up the “Great Reset,” Schwab wrote, “To achieve a better outcome, the world must act jointly and swiftly to revamp all aspects of our societies and economies, from education to social contracts and working conditions. Every country, from the United States to China, must participate, and every industry, from oil and gas to tech, must be transformed. In short, we need a ‘Great Reset’ of capitalism.”