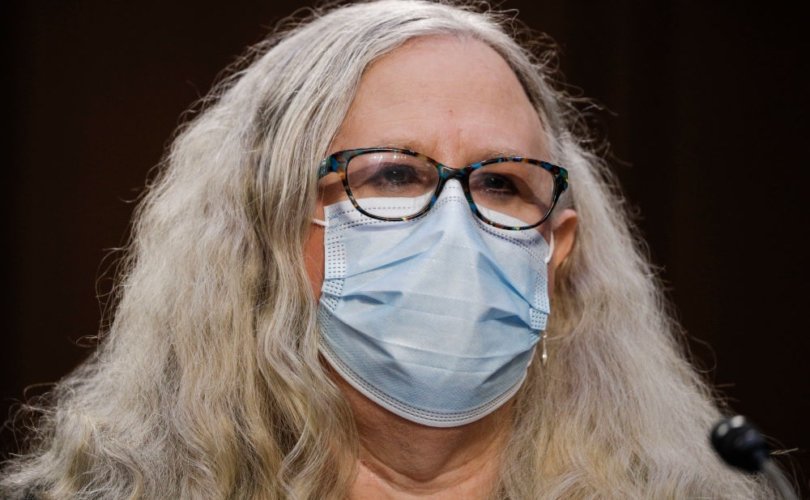 (LifeSiteNews) — Conservative podcaster and journalist Jack Posobiec on Saturday flagged what he termed “a dark alliance” between top state and federal officials and a Philadelphia children’s hospital to promote and perform destructive “gender transition therapy” on foster youth for profit.

According to Posobiec, a podcast host and senior editor at Human Events, the “alliance” involves Pennsylvania’s Democratic Attorney General Josh Shapiro “and politicians like him,” along with the Children’s Hospital of Philadelphia (CHOP) and Dr. Richard “Rachel” Levine, a man who says he is a woman and serves as the Biden administration’s Assistant Secretary for Health.

“[I]t’s all about money,” Posobiec said, adding “…the younger they get you, the more money they can get [from] you over the course of your life.”

Posobiec made the comments during a speech in Pennsylvania, where he was promoting Republican candidate Sen. Doug Mastriano for governor against Shapiro. Smeared by left-wing outlets as a “far-right” candidate, Mastriano has introduced legislation to ban gender surgery for minors and voted to keep boys out of girls’ sports.

Wolf, meanwhile, alongside Attorney General Josh Shapiro, has worked to force girls to compete against males on sports teams. Earlier this year, Pennsylvania’s current Democratic Gov. Tom Wolf called a Texas law requiring the investigation of transgender medical intervention as child abuse a “a vile attack on transgender children and the families that support them.”

BREAKING: ‘There is a dark alliance between Josh Shapiro, the Children’s Hospital of Philadelphia, and Rachel Levine putting minors from the foster system into “gender transition therapy” in the name of making money. And we have them on video’pic.twitter.com/GevEIWMi8g

Posobiec’s comments came amid resurfaced videos of top political and medical officials saying they would provide transgender therapies for foster youth because they lack a parent who might object.

Late last month, video emerged of CHOP gender clinic co-founder Nadia Dowshen explaining during a Pennsylvania House of Representatives’ Health Committee Q&A on “Appropriate Care Models for Transgender Minors” that children from the foster care system and homeless shelters have been referred to her gender clinic for treatment.

In the September 2020 clip, made public in a September 29 Twitter thread by Megan Eileen, Dowshen said that while some referrals come from children’s pediatricians or the family themselves, others have come “from other institutions and other youth-serving professionals who are working with youth in other capacities, sometimes from within the foster care system or the mental health system, through homeless shelters for youth who are in need of support.”

Eileen also included a 2017 clip of Levine (then Pennsylvania’s Physician General), explaining that children in foster care can be given transgender hormone treatments.

“If they are under 18 and they are on the street and they are completely emancipated from their parents, then you can do treatment,” Levine said at the It’s a Transgeneration: Issues in Transgender Medicine event at Franklin and Marshall College.

In another tweet, Eileen provided a screenshot from a 2020 Q&A in which Linda Hawkins, co-director of CHOP’s Gender and Sexuality Development Clinic, explicitly said she and Dowshen worked with Levine over the previous two years to conduct “trainings throughout the state of Pennsylvania” regarding “transgender and gender expansive and gender nonbinary patients and clients of all ages,” through which they reached “nearly 2,000 therapists across the state.”

Twitter users reacting to Eileen’s thread expressed outrage and were also quick to notice the Children’s Hospital of Philadelphia’s acronym. One user pointed out that in the context of transgender surgeries, the name CHOP was “a bit on the nose.”

Meanwhile, the issue of transgender “treatments” for foster youth is not isolated to Pennsylvania, or even the United States.

In a September 30 report, The Post Millennial referenced a July 18 Twitter thread from conservative activist Chris Elston (Billboard Chris), in which Elston pointed out that British Columbia psychologist Wallace Wong admitted on video in 2019 to performing transgender procedures for more than 1,000 children — more than half of whom had been in the foster system.

Wallace Wong admits to transitioning over 1000 kids, including more than 500 in the foster system.

That’s almost 10% of all the foster kids in British Columbia.

This man is who the Ministry of Children and Family Development leans on for ‘expertise.’

Concerns regarding the special vulnerability of children to the predations of the transgender industry, particularly children from broken homes, comes as left-wing school administrators have pushed to prevent parents from knowing about their child’s alleged gender identity while politicians angle to strip custody from parents who don’t want their child to undergo social, chemical, or surgical “transition.”

Late last month, California Democratic Gov. Gavin Newsom signed legislation legally shielding parents who want to take away a child from his or her other parent in order to have him or her chemically or genitally castrated.

According to Family Policy Alliance president and CEO Craig DeRoche, by signing the measure Newsom has “awarded himself custody of every child struggling with gender dysphoria, elected himself governor of every state to thwart their own laws that might protect children from harmful & sterilizing gender ‘transitions,’ and dared the entire nation to do anything about it.”