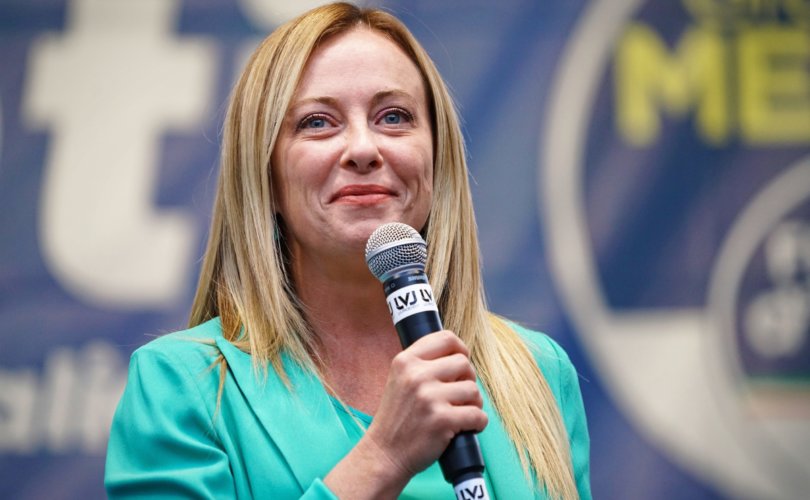 ROME (LifeSiteNews) – Leader of the Fratelli D’Italia (Brothers of Italy) conservative political party, Giorgia Meloni, won the Italian federal election on Sunday, and is set to become the first female prime minister in the country’s history.

Four years ago the Fratelli D’Italia won only four per cent of the vote, and thus have experienced a meteoric rise as Italians have become increasingly disillusioned with the left-wing handling of the nation during the COVID-19 so-called pandemic.

In Italy’s multi-party system, it is common for politicians to form alliances in order to establish a government. Meloni chose to ally herself with Matteo Salvini’s conservative party, Lega, and former Prime Minster Silvio Berlusconi’s Forza Italia.

Left-wing media outlets such as CNN and Politico are suggesting that Meloni’s victory is a “neo-fascists” victory and are comparing her government to that of former Italian fascist leader Benito Mussolini.

However, Meloni has emphatically denied any links to fascism, and has said that her party is not an atypical right-wing European political party.

A speech that Meloni gave in 2019 at the World Congress of Families is making waves on the internet, having been viewed over ten million times since she was elected.

Wow! Can’t wait to see what @GiorgiaMeloni does in Italy for the pro-life and pro-family cause! pic.twitter.com/UH64bZOFH1

“We will defend God, country and family. Those things that disgust people so much. We will do it to defend our freedom, because we will never be slaves…”