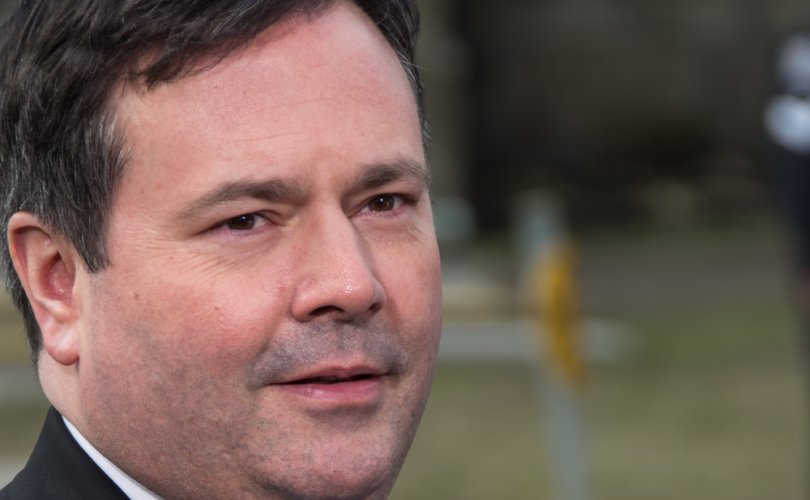 “I will be abstaining from the vote as well as most of our caucus,” Kenney told reporters at the Alberta legislature Monday, as quoted in the CBC.

“This is so obviously a transparent effort by the NDP to distract attention from its failed economic record,” he said.

“We’re not going to play games with divisive social issues. We’re here to focus on job creation and economic growth, (and) market access for energy products.”

“The NDP are not playing games. They are trampling on pro-lifers’ rights whenever they can get away with it, and shame on Kenney for not standing up for basic human rights and freedoms,” he told LifeSiteNews.

A Catholic well-known for his social conservative views, Kenney had an impeccable pro-life voting record during his 19 years as a federal MP in Stephen Harper’s Conservative government.

As UCP leader, he’s reiterated his personal pro-life convictions, but has been clear his party won’t initiate abortion legislation as government.

The UCP caucus will have a free vote on the bill, as they do on all matters of conscience, Kenney’s spokesperson Annie Dormuth told LifeSiteNews in an email.

The UCP has 25 members in the legislature to the NDP’s 54.

The penalty for a first offence is a fine of up to $5,000 and/or up to six months in jail. This doubles for second and subsequent offences. Ontario, British Columbia, Quebec, and Newfoundland and Labrador have similar “bubble zone” laws.

Kenney told the CBC the bill is unnecessary, particularly since injunctions forbidding certain pro-life activities have been in place for at least 15 years outside the abortion centers.

“The bubble zone has already been in place for 20 years and that’s why presumably until the last week the NDP has never proposed legislation where court orders have already been effected,” he said.

Campaign Life’s Gunnarson pointed out that although Kenney “said he wouldn’t open the abortion debate, bubble zones don’t affect the abortion laws in Canada. Bubble zones are an impediment to free speech which Jason proudly claims to uphold.”

The UCP leader “is siding with the abortion industry instead of siding with those of us pro-lifers and social conservatives who helped him throughout his career whether through voting, financially contributing to his campaign or volunteering,” Gunnarson said.

1
The simple reason why you should stop using Gmail
2
Tucker Carlson: Biden admin ‘may have blown up’ gas pipelines in Baltic Sea
3
Here’s how to stop Google from collecting huge amounts of your data
4
UFO and alien deception: a diabolical preparation for the Antichrist
5
Prophecy: War will break out in Europe after Pope visits Moscow
Subscribe to Daily Headlines »