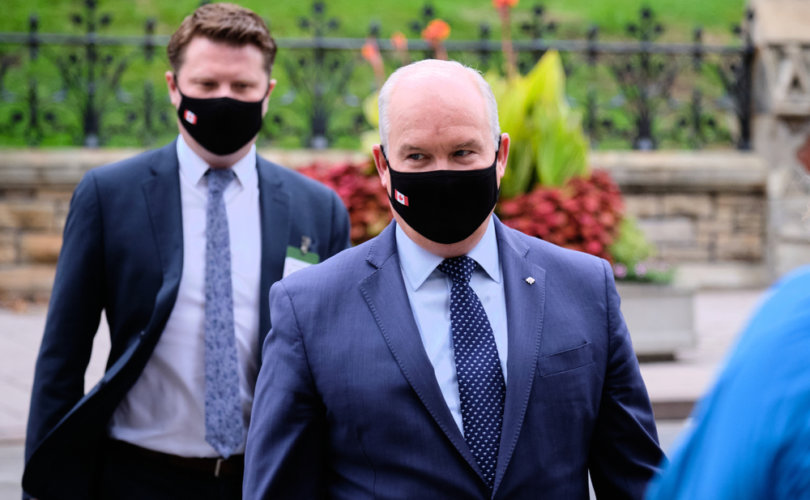 OTTAWA, Ontario  (LifeSiteNews) – Erin O’Toole, leader of the Conservative Party of Canada (CPC), now says he will meet with truckers from Freedom Convoy who are expected to arrive in Ottawa this weekend, after many high-profile CPC MPs broker ranks and voiced their unwavering support for the haulers.

“The trucker convoy is a symbol of the fatigue in our country right now. The very fact that the prime minister won’t listen or hear these voices shows the degree of division that exists in our country,” O’Toole said at a press conference in Ottawa yesterday.

“So tomorrow I will be meeting with truckers to hear their concerns, to talk about the proposals I brought three weeks ago to try and make sure we can keep grocery store shelves full, keep people working and work together.”

However, over the past few days a growing chorus of CPC MPs, including high-profile ones such as former CPC leader Andrew Scheer and CPC Deputy leader MP Candice Bergen, came out in full support of Freedom Convoy, while O’Toole stayed silent.

O’Toole had earlier in the week claimed it was not his place as an MP to meet with the Freedom Trucker 2022 convoy, which is headed his way.

He also bizarrely suggested, while staying quiet about the coming truckers and their plight, that COVID jab clinics be set up along highways for unvaccinated haulers, and that they also be provided with “educational” tools so that they would get jabbed.

O’Toole’s about-face came on the same day an internal report was released regarding his leadership of the CPC, which put much blame on him for both losing the 2021 federal election, as well as not stepping up in the last 10 days to speak out for Canadians fighting unjust COVID mandates.

During his press conference, O’Toole admitted he was “responsible for the [2021 election] loss,” and that he has failed as a leader especially “in the last 10 days,” no doubt in reference to his lack of public support for the freedom convoy.

This past Wednesday, Canadian Prime Minister Justin Trudeau called the thousands of truckers in the freedom convoy headed to Ottawa along with the millions of Canadians supporting them a “small fringe minority.”

Trudeau then said he was going into isolation for five days after claiming someone close to him tested positive for COVID, meaning as the convoy rolls into Ottawa, Trudeau will be nowhere to be found.

O’Toole said that “I’ve never seen the country more divided and I’ve never seen a time that we need to come together more than now after two years. Canadians are tired.”

“The very fact that the Prime Minister won’t listen or hear these voices shows the degree of division that exists in our country,” he added.

While the convoy has no official leader as it is a grassroots movement, the “Freedom Convoy 2022” Facebook and GoFundMe group has raised over $7.3 million in under two weeks.

Despite Trudeau’s claims the trucker convoy is a “fringe” protest, it is made up of thousands of Canadians who are “slow-rolling” to Ottawa this weekend to protest the draconian COVID jab mandates and rules imposed by Canada’s government.

Supporters of the convoy have already arrived in Ottawa ahead of the main convoy coming from the west.

Even the world’s richest man, Tesla’s Elon Musk, voiced his support for the trucker convoy in a tweet yesterday, writing, “Canadian truckers rule.”

Many not buying O’Toole’s hasty support of Freedom Convoy

Some have claimed that O’Toole’s sudden support for the freedom convoy might have been a ploy by the CPC – nothing more than fundraising tactic – as only a brief time after his Thursday press conference he released a video supporting the truckers.

“NEW LOW: Erin O’Toole just attempted to fundraise off the backs of these truckers.  Sit down you grifter,” tweeted Bexte yesterday in reference to O’Toole’s trucker video.

NEW LOW: Erin O'Toole just attempted to fundraise off the backs of these truckers. Sit down you grifter. pic.twitter.com/aVy4JDIhlf

Rebel News writer/editor Dave Shrigley wrote about O’Toole, “Erin must have got the internal poll results back, now it’s ok to meet with the truckers. Is there anything he won’t flip-flop on?”

In another tweet, Bexte said the trucker convoy is the beginning of the end for O’Toole.

This convoy may not be the end of Trudeau's political career, but it is the harbinger of the end for O'Toole. His caucus, led by @PierrePoilievre is standing with the people, and @erinotoole is off captaining his own rowboat.

Despite CPC MPs finally speaking out against mandates, through their support of the freedom truck convoy, Maxime Bernier, leader of the People’s Party of Canada (PPC) and former CPC cabinet minister, reminded people those MPs have been silent for months.

It took 22 months for a handful of Conservative MPs to finally decide that they oppose Trudeau’s fascist covid measures and support freedom. How courageous! Without the PPC there would have been no pushback whatsoever during this whole time.

Tony Cook, who was a PPC Candidate for Vancouver South in the 2021 federal election, wrote today, “Any CPC MPs jumping on the freedom bandwagon are just opportunists. @MaximeBernier and his #PPC team have been beating this drum for 2 years.”

Bernier has been the only politician in Canada who has consistently spoken out against COVID lockdowns, jab mandates, as well as other virus rules.