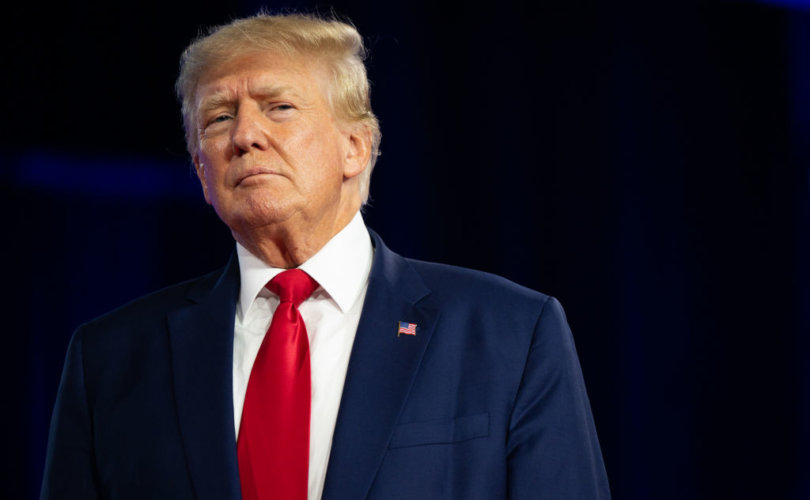 The agency was reportedly conducting a search on behalf of the National Archives over boxes of classified documents the former president was storing at his home. He said he had been cooperating with authorities on the issue of storage of the documents and he had no forewarning of the raid.

“The FBI raid on President Trump’s home is an unprecedented political weaponization of the Justice Department,” South Dakota Governor Kristi Noem wrote on Monday night. “They’ve been after President Trump as a candidate, as President, and now as a former President. Using the criminal justice system in this manner is un-American.”

The FBI raid on President Trump’s home is an unprecedented political weaponization of the Justice Department. They’ve been after President Trump as a candidate, as President, and now as a former President. Using the criminal justice system in this manner is un-American.

Florida Governor Ron DeSantis connected the raid to the planned hiring of 87,000 new Internal Revenue Service (IRS) agents as part of a massive tax and spending bill pending in Congress.

“The raid of MAL is another escalation in the weaponization of federal agencies against the Regime’s political opponents, while people like Hunter Biden get treated with kid gloves,” the Republican governor tweeted. “Now the Regime is getting another 87k IRS agents to wield against its adversaries? Banana Republic.”

The raid of MAL is another escalation in the weaponization of federal agencies against the Regime’s political opponents, while people like Hunter Biden get treated with kid gloves. Now the Regime is getting another 87k IRS agents to wield against its adversaries? Banana Republic.

“Raiding the home of your predecessor and leader of the opposition, to harass him and terrorize his supporters, is the kind of tinpot dictator garbage you don’t even see in faded European powers, only in the likes of banana republics. Biden is asleep, who’s making these decisions?” Dhillon asked.

Raiding the home of your predecessor and leader of the opposition, to harass him and terrorize his supporters, is the kind of tinpot dictator garbage you don’t even see in faded European powers, only in the likes of banana republics. Biden is asleep, who’s making these decisions?

Republican Senator Ron Johnson of Wisconsin also saw the raid as an example of political machination.

“One more example of our two-tiered system of justice. Who do you think they’ll weaponize the 87,000 IRS agents against? The answer is obvious. Their political enemies,” Johnson said, according to Daily Caller reporter Henry Rodgers.

“It’s time for us in the Florida Legislature to call an emergency legislative session & amend our laws regarding federal agencies[.] Sever all ties with DOJ immediately,” Sabatini tweeted. “Any FBI agent conducting law enforcement functions outside the purview of our State should be arrested upon sight.”

Republican Minority Leader Kevin McCarthy did not plan any immediate action but threatened a probe into the DOJ after the November election, should the GOP retake the House of Representatives. “When Republicans take back the House, we will conduct immediate oversight of this department, follow the facts, and leave no stone unturned,” McCarthy stated.

Donald Trump’s son, Eric Trump, said that the political establishment has been working against his father ever since he declared he would run for president in 2015.

“They slander him, they belittle him…they went after all of us [Trump family members],” Eric told Sean Hannity on Monday night.

“My father never got so much as a speeding ticket in his life until he made one decision:

To go down the escalator…and go actually fight for this country…” @EricTrump pic.twitter.com/79BJwqYAkT

“To have 30 FBI agents, actually more than that, descend on Mar-A-Lago, give actually no notice,” is all about trying to stop him in 2024, Eric said.

He also criticized the lack of investigation by the FBI into Hunter Biden’s potential crimes, such as firearm crimes, prostitution, illegal dugs and questionable business dealings.

Sean Davis of The Federalist also knocked the FBI and DOJ for its seemingly selective interest in crimes.

“Not a single one of Ghislaine Maxwell’s child sex-trafficking clients has been named. The FBI yawned when young girls told them [Michigan State and Olympics doctor] Larry Nassar was raping them. We all know where the American Stasi’s priorities are,” Davis tweeted.

Not a single one of Ghislaine Maxwell’s child sex-trafficking clients has been named. The FBI yawned when young girls told them Larry Nassar was raping them. We all know where the American Stasi’s priorities are. https://t.co/5HzwkMncRg

He was responding to a tweet from The Daily Wire’s Matt Walsh that pointed out a lack of investigation into the potential murder of born babies in a D.C. abortion facility.

“Several months ago, physical evidence was uncovered indicating that an abortion clinic in DC has been murdering fully developed and already born infants,” Walsh wrote. “The DOJ refused to investigate. The FBI has not conducted any raids.”

Davis’ Federalist colleague Mollie Hemingway argued the raid is about “rigging yet another election.”

Paul Sperry with RealClearPolitics pointed out potential conflicts of interest in the investigation.

Senator Majority Leader Chuck Schumer declined to comment on the investigation when asked about it on MSNBC Monday night.