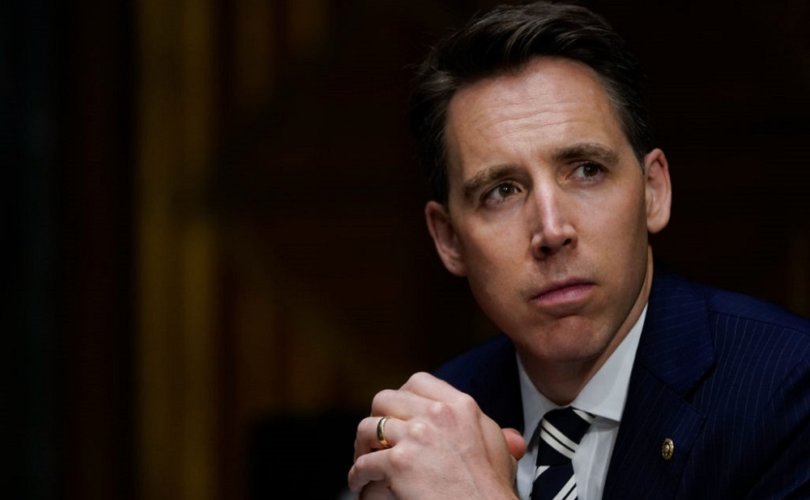 U.S. Sen. Josh Hawley of Missouri filed a three-word amendment to the National Defense Authorization Act (NDAA) that would “Strike Section 511.” The NDAA is the primary piece of legislation for the funding and policies of the Department of Defense.

Senator Jack Reed, a Rhode Island Democrat, wants to require women to register under the Selective Service System. Reed said in the summer that there is “strong support … on both sides of the aisle and I think among the American public” for requiring draft registration, according to The Hill.

“It is wrong to force our daughters, mothers, wives, and sisters to fight our wars,” Senator Hawley said in a statement. “Our country is extremely grateful for the brave women who have volunteered to serve our country with and alongside our fighting forces.”

“They have played a vital role in defending America at every point in our nation’s history,” Hawley said. “But volunteering for military service is not the same as being forced into it, and no woman should be compelled to do so.”

The U.S. House of Representatives passed a version of the NDAA in September that included mandatory registration.

Conservative Congress members have previously spoken out against the proposal.

“I cannot put into words the extent to which that idea angers me and undermines who we are as a nation and I cannot believe that House Republicans are sweeping it aside, sweeping it under the rug, refusing to talk about it while they blindly march forward saying the ‘conference’ supports passage of the NDAA,” U.S. Rep. Chip Roy of Texas said in September.

“As usual with the Swamp, the biggest scandal in the bill is the quietest one that they are trying to sneak in and hope no one notices,” Illinois Republican Mary Miller said at the same press conference. “This defense authorization, for the first time in our history, would require teenage girls to register for the draft. No one knows about this because the Democrats have convinced the media that gender no longer exists so this isn’t a big deal.”

Pro-family groups have also come out against the legislation.

“American women are free to serve and proud to serve, but they should not be forced to serve,” Concerned Women for America (CWA) said in a fact sheet. “Young women today should be respected for their intrinsic value and the many essential roles women embrace in all seasons of life as workers, wives, mothers, and caregivers.”

“The Selective Service System is not a social experiment,” CWA continued. “American women do not need to be conscripted to fight on the front line of war to prove their worth. Enduring differences between the sexes have everything to do with military readiness and national security in wartime.”

A former military officer wrote a blog for the Institute for Family Studies about why Americans should oppose drafting women.

The language of inclusivity may scratch the popular itch of equality for all, but it is a bad idea for American families,” Frances Burke wrote. She defended the important and unique role women play in the family.

“Why are Senate Democrats and surely others in the government trying to erase the important roles women play in the family?” Burke asked. “Why is it so hard to admit that women fulfill vital — but different — roles in the family unit and should not be subjected to the draft?”

“It is likely that war will come again and the draft with it. We should plan for that reality and stand against Senator Reed’s plan,” Burke said.