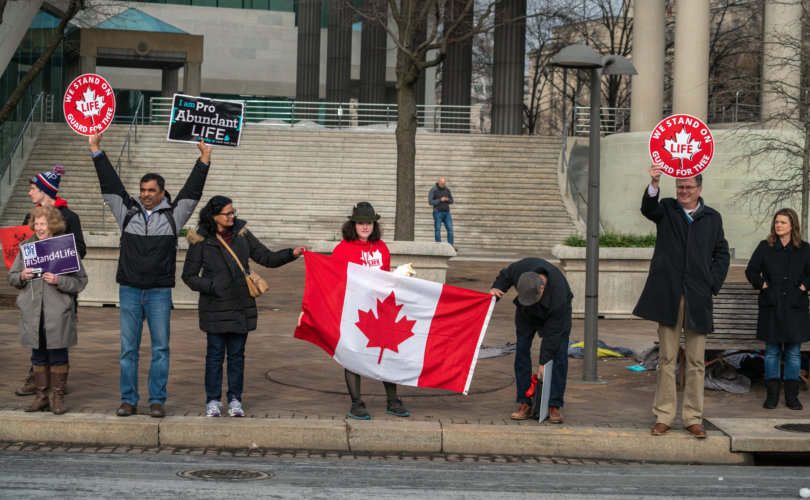 OTTAWA (LifeSiteNews) – Conservative Party of Canada MP and leadership candidate Dr. Leslyn Lewis would allow as prime minister for an “open” debate regarding life issues in Canada, saying the party needs to  “take control of the conversation.”

Lewis made the comments in response to Roe v. Wade being overturned by the U.S. Supreme Court last Friday.

In a platform update posted to her website last Friday, Lewis wrote that “with the U.S. Supreme Court striking down Roe v Wade today, it does not take a soothsayer to know how the (Trudeau) Liberals will run in the next election. It will be all about abortion.”

“We have a choice. We can try what our party has done in the last several elections and run from the issue, letting the Liberals set the agenda, or we can be the voice of unity and take control of the conversation,” Lewis wrote.

“One way or another, this conversation is going to happen, and our party can choose to respectfully set the tone, or we can let ourselves be hapless bystanders once again. I am ready for this conversation.”

Lewis is the only pro-life candidate in the running for leadership of the Conservative Party and has been firm in her opposition to unrestricted abortion.

In a platform update, Lewis wrote that although she is hearing from Canadians on “both sides that they are uncomfortable with this new state of abortion law in the United States,” what she finds peculiar is that “striking down Roe v Wade now makes the United States a mirror of Canada, where we have no law on abortion.”

“I’m still trying to understand why is it that looking in a mirror at ourselves is cause for such concern? Could it be because what we are seeing in the United States is actually what happens when two sides of an issue never have conversations to find common ground,” Lewis wrote.

Lewis blasted the Liberal Party under Trudeau for using abortion as an issue to “divide Canadians.”

“Any discussion about finding common ground was shortsightedly dismissed as anti-women. So now we are faced with asking the real question: Do we want to be like the United States by continuing to not discuss what policies we could agree on,” Lewis wrote.

“I agree that we shouldn’t bring U.S. politics to Canada. But that means we need to have a respectful, adult discussion about all important issues and have honest discussions with fellow Canadians. Yes, even Canadians we disagree with.”

Lewis reiterated her pro-life policies of ending sex-selective abortion, which she called a “misogynistic practice of preferring baby boys over girls,” as well as banning coerced abortions, supporting pregnancy care centres, and directing overseas funding to support mothers and children rather than fund abortions.

“I have put these forward because these are the policies that bring all my friends together, both pro-choice and pro-life,” Lewis wrote.

“Our party can decide whether we want to keep running from the Liberals or whether we are actually going to be a big-tent party of unity that can welcome all Canadians into our fold, allowing healthy discussions and productive conversations to take place.”

In a monumental decision in favor of life this past Friday, the U.S. Supreme Court issued its long-anticipated ruling in Dobbs v. Jackson Women’s Health Organization, overturning Roe v. Wade.

“The Constitution makes no reference to abortion, and no such right is implicitly protected by any constitutional provision,” the court ruled.

Laws concerning abortion are now the sole making of each U.S. state.

In May, on the day before thousands of Canadians defended life in the nation’s capital at the 2022 March for Life, Trudeau’s government announced millions of dollars in funding to pro-abortion groups.

Abortion was decriminalized in Canada in 1969 when then Prime Minister Pierre Trudeau (Justin Trudeau’s father) passed a heavily criticized Omnibus Bill that amended the criminal code to allow abortions to be done in hospitals under permissive circumstances.

The court encouraged the Canadian Parliament to come up with replacement abortion legislation. This effort failed when then-Prime Minister Brian Mulroney’s draft law was dismissed in a Senate tie vote. The result of this is that, since then, abortion is permitted in Canada through all nine months of pregnancy.

Lewis has a “green light” rating from Campaign Life Coalition as a fully supportable pro-life candidate.