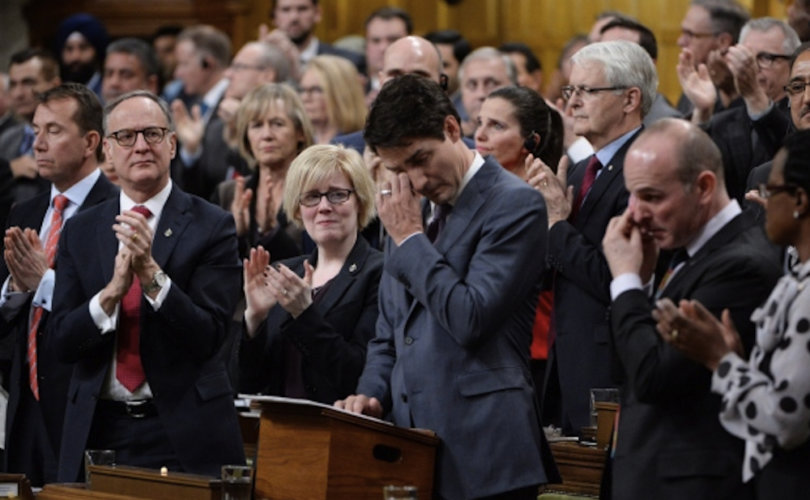 Justin Trudeau's tearful apology at the House of CommonsYouTube

Harold Albrecht and Ted Falk were among a handful of Conservative MPs present in the House of Commons who did not join the standing ovations for the prime minister during and after his 20-minute apology.

Albrecht told the Canadian Press on Wednesday that he didn’t rise because he disagreed with Trudeau’s evident support of prepubescent children identifying as homosexual or transgender.

“It went beyond an apology,” the Ontario MP said.

“When you start talking about six-year-olds, in that context, I’m not there.”

Trudeau addressed children toward the conclusion of his emotional address, and with his son Xavier and daughter Ella-Grace sitting in the public gallery.

“To the kids who are listening at home and who fear rejection because of their sexual orientation or their gender identity and expression, and to those who are nervous and scared, but also excited at what their future might hold — we are all worthy of love, and deserving of respect,” Trudeau said.

Added Trudeau: “To members of the LGBTQ2 communities, young and old, here in Canada and around the world, you are loved and we support you.”

“I firmly believe in the apology and I stand behind the apology,” he told the Canadian Press.

“I think some of the statements went further than that.”

LifeSiteNews was not able to reach Albrecht or Falk for further comment before deadline.

Conservative leader Andrew Scheer, however, found no fault with Trudeau’s apology, supporting it in the House on Tuesday.

He also urged Canada to promote rights of LGBTQ2 persons in countries where they face torture and death for their homosexuality.

Scheer told the Canadian Press on Wednesday that he spoke on behalf of the Tory caucus, and didn’t want to politicize the issue.

“I touched upon the injustice that was done to members of the LGBTQ2 community and acknowledged that this was a dark chapter in Canada's history,” said Scheer, a Catholic father of five with a pro-life voting record, including a vote against the Liberal transgender “rights” Bill C-16.

The Tory leader’s support signals a “consensus among the major national parties on the need to protect the rights of sexual minorities,” opined Ibbitson.

There were 20 Conservatives missing from the House for Trudeau’s apology, he noted.

“Some of the absentees were on government business, such as Lisa Raitt, Erin O'Toole and Garnett Genuis, none of whom could be classed as social conservatives,” Ibbitson wrote.

“On the big issues, consensus rules, as Mr. Scheer demonstrated on Tuesday.”

“No one supports unjust discrimination towards LGBTQ individuals. But the Liberals are actively pushing a homosexual and transgender ideology in schools, communities, and the workplace,” he told LifeSiteNews.

“It’s ironic, because Pierre Elliott Trudeau said, ‘The state has no place in the bedrooms of the nation,’ now here’s Justin using state power to push a sexual ideology, and one directly contrary to the moral codes of Christians, Muslims and Orthodox Jews,” said Gunnarson.

“I suspect a lot of people, including MPs, don’t agree with his full court press on the LGBTQ agenda, but they just don’t want to say so.”

Tory MPs Albrecht and Falk should be commended for “calling Trudeau out on this,” added Gunnarson.

“I hope other MPs have the courage to do the same, as well as all Canadians, and particularly parents, who oppose the LGBTQ agenda.”