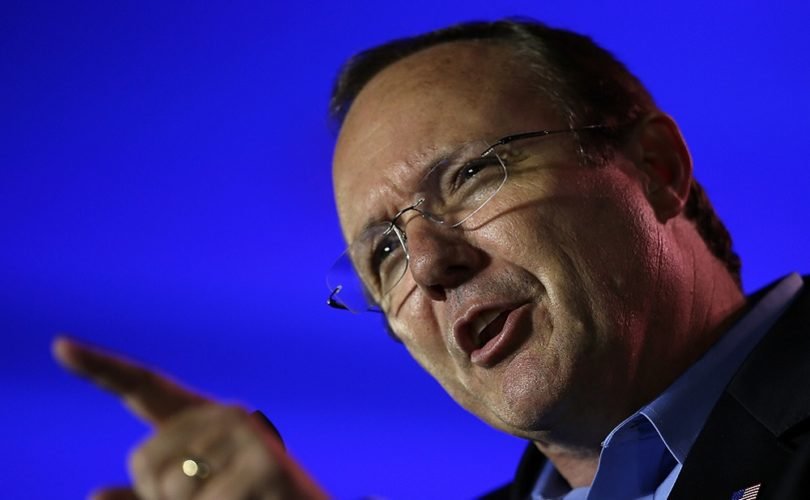 “It is my pleasure to be among the many solid conservatives who are supporting Col. Maness' candidacy for the United States Senate in the state of Louisiana,” said Focus on the Family founder and leading social conservative Dr. James Dobson in a statement released with his Thursday endorsement. “In an age where so many in Washington, D.C. are constantly trampling on religious liberty and the biblical values our nation was founded upon, it's imperative that we send a committed Christian conservative warrior to fight for us in the United States Senate. In the upcoming race for U.S. Senate in Louisiana, I believe that man is Col. Rob Maness.”

Maness, whose campaign has garnered numerous endorsements from Tea Party and other conservative groups, is running an uphill fight against two sitting members of Congress and the state's treasurer. He ran an aborted campaign in 2014 for the GOP nomination to unseat incumbent Senator Mary Landrieu, a Democrat.

A February poll, one of the few done of the race so far, showed Maness with 6.9 percent support. He is trailing state Treasurer John Kennedy, who garnered 22.1 percent support. In second is Rep. Charles Boustany, chairman of the powerful House Ways and Means Committee's Tax Policy Subcommittee, who saw 10.2 percent of poll respondents back him. Public Service Commissioner Scott Angelle, who has since decided to forego running for the Senate seat and instead run for Boustany's open seat, placed third at 9.7 percent support. Dr. John Fleming, a leading social conservative on Capitol Hill and the other Member of Congress running for the open Senate seat, receive support from 5.5 percent of poll respondents.

Unlike most states, Louisiana's primary will take place on November 8 — the same day the rest of the country votes for president. Known as a “jungle primary,” if one candidate does not gain 50 percent of the vote, the top two candidates will go to a runoff election.

Maness had the lowest unfavorable ratings among those polled — but of the four top Republican candidates, he also had the second-lowest name recognition. Only Fleming was lower.

Kennedy, Boustany, and Fleming come into the race with large war chests, according to Southern Political Report Magazine. Kennedy has three million dollars, Boustany has $1.5 million, and Fleming has $2.3 million.

According to Dobson, “Col. Maness has spent his entire life fighting for our country and I believe he will continue to do so as a United States Senator. He is unapologetically pro-life, understands that only traditional marriage is compatible with natural law and is a passionate defender of religious liberty.”

In 2013, Maness wrote an op-ed for The Washington Times citing America's religious and spiritual traditions in an effort to support religious liberty in the military.

In a statement to LifeSiteNews, Maness said, “One of the biggest factors that originally led me to entering the political arena was my concern that religious liberty was not being protected in our nation's armed forces. Having spent 32 years in the United States Air Force, I saw firsthand how the freedom to worship was being severely restricted in the military.”

“I remember when I first deployed to Saudi Arabia for Desert Storm in the early 1990s, military commanders were told to order military chaplains to remove the crosses from their uniforms. This gross mistreatment only got worst as my career in the military went on, as by the time I retired in 2011, the chief of staff of the Air Force gave a direct order that all commanders could no longer discuss religion or spirituality in public. As a United States senator, I will make it one of my chief missions to not only protect religious liberty and the freedom to worship for all Americans, but specifically for those serving in our military. The right to worship as one chooses should never be infringed upon and will be something I plan to continually spotlight should I be elected.”

“As a Pastor who is deeply concerned about the moral and spiritual direction of our nation,” Gunter wrote, “I am pleased to serve as Chairman of the Pastor's Committee for Col. Rob Maness' U.S. Senate campaign. Col. Maness understands the critical and decisive role that the U.S. Senate will have in determining the trajectory of the Supreme Court for generations to come. I'm endorsing Col. Maness because Christian values and religious liberty are under relentless assault in our culture, and I am convinced that he will fight to restore our biblical values and to uphold our most precious freedoms.”

This morning, Maness's campaign rolled out another top endorsement: GOP strategist and commentator Mary Matalin, who endorsed Maness in 2014. “I'm once again endorsing Col. Rob Maness for U.S. Senate because of his character, integrity and deeply held commitment to constitutional principles and for bravely serving his country,” said Matalin, a Louisiana resident and regular on the TV circuit.

“Col. Maness represents common-sense Louisiana values. The Colonel will bring a much needed vision to our nation's capital. He will fight for all Louisianans with the same courage and commitment he has devoted to his military career. I'm confident that he will be the conservative champion the people of Louisiana need standing up for their values, principles and policies in the United States Senate. Col. Maness is a candidate I'm looking forward to voting for.”

Despite gaining the support of Dobson, Gunter, and Matalin – as well as the support of the state's top elected Republican, Lt. Governor Billy Nungesser – Maness doesn't have a monopoly on influential endorsements. Family Research Council Action president Tony Perkins is standing behind Fleming, who co-chairs the House of Representatives' Values Action Team and co-founded the conservative House Freedom Caucus.

“During your time in Congress, you have not only been a consistent pro-family, pro-freedom vote; you've been a leader that has actually fought for the values that made this country the envy of the world,” said Perkins in his endorsement of Fleming. “In today's environment, it's difficult to find candidates who have a proven record to match their conservative rhetoric. You not only talk about conservative ideals; you have successfully fought for them. We have worked together on numerous occasions to impact legislation ranging from protecting the unborn to defending natural marriage to forcing the Pentagon to respect the religious liberties of our men and women in uniform.”

“Through your conservative and principled leadership, we have actually succeeded on important measures in a less than favorable environment,” said Perkins.

Fleming has also been backed by leading conservative Rep. Jim Jordan, R-OH, and the Concerned Women PAC. “Americans are concerned about our country, their future, and the security of our nation,” said Penny Nance, CEO of the PAC. “As a member of Congress, Dr. Fleming has proven himself willing to stand and fight for life issues, protection of the 2nd amendment, religious liberty, national security, protecting jobs for people at home, and growing our economy. We are proud to endorse Dr. Fleming because he does more than just get a great scorecard with us; he rolls up his sleeves and is actually involved in the issues our members care deeply about.”

According to Dobson, Maness “doesn't plan on being just another 'good vote' for Christian conservatives in Washington; he is committed to being a vocal spokesman and fighter for our cause. I urge all Christians living in Louisiana to support this God-fearing American patriot in the race for U.S. Senate.”