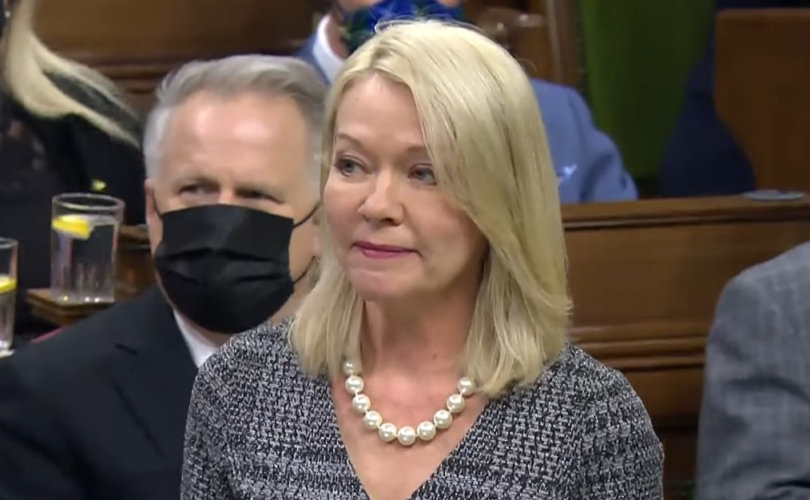 Bergen said in her statement, “It would be inappropriate to comment on matters before the US Courts. That is why Conservatives will not be commenting on the leaked opinions from the Supreme Court of the United States.”

“When it comes to the debate in Canada, Conservatives’ position remains what it has been since the Harper government. Access to abortion was not restricted under Prime Minister Stephen Harper, and the Conservative Party will not introduce legislation or reopen the abortion debate. The only ones reopening this debate are the Liberals, and Justin Trudeau is once again using women’s reproductive rights to wedge and divide Canadians.”

Bergen’s statement and muzzling of her MPs came a day after the leaked draft opinion from U.S. Supreme Court Justice Alito went public, indicating that a majority of the court would be looking to overturn the nearly 50-year-old pro-abortion Roe v. Wade decision.

Yesterday, the U.S. Supreme Court confirmed the authenticity of the leak but said it does not reflect the court’s final decision.

Yesterday, Canadian Prime Minister Justin Trudeau on Twitter publicly voiced his support for abortion-on-demand, in light of the court leak. Many other Liberal Party MPs did so as well.

Bergen said that if Trudeau “wants to reopen the abortion debate in the House of Commons, Conservatives will represent Canadians, and as we have in the past, allow Members of Parliament a free vote on matters of conscience.”

The CPC policy declaration states that a “Conservative Government will not support any legislation to regulate abortion (70).”

It also reads that all MPs have free votes on “issues of moral conscience, such as abortion, the definition of marriage, and euthanasia.”

Yesterday, it was reported by the Canadian Press that Bergen told her MPs in a one–sentence memo they were to avoid making comments regarding Alito’s draft opinion.

Despite this, some MPs, including high-profile ones, took to Twitter yesterday to give their thoughts.

“To my two American step-daughters, your father and I firmly support you in fighting for your equality and right to safely manage your reproductive health. We love you so much. I will always, and have always, fought for the same for the women I represent in Canada,” wrote Rempel Garner.

“While respecting the sincere convictions of others, I am proud to be one of the MPs who believes in the immutable dignity of the human person, regardless of gender, age, level of development, sexual orientation, disability, or any other characteristic. #humanrights #cdnpoli,” tweeted Genuis.

Currently, the CPC is in the middle of a leadership race. A total of six candidates are moving on to the next stage, and the CPC will announce its new leader on September 10.

“I will always defend a woman’s right to choose. Any efforts to restrict access to abortion would have terrible consequences for the health of women, families, and our country,” said Aitchison.

Former Quebec Premier Jean Charest, who is also a leadership candidate, reaffirmed yesterday on Twitter that he is “pro-choice.”

While Lewis has been quiet thus far regarding Alito’s draft opinion, she recently released two major platform updates, the first confirming her pro-life policies and the second reaffirming her opposition to COVID shot mandates.

CLC gives  Lewis a “green light” rating as a “supportable” pro-life candidate for her strong voting record in favor of life.

CPC leadership candidate Roman Baber also took to Twitter to give his take on the Roe v. Wade draft leak.

Baber, who is currently an independent Ontario MPP, said he doesn’t “believe gov’t has a role in how people start or grow their families.”

Yesterday, a motion tabled by the Bloc Quebecois in Canada’s House of Commons which sought unanimous consent to establish a woman’s “free choice” to have an abortion failed to gain traction.

The reason for the motion not proceeding was reportedly Bergen telling her MPs to stay quiet on the Alito draft opinion.

Recently, Trudeau promised to strip pregnancy resource centers of their charitable status because they choose to promote life instead of abortion.

CLC national president Jeff Gunnarson said in a recent email that the potential overturning of Roe v. Wade for Canada means “pro-life advocates in Canada are now encouraged to work even harder to bring legal protection to children in the womb from conception onward.”

“Abortion in Canada still persists in a legal vacuum to this day, leaving the preborn with no legal protection,” said Gunnarson.

On May 12, thousands of Canadians will travel to Ottawa for the National March for Life, organized by CLC. Details can be found at marchforlife.ca.