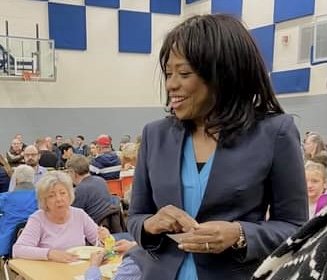 OTTAWA (LifeSiteNews) — Conservative MP and leadership contender Leslyn Lewis again blasted a Canadian federal travel ban by air, rail or sea for those who do not have the COVID injections, this time saying such a dictate is “segregation” and not at all “science” based.

“But if we all went to the airport and we decided that we’re going to get on a plane, some people in this room could get on and some people can’t. And that’s not science. That’s segregation. And so that’s why I oppose those things.”

Lewis said that one has to be “courageous at some point and know that when you’re standing up for what’s right that you continue.”

“I’m so happy now that a few individuals like myself and a few others were courageous enough to stand up, and now others feel that courage because courage is contagious,” Lewis added.

“I believe in personal responsibility, but I don’t believe in segregation.”

Lewis posted a video clip of her comments made April 12 in Kelowna over the Easter weekend, saying, “While millions of Canadians were kept from spending the Easter weekend with their families due to the federal travel mandates, I am encouraged by the rising movement to bring back equality for all Canadians. Courage is contagious!”

Lewis for some time has called out a travel ban on the vaccine free imposed by the federal government of Prime Minister Justin Trudeau, as well as other COVID mandates.

As it stands now, Canadians who have chosen of their own free will to not get the COVID jabs are banned from leaving Canada by air, rail, or sea.

Lewis was the first candidate to officially get her name on the ballot to run for leader of the Conservative Party of Canada (CPC), which will hold its leadership vote on September 10.

To date, more than 10 candidates have put forth their names in the race.

CPC MP Pierre Poilievre is considered by many to be the frontrunner. He has also has spoken out against the Trudeau travel ban on the vaccine free.

Today is the deadline for candidates to submit their first paperwork to enter the race. By April 29, they must hand in their nomination papers with 500 signatures from party members along with the $300,000 fee.

Lewis remarked that should she win the nomination to run the CPC, her “bill protecting parental rights” would ensure that families remain safe places for all topics of conversation.

Campaign Life Coalition gives Lewis a “green-light” rating as a “supportable” pro-life candidate for her strong voting record in favor of life.