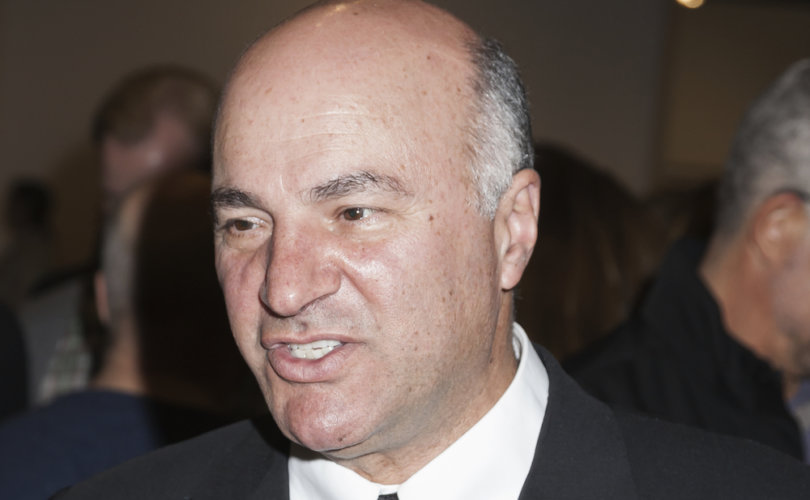 TORONTO, January 19, 2017 (LifeSiteNews) — Canada's Conservative Party has not been friendly to its social conservative wing. But the latest candidate to announce a run for the party leadership takes social liberalism to a whole new level.

Business tycoon and TV personality Kevin O’Leary, who announced his leadership bid Wednesday, infamously declared that he didn’t care if “you want to marry a goat.”

In an interview with The Rebel’s Ezra Levant during last May’s Tory policy convention, O’Leary dismissed traditional marriage, then the subject of heated debate on the convention floor.

That debate ended with delegates ditching a long-standing party policy defining marriage as between one man and one woman.

“Anything to do with the happiness of individuals, the state has no right to be in your bedroom,” O’Leary told Levant. “I don’t care if you want to marry a goat. I am for it. I really am.”

O’Leary, an author and investor, has gained fame as a judge on the CBC show Dragons’ Den and on ABC's Shark Tank.

Campaign Life Coalition political strategist Jack Fonseca says that if O’Leary wins the leadership race it would be a “kiss of death.”

“The man is a huge social liberal,” Fonseca told LifeSiteNews in an email.

“In his own words, he has described himself as ‘very liberal’ on social issues, which it’s reasonable to understand as meaning that he loves abortion and euthanasia and supports the anti-Christian, anti-family gay agenda.”

The remarks to Levant were “a slap in the face to social conservative members of the party, who represented around 40 percent of the delegates at that convention,” Fonseca told LifeSiteNews.

O’Leary also asserted then that, as well as being pro-bestiality, he endorsed the legalization of marijuana and is pro-euthanasia.

“We must have it in Canada. It is a compassionate way for families to make peace with elders out of respect for them,” he told Levant.

Fonseca fears O’Leary’s “extreme liberalism would eventually demoralize the party’s base, causing conservative activists and donors to give up on the party.”

O’Leary’s election as leader “could so thoroughly gut the party” it would lead to “another Justin Trudeau Liberal government in 2019” and even beyond, he warns.

In a statement announcing his candidacy, O’Leary boasted of his business acumen, claiming Canadians need a pro-business prime minister who can revive the economy.

He implied he was similar to U.S. President-elect Donald Trump and could protect Canada’s interests against a Trump administration.

“Now, with the election of Donald Trump to our south, Canada’s largest trading partner is headed by a businessman with an aggressive strategy that could hurt the Canadian economy,” O’Leary stated.

“Trudeau doesn’t stand a chance, and we deserve better.”

He claimed Canadians “also want a prime minister who will be inclusive and not lower themselves to use divisive politics.”

O’Leary, who is not fluent in French, declared his candidacy one day after the first French-language leadership debate in Quebec City, in which all candidates took part.

His entry makes 14 candidates in the Conservative race.

Fonseca urged pro-life and pro-family advocates to “seize this rare and golden opportunity to elect a pro-life, pro-family leader of the Conservative Party, and hopefully, prime minister.”

For information on signing up to support Trost or Lemieux, go here.