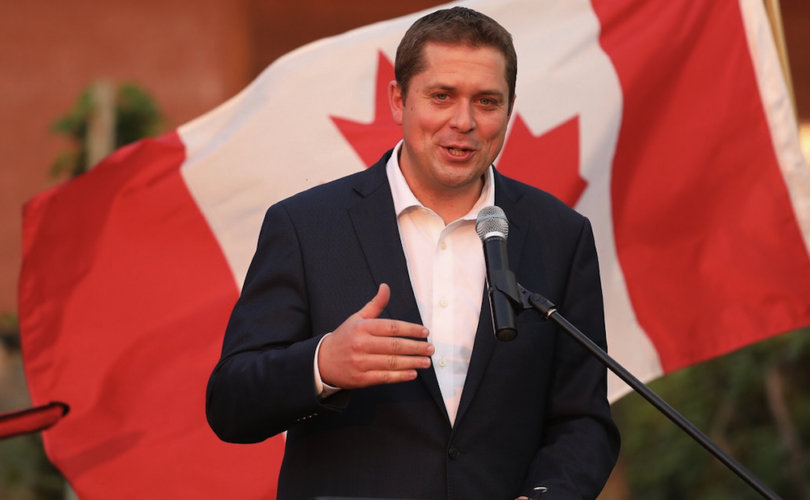 HALIFAX, Nova Scotia, August 22, 2018 (LifeSiteNews) —Abortion, euthanasia, free speech, and gender identity are all up for debate this weekend as 3,000 Conservative Party of Canada delegates meet in Halifax.

During the party’s first policy convention under leader Andrew Scheer, and the last before Canada’s 2019 federal election, delegates will accept or reject 74 proposed policies, about a dozen of which are pro-life, pro-family, or pro-free speech.

Four of these strengthen the Conservative Party’s opposition to abortion, and two restrict euthanasia.

Another calls for the Conservative Party to “defund universities that don't protect free speech, repeal gender identity laws that compel us to utter made up pronouns.”

“As far as Campaign Life is concerned, the number one most important policy to pass is deleting Article 65, which says the Conservative Party will not support legislation on abortion,” Fonseca told LifeSiteNews.

Indeed, there are two resolutions to nix Article 65, but one adds that the Conservative Party “recognizes that it is a perfectly valid legislative objective to protect the life of the unborn child.”

While the latter is preferable, “either one is a good result, so that’s our top prize for this convention,” Fonseca said.

Campaign Life Coalition’s other top goal is to pass a two-part free-speech policy to withhold federal grants to universities that don’t defend free speech, and repeal “gender identity” legislation “which compels Canadians to utter made-up pronouns like ‘ze’ and ‘zir.’”

Passing that policy is “extremely important, given the totalitarian threat that gender identity laws present to Canadians and to our free speech, and the increasing censorship on university campuses,” Fonseca said.

“So if we accomplish nothing but to pass those two policies, we’d be really happy.”

Other proposed pro-life policies include: supporting a born-alive infant protection law; excluding abortion funding from foreign aid programs; opposing the extension of euthanasia to minors or for psychological illness only; and supporting a national palliative care strategy that excludes euthanasia.

Other hot-button issues sure to stir debate during in the three-day convention that begins Thursday are scrapping supply management and nailing down Conservative immigration policy.

Delegates will winnow all proposals down to a maximum of 10 each from three breakout sessions Friday, with policies ordered according to votes they received before the convention.

Policies must receive 80 percent support to advance, and if more than 10 do so, they will be rated according to support. The sessions stop after three hours whether all policies have been addressed or not, as reported in CTV News.

Delegates can move between breakout sessions to vote on their preferred issues as these come up.

Delegates will vote on the maximum 30 successful resolutions, using the same process, in Saturday’s plenary session.

However, even if a policy is adopted, Scheer is not obliged to make it part of the Conservatives’ 2019 election platform.

Most of the 97 Conservative MPs and their staff are expected to attend the convention, including Maxime Bernier, seen by some as going somewhat rogue after recent controversial tweets, CTV reported.

The caucus will have a closed-door meeting Friday morning.

Campaign Life is also supporting a number of proposed changes to the party’s constitution, including those giving the grassroots a greater say.

“Based on our calculations over the years, and based on different analyses, we can safely say that social conservatives tend to represent between 40 to 70 percent of delegates at these Conservative conventions,” he told LifeSiteNews.

“The party establishment is slowly starting to understand that they cannot keep us down forever, that we deserve an equal seat at the table, and the practice of shutting us out can no longer be tolerated.”