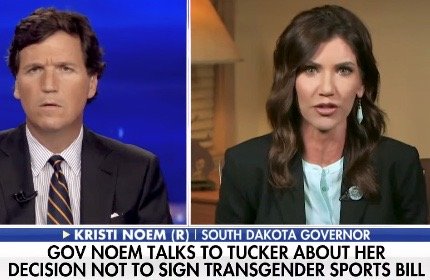 Fox News' host Tucker Carlson grills South Dakota Gov. Kristi Noem on her refusal to support a bill protecting girls and women from having to compete against biological males in athletics.

“You have a democratic process that arose from your own citizens,” Fox News’ Tucker Carlson told the Noem on Monday night.
“They want this bill, and you’ve stopped it.”

Joy Pullman of The Federalist accused Noem of “rolling over to leftists in the culture war,” cowardice and deception.

“South Dakota Gov. Kristi Noem has rightly made a national name for herself courageously standing, almost alone, for science, sanity, and constitutional rights during the COVID panic,” Pullman wrote.

“Yet it appears she’s hoping to use the goodwill she earned through this courage to hide her cowardly and deceptive choices about transgender politics.”

“Until this week, a lot of people believed Governor Kristi Noem (R-S.D.) was built in Trump's same mold: fearless in the face of controversy,” it wrote.

“So imagine everyone's disappointment when the woman who promised to sign an enormously popular bill buckled at the first sign of opposition,” it continued.

“Maybe, as some have said, Governor Noem fell prey to bad advice. Or maybe she believed that all of the goodwill she'd built up during South Dakota's COVID revolt would protect her. Whatever her reasons, the damage to her credibility by not defending girls' sports has been done. And no amount of media tours or Title IX pep rallies will fix it.”

On March 8, the South Dakota Senate passed the Women’s Fairness in Sports bill. House Bill 1217, sponsored by Rep. Rhonda Milstead and Senator Maggie Sutton, would have ensured that biological males did not compete against biological females in girls’ and women’s school and collegiate sports in South Dakota. Gov. Noem tweeted her response to the 20-15 victory that same day, saying she was “excited” that she would be signing it into law.

However, Noem didn’t sign the bill after all. Instead, she returned it to the South Dakota Legislature with “Style and Form suggestions” that robbed the bill of protections for female collegiate athletes.

“Unfortunately, as I have studied this legislation and conferred with legal experts over the past several days, I have become concerned that this bill’s vague and overly broad language could have significant unintended consequences,” the governor wrote in a March 19 press release.

Most seriously, Noem expressed her concerns that her state’s female college athletes would not be allowed to compete on the national level if South Dakota’s standards for women’s collegiate sports differed from the national norm.

“South Dakota has shown that our student-athletes can compete with anyone in the country, but competing on the national stage means compliance with the national governing bodies that oversee collegiate athletics,” she stated.

“While I certainly do not always agree with the actions these sanctioning bodies take, I understand that collegiate athletics requires such a system – a 50-state patchwork is not workable.”

The governor’s proposed changes removed the bill’s protection of the rights of South Dakota’s female college athletes not to have to compete with biological males.

On Monday, Carlson grilled the governor on her refusal to sign the bill, and she cast the National Collegiate Athletic Association (NCAA) as the enemy of women’s sports in South Dakota.

“If we put the collegiate athletics on there, then we will get punitively challenged by the NCAA and then we’ll have to continue to fight them in a court district that is not friendly to winning,” Noem said, and underscored that legal experts told her that she could not win this fight in court.

But Pullman accused Noem of misleading Carlson’s viewers about the crushing opposition she would get from the NCAA.

“It is deliberately misleading to assert the NCAA would retaliate for this bill’s passage when states including Idaho and Mississippi have passed similar laws and their college women still play NCAA sports,” Pullman wrote.

“As (The Federalist’s Margot) Cleveland explained, Noem is attempting to make the public believe that the NCAA requires participating sports teams to allow transgender athletes, when this is false.”

“Nothing in NCAA policy is an obstacle to this bill, despite Noem’s attempts to portray otherwise. If the NCAA threatened her with legal action, she should show the receipts, and NCAA should be pressed to account for why they threatened South Dakota but not Idaho or Mississippi with legal action — not mean press releases, legal action.”

Now not only Noem but her advisers are under scrutiny by conservatives. Mollie Hemingway of The Federalist alerted readers that at least one of Noem’s legal advisers has a conflict of interest when it comes to collegiate sports.

Lawmakers worried about conflict of interest,” she continued.

“Noem's chief of staff, Tony Venhuizen, is on the board of the Sioux Falls Chamber of Commerce, another group opposed to protecting women's sports.”

Meanwhile, Noem announced the creation of the “’Defend Title IX Now’ Coalition,” saying it should help protect other states from punishment from the NCAA.

“Today, we’re announcing a coalition of athletes, leaders, and anyone who cares about defending fairness in women’s sports,” the governor said in a March 22 press release.

“Once we have enough states on board – a coalition large enough where the NCAA could not possibly punish us all – then we will be able to guarantee fairness at the collegiate level.”