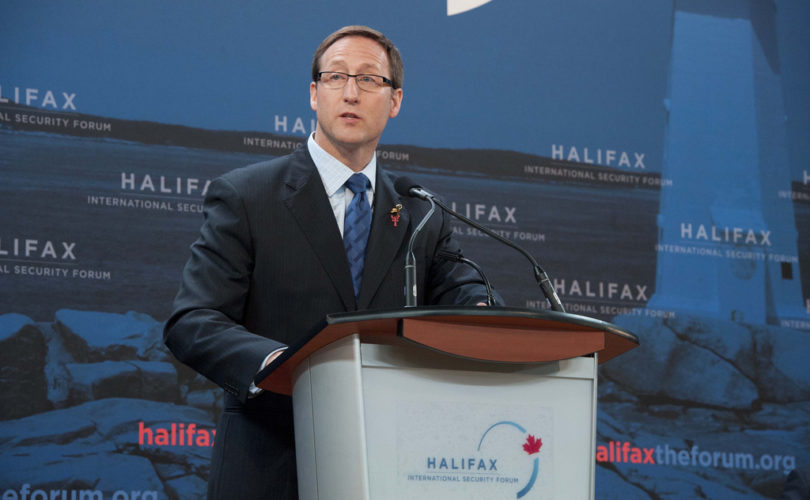 “The government does not accept the proposition that prostitution is inevitable,” said MacKay on Monday. (Photo: MacKay at the Halifax International Security Forum in 2011)Erin A. Kirk-Cuomo/Flickr

Federal Justice Minister Peter MacKay has said he hopes his newly proposed bill C-36 will eventually abolish prostitution in Canada, an aspiration that is earning him the praise of prominent women’s advocates, and the scorn of some leftist activists.

“The government does not accept the proposition that prostitution is inevitable and therefore we must decriminalize and regulate,” said MacKay during the first session of Justice committee hearings into the government’s proposed bill on Monday. “This is not the position. On the contrary, the government maintains that prostitution’s inherent harms and dangers would only grow and be exacerbated in a regime that perpetrates and condones the exploitation of vulnerable individuals through legalized prostitution.”

“Accordingly,” MacKay continued, “bill C-36 does not cease to allow or facilitate the practice of prostitution. To the contrary, its goal is to reduce the demand for prostitution with a view to discouraging entry into it, deterring participation in it, and ultimately abolishing it, to the extent possible.”

The Protection of Communities and Exploited Persons Act (bill C-36) seeks to overhaul the Criminal Code’s treatment of prostitution after the Supreme Court struck down the country’s former prostitution laws in 2013 with Bedford v. Canada, saying they violated the Charter right to security of the person.

The court gave the government one year to pass a new law before the ruling came into effect.

Bill C-36 targets purchasers of sexual services with fines and prison and criminalizes those who benefit financially from the exploitation of prostitutes. While selling sexual services would not be criminal per se, the law would prohibit prostitutes from operating in public places where a child, eighteen years or younger, is likely to be present, such as malls, recreation centers, parks, religious institutions, and residential streets.

The government pledged to support the measure with $20 million in new funding, part of which will go to help the “most vulnerable,” those who want to exit prostitution.

MacKay said on Monday during the hearing that he is convinced the new law is Charter compliant and that it respects the conditions laid down by the Supreme Court in Bedford. He admitted that the bill is likely to be challenged in court if it passes in the House, but said he believes it will ultimately survive any constitutional challenges.

Leading advocates for prostituted women welcomed the bill as a step in the right direction.

During the second session of meetings on Tuesday, Megan Walker of the London Abused Women’s Centre told the Justice committee that just because something like prostitution has been around for a long time does not mean that nothing can be done to stop it.

“I’ve heard over the last couple of days here — today and yesterday — and also in the past that prostitution has always been around. I’d like to address that because so has domestic violence, rape, harassment, stalking and even murder. But we don’t just say: ‘Well, these things have always been here and as a result we’re just going to throw up our hands and do nothing about them.’ In fact we work to change these scenarios for vulnerable people,” she said.

Tania Fiolleau, who was herself prostituted before becoming a Madam who ran four brothels employing over 500 girls, told LifeSiteNews that she supports MacKay’s bill and its goal of eventually eliminating prostitution.

Fiolleau, who runs SaveTheWomen to help women exit prostitution, jokes with naysayers who say prostitution is too old and entrenched to be eliminated, observing that prostitution cannot be the world’s oldest profession because, “some schmuck had to get a job first to pay for it.”

On a more serious note, she says that their is nothing empowering about prostitution. As a prostitute, “You don’t have the choice of who comes to see you. You just see whoever for the money.

Fiolleau believes the new law will discourage girls from entering into prostitution.

Not all are thrilled with the government’s intent to curtail prostitution. “The world’s oldest occupation will meet its match, apparently, in Canada’s own Peter MacKay,” mocked Robyn Urback in a column for the National Post on Tuesday.

Urback called MacKay’s position that the bill would face and survive legal challenges evidence of “confirmation bias to the nth degree.”

“The plan is also aspirational to the point of parody and hopelessly unrealistic.”

MacKay plans to present the finalized bill to the House for debate and passage in the fall, a few months prior to the December 19 deadline imposed by the Supreme Court.