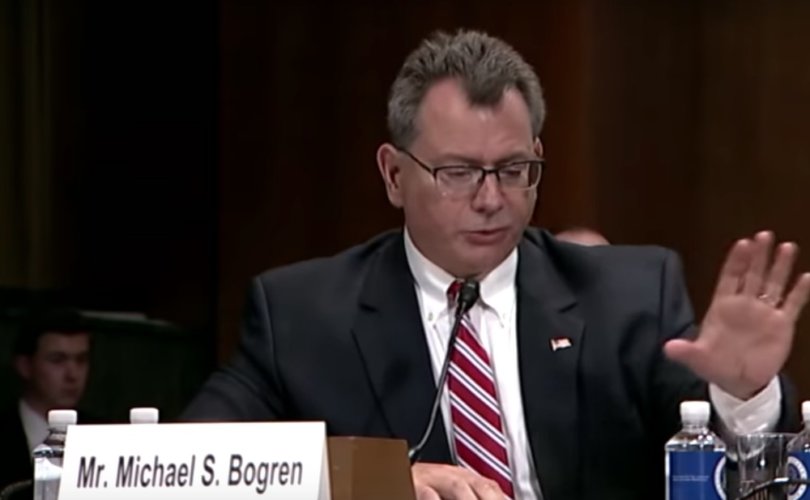 WASHINGTON, D.C., June 3, 2019 (LifeSiteNews) — GOP U.S. Sen. Josh Hawley of Missouri and other conservatives have been sharply critical of President Donald Trump’s choice to serve on the federal court of the Western District of Michigan out of concerns for the nominee’s position on religious freedom.

Michael S. Bogren, also recommended by Michigan’s two Democrats in the U.S. Senate to serve on the federal court, was hired as an attorney to represent the City of East Lansing in a dispute with Steve Tennes, a local farmer in Michigan, in Country Mill Farms v. City of East Lansing. Tennes refused to host same-sex “marriages” at his farm and because of that was refused permission to sell his wares at a city farmers' market. Tennes is a Catholic who rents his farm for marriage ceremonies but is unwilling to host same-sex weddings.

In Bogren’s briefs for the city’s defense, he frequently mentioned the Ku Klux Klan. According to experts cited by Ramesh Ponnuru of the National Review, Bogren opposed letting the Catholic Church file a brief in the case, which may suggest an animus on his part against the Church. Bogren also gratuitously criticized the plaintiffs, the experts found, for their supposedly selective fidelity to Catholic teaching.

According to critics, Bogren claimed mistakenly that the Bob Jones University v. United States case had established that religious belief is not a constitutional defense against a claim of discrimination on the basis of race, sex, or sexual orientation.

A group of conservatives, including former Attorney General Edwin Meese, have co-signed a statement opposing Bogren’s nomination. The letter read, “Conservatives strongly believe in the Constitution’s guarantees, especially the First Amendment right to the free exercise of religion. This right encompasses not only the freedom to worship, but also the right to live consistent with one’s faith.”

It went on to say that the conservative signatories were “shocked and dismayed” by testimony Bogren offered before the Senate Judiciary Committee on May 22. The letter said Bogren has made statements that “reveal he does not understand the First Amendment’s basic protections of religious liberty.”

Echoing the thrust of the Obama administration’s “freedom of worship” understanding of the free exercise of religious freedom guarantee in the U.S. Constitution, Bogren claimed Tennes’ argument that “my religion compels me” is no protection from being banned from the public market because of his religion. According to the signatories of the letter, Bogren also signed onto motions that characterized the Tennes family’s practice of their Catholic faith as ‘invidious discrimination against the LGBT community.”

“The other side of that discriminatory coin is found on the website of the White Camelia Knights of the KKK … group states: ‘The Klan has always taken a strong stance against interracial marriage. What most people don’t understand is it’s against our Heavenly Father’s law.’ Again, an adherent of that particular brand of Christianity who ran a business similar to the plaintiffs’ business would not be able to invoke the free exercise clause to avoid the anti-discrimination provisions of Federal, State and local laws that apply to public accommodations if interracial couples were refused service.”

Moreover, Bogren questioned the sincerity of the Tennes family’s faith:

“Although plaintiffs rely on the teachings of the Roman Catholic Church to support their position on same-sex marriage, plaintiffs are rather selective about how they apply the tenets of the Church on other aspects of marriage when it comes to their own business.”

During Bogren’s testimony before the Senate Judiciary Committee, he defended his views before Sen. Hawley, who offered the nominee an opportunity to retract his statements. Bogren, however, stood his ground.

Later, asked whether Bogren could redeem himself, Hawley said, “He could say he was wrong, that he regrets saying those things — regrets the animus,” against the Catholic family. “To compare a Catholic family, following the teachings of their church,” Hawley said, “as akin to white supremacists and radical minds who want to strip women of all rights, I mean, that's just ridiculous. It's beyond ridiculous. It's offensive.”