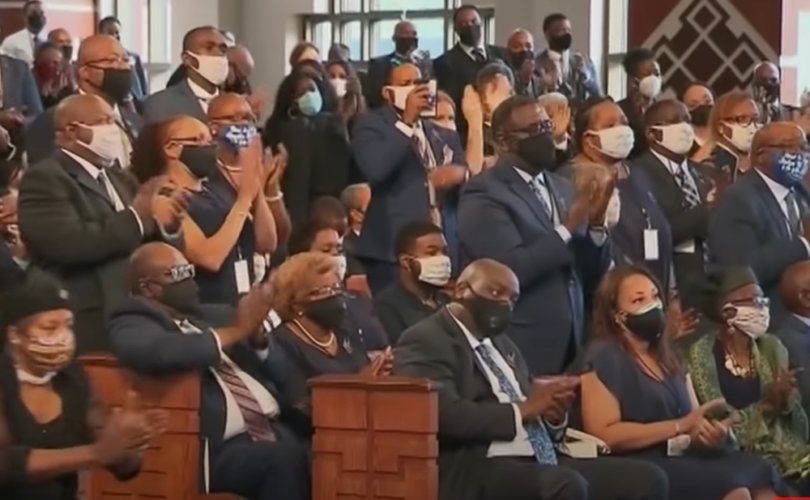 Attendees at the funeral of Rep. John Lewis pack the church as most Americans are banned from doing the sameYouTube / screenshot

ATLANTA, Georgia, July 31, 2020 (LifeSiteNews) — Conservative commentators are criticizing Democrat elites for failing to observe so-called social distancing and other measures which they have insisted are necessary while at a funeral service for Democratic congressman John Lewis.

Former Presidents Barack Obama, George W. Bush, and Bill Clinton were all in attendance and spoke at the service in Atlanta, Georgia, as well U.S. House Speaker Nancy Pelosi.

Images from the service shared to social media show a packed church with many members of the congregation not “social distancing” – a measure which has been insisted upon for churches around the country in response to the coronavirus crisis and which the Georgia state government says is currently required.

“Why okay for people to be INSIDE A CHURCH, NOT socially distanced, with robust singing/preaching #JohnLewisfuneral but average folk barred from holding graveside outdoor services with more than a few people or be with a loved one at death in hospital? Why people don't have trust,” American bioethicist and conservative commentator Wesley Smith posted to Twitter.

Why okay for people to be INSIDE A CHURCH, NOT socially distanced, with robust singing/preaching #JohnLewisfuneral but average folk barred from holding graveside outdoor services with more than a few people or be with a loved one at death in hospital? Why people don't have trust pic.twitter.com/6Kp9q0C5nT

When another Twitter user pointed out that those in attendance were wearing masks, Smith posted an image of the funeral showing congregants clearly not observing “social distancing” measures.

This photo should be posted in every church in America. pic.twitter.com/HWsn7XzrWH

Hey kids remember all those rules about church? Where we have to distance? And we can’t sing? And only a few of us can attend at any one time? That’s all out the window now. Check out John Lewis’s funeral. pic.twitter.com/6hNuKRzl5S

The maskers and distancers are liars through and through. This is John Lewis‘s funeral today. These are the folks that insist that we wear masks and distance everywhere. They are liars. I attended a funeral this Spring and no one was allowed to be there. pic.twitter.com/8YbMlPli1r

Others referenced the similarity between congregants at the funeral not following the lockdown/coronavirus protocols they demand of the rest of the country with the mainstream media’s lionizing of massively crowded Black Lives Matter (BLM) protests across the United States. Those protests have shown little regard for “social distancing” or other draconian coronavirus lockdown measures, yet they have been praised by the media which at the same time criticized President Donald Trump’s reelection campaign for its decision to resume in-person rallies.

Two sets of rules. One for our masters who get to crowd into a church and sing songs. And the rest for us. Yet another reason I do not believe in the propaganda of masks and distancing. pic.twitter.com/eGqD27ad5q

Fox News anchor Tucker Carlson also drew particular attention to Obama’s “eulogy” in which the former U.S. president called for the end of the Senate filibuster, with Carlson labelling Obama’s address “a divisive and deeply dishonest campaign speech in church.”

“Imagine if some greasy politician showed up at your loved one’s funeral and started throwing around stupid partisan talking points about senate procedure. Can you imagine?” Carlson asked.

“You would be shocked if that happened. Desecrating a funeral with campaign slogans? What kind of person would do that? Democrats in the audience didn’t blink, they cheered. It all seemed normal to them and why wouldn’t it? Political power is their religion.”