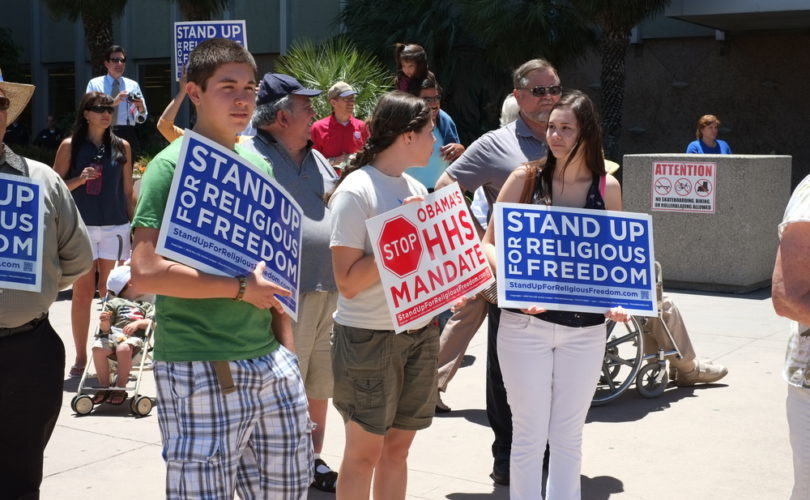 February 3, 2017 (LifeSiteNews) — A pro-natural marriage advocate at the conservative Heritage Foundation said President Trump “should not cave” to LGBT activists by failing to issue a strong executive order defending Americans’ religious liberty, a leaked draft of which has been the subject of intense criticism on the Left.

Heritage senior fellow Ryan Anderson said, based on a document first leaked to the leftist magazine The Nation, that the order would be a “great place to start” for President Trump to honor his pledge to strongly defend the freedom of people to exercise their spiritual and moral conscience.

Homosexual and transgender activists are vociferously complaining the proposed order would constitute a “license to discriminate” against LGBTQ individuals and events like homosexual “marriages.”

Based on the leaked draft of the executive order, Anderson describes what it would do:

Anderson, the Heritage Foundation’s William E. Simon senior research fellow in American Principles and Public Policy, said the draft executive order text was released to a far-left news source as a means of generating outrage to stop it.

“But the president should not cave,” he writes. “He should stand up to the liberal outrage and hostility to ordinary American values that fueled his rise in the first place.”

Administration officials and veteran Republicans in Washington, D.C., say that a number of proposed orders circulate for consideration in a new administration and that there is no guarantee that this or any leaked policy will survive.

“We do not have plans to sign anything at this time but will let you know when we have any updates,” Trump spokesman Sarah Huckabee Sanders told ABC News. Like most media, the ABC report by Rick Klein characterized the potential Trump order not as protecting religious liberty but as “a possible weakening of protections designed to shield LGBT individuals from discrimination.”

“They are complaining because [under such an order] virtually no one will have the ability to force another to honor sexual perversion as the price of being allowed employment and people who don’t need birth control, like Catholic women religious, won’t have to buy insurance policies that covers them,” he wrote.

Nevertheless, homosexual and transgender activists are portraying the potential Trump order as a direct threat to their “rights.”

Writes Zack Ford, an LGBT activist who writes for the leftist news site ThinkProgress, “To be clear, it doesn’t protect people regardless of what they believe on LGBT issues, sex before marriage, or abortion; it only protects people who take the religious conservative position on those issues. It is a flagrant endorsement of one set of religious beliefs over another.”

Anderson insists the proposed executive order would not overturn the 2014 Obama LGBT executive order on federal contractors just renewed by Trump. “These [religious liberty] protections take nothing away from anyone. … They protect diversity and pluralism and tolerance,” he writes.

But other social conservatives like Brian Camenker of Mass Resistance are dubious that Trump’s “LGBTQ” executive order and one expected to protect religious freedom can peacefully coexist. They believe the fight against the far-reaching LGBTQ agenda should not be limited to a defensive fight for religious liberty.

“Rights” based on homosexuality and gender confusion (transgenderism) are “completely incompatible with religious liberty,” Camenker told LifeSiteNews. He urges pro-family leaders to tell President Trump, regarding federal LGBTQ policies and regulations: “Take it all out!”

“There are many more anti-religious freedom policies of the Obama administration that must be reversed. … People of faith should not be punished by the government for living in accordance with their beliefs,” he wrote.