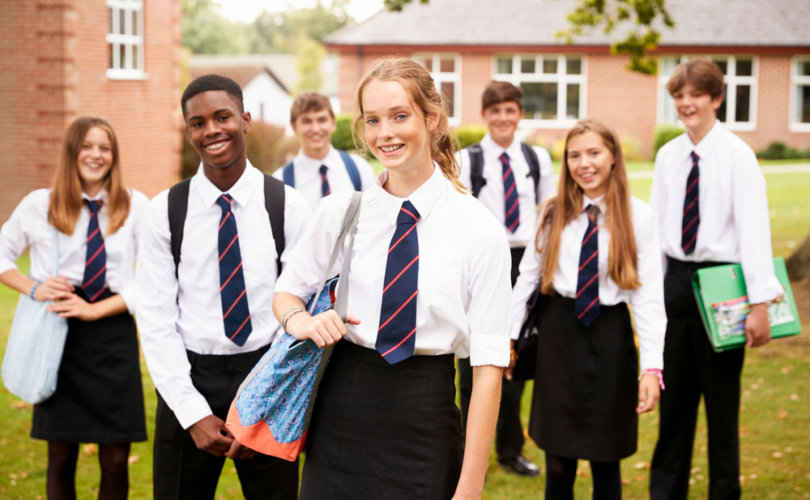 LELAND, North Carolina, April 5, 2019 (LifeSiteNews) – A North Carolina charter school must allow its female students to wear pants or shorts in addition to skirts, according to a federal judge who has ruled that the school’s gendered dress code violates the Equal Protection Clause of the U.S. Constitution.

The dress code of Charter Day School (CDS) in Leland previously required girls to wear skirts, skorts, or jumpers with leggings (though they could wear pants or shorts on gym-class or field-trip days, which the school argues ensures their ability to fully participate in student activities). Several parents objected, and in 2016 the American Civil Liberties Union (ACLU) of North Carolina filed a lawsuit against the school on behalf of three families.

“I was inspired to push back against the ridiculous notion that girls needed to wear a skirt or dress to be respected and to ‘promote chivalry,'” one of the mothers, Bonnie Peltier, told Today. “I chose to send my child to the school with the best academic record, but that didn’t mean I let her civil rights be checked at the schoolhouse door. Having a choice doesn’t mean giving up your voice, or not speaking out when something is wrong.”

“The options for skorts, skirts, or jumpers with leggings, was explicitly addressed, as were the other components of the code. The code was not a unilateral decision by the board or any individual, but rather by the parents who were the school’s community,” CDS board secretary Baker Mitchell responded.

In a 2015 letter, attorneys representing CDS argued that neither federal Title IX rules nor the state charter school law forbid sex-specific garment requirements and that the policy’s rationale was academically sound. They quote Mitchell as explaining that the dress code “has contributed to producing a focused learning environment with respectful, dignified relationships,” then argue that this “rational relationship is evidenced by the fact that CDS consistently ranks as the highest scoring school in the county on North Carolina’s End-of-Grade tests.”

The letter also notes that, far from her daughter being harmed, one of Peltier’s own emails admits that her daughter was “so excited to start [school] on Monday that she has been sleeping in her school uniforms every night.”

Nevertheless, Senior U.S. District Judge Malcolm Howard ruled that the policy “violates the Equal Protection Clause” of the Fourteenth Amendment because it “causes the girls to suffer a burden the boys do not, simply because they are female.”

“[T]he skirts requirement in this case is not consistent with community norms,” he declared. “Women (and girls) have, for at least several decades, routinely worn both pants and skirts in various settings, including professional settings and school settings […] While defendants argue the skirts requirement is based on the traditional values approach of the school as a whole and is in place to instill discipline and keep order, defendants have shown no connection between these stated goals and the requirement that girls wear skirts.”

Howard further argued that the policy harms girls because it “renders them unable to play as freely during recess, requires them to sit in an uncomfortable manner in the classroom, causes them to be overly focused on how they are sitting, distracts them from learning, and subjects them to cold temperatures on their legs and/or uncomfortable layers of leggings under their knee-length skirts in order to stay warm.”

Conceding defeat, Mitchell responded that “[t]o keep academics a top priority and to avoid diversions while the uniform policy litigation continues, our school will add belted shorts and pants as additional options to the current girls’ uniform options of skorts, jumpers, and skirts as decided by the parent community in 1999,” StarNews Online reports.

Though unaddressed in this ruling, conservatives worry that precedents that continue to dismantle sex-specific clothing requirements may extend from girls rejecting skirts to boys choosing to wear them. Last year, federal judges ruled that a Michigan funeral home had to allow a gender-confused male employee to dress as a woman.