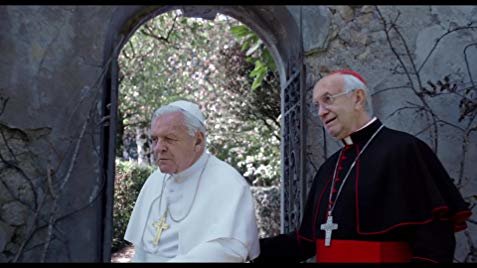 The Two Popes was released by the Netflix online streaming service in December, meriting praise from liberals for its fictional account of the relationship between the two men. Based on the premise that former Cardinal Jorge Bergoglio went to the Vatican to tender his resignation to Pope Benedict XVI, it stars veteran English actors Jonathan Pryce and Anthony Hopkins.

The screenplay for The Two Popes was adapted from The Pope, a stage play that was based on an earlier nonfiction book penned by Anthony McCarten (58), a Catholic from New Zealand. McCarten’s previous screenplays include the biopics Darkest Hour (2017), The Theory of Everything (2014), and Bohemian Rhapsody (2018). Each of these films had leads that won the Oscar for “Best Actor.”

The announcement of the winning Oscar nominations will be televised on February 9.

The Two Popes was directed by Fernando Meirelles, a Brazilian who helmed City of God (2002), for which he received an Academy Award. A former Catholic and self-described agnostic, Meirelles has said he expects Pope Francis to reform the Catholic Church but does not think any change will come in Church teachings about abortion. He said in December that “the work Francis is doing in the Church has been very important for changing many things that certainly had to change. I believe, if it were up to him, that there would be even more changes.”

The Two Popes has received considerable attention and hype, especially among admirers of Pope Francis. For example, a huge full-color billboard advertising the film was displayed in December on the side of a building owned by the Vatican, just outside St. Peter’s Square.

Fr. James Martin, SJ wrote on social media that the film was “beautifully written and acted” and showed “sensitive and nuanced portrayal of the two pontiffs.” Pro-LGBTQ Fr. Martin has been notable not only for his support for the current Pope but also for his views about same-sex relations, which have been condemned, for example, by Cardinal Raymond Burke as departing from authentic Catholic moral teachings about sexuality and marriage.

At First Things, reviewer John Waters wrote a withering analysis of the film, saying of the portrayals of the two Popes: “These men bore no resemblance to the real-life men they were supposed to represent. That’s fundamentally why The Two Popes is a dangerous and misguided movie.”

A review by Catholic News Service opined of the “glossy but highly speculative account of supposedly real events” that screenwriter McCarten and director Meirelles “ill-advisedly try to extol Pope Francis (Jonathan Pryce) by trashing retired Pope Benedict XVI (Anthony Hopkins). They even go so far as to give brief screen time to two people who label the pontiff emeritus a Nazi.” Also, National Review published an analysis titled Lies of The Two Popes, saying it is a “fantasy built on lies.”

The announcement of the Oscar nomination for The Two Popes comes just as Pope Benedict XVI and Cardinal Robert Sarah published From the Depths of Our Hearts, which offers a meditation on the value of priestly celibacy in the Latin rite of the Catholic Church. While the English edition is due to be published by Ignatius Press in February, excerpts of the French edition emerged Sunday.

In October, as an outcome of the Amazonian Synod in Rome, a formal proposal to ordain mature married men, so-called “viri probati,” to the priesthood was presented to Pope Francis as a means of addressing shortages of priests in the vast region. The Pope is studying the synod’s proposals, which include proposals for increased missionary activity, environmentalism, and sensitivity to ethnic and cultural differences. His response is expected later this year.

In January 2019, Pope Francis told reporters while returning from a visit to Panama, “Personally, I believe that celibacy is a gift to the church. I'm not in agreement with allowing optional celibacy,” and he added, “A phrase St. Paul VI said comes to mind: 'I would rather give my life than to change the law on celibacy.'” Confusingly, Pope Francis admitted, however, that “there could be some possibility” of ordaining married men in remote places that seldom have Masses because of a lack of priests.

When papal spokesman Matteo Bruni was asked by journalists on Monday to respond to the publication of the book by the pope emeritus and Cardinal Sarah, he referred questioners to Pope Francis’ remarks of last year. However, Bruni reiterated that Pope Francis signaled that “some possibility” remains of ordaining married men for service in remote areas. Where “there is a pastoral necessity,” Bruni quoted Pope Francis, the “pastor must think of the faithful.”